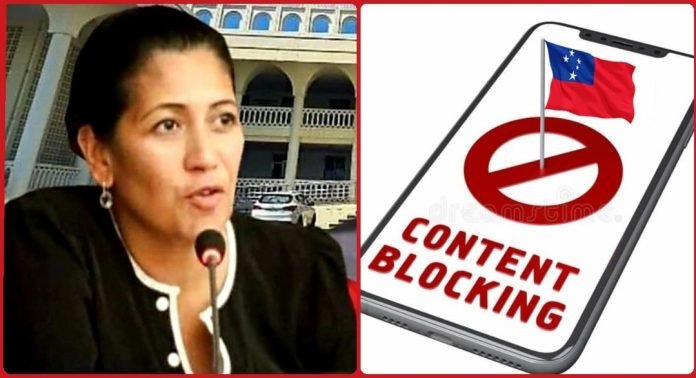 Sunday 31 October 2021 Apia Samoa. An 18 year old school boy from Savaii, convicted of two counts of incest for having sexual relations with his younger sister after watching pornographic material that popped up on the Vidmate App was described by the presiding judge as “himself a victim of unregulated content on the internet”.

Justice Tologatā Tafaoimalõ Leilani Tuala-Warren has established a reputation for handing down “double figure” jail sentences for perpetrators of domestic and sexual violence against women and children.

“Those who make a profit from providing this service should not be given free reign. They, the service providers, must be held to a higher standard given that they influence the lives of many young people through the content which they allow,” said Justice Tuala-Warren.

Tologatā Tafaoimalo states in her ruling that like many young children and teenagers in Samoa, the defendant was exposed to harmful internet content accessed on his phone, which led to acts of incest with his 12 year old sister, causing her to fall pregnant.

“This case is truly tragic for this family, the victim being so young and the accused himself being a teenager.”

The Supreme Court judge said this was an issue “that falls squarely within the domain and control of internet service providers in this country”.

The ruling highlights that Samoa has no existing laws to regulate internet content accessed by children and teenagers, and calls on service providers to either self-regulate in the meantime, or otherwise be held accountable.

“Although they may not have a statutory obligation to block pornographic material on mobile devices, their sense of social responsibility should lead them to self regulate as this unregulated content leads to sexually deviant behaviour as in this case..

“The protection of our most vulnerable members of society, our children and young persons, is the responsibility of everyone in this country, and service providers being part of this country, should also uphold their responsibility in protecting our children, and if they do not, they should most definitely be held to account,” continued Justice Tuala-Warren.

A former CEO of the Samoa Law Reform Commission (SLRC) who had helped establish the commission in 2008, Justice Tuala-Warren calls on SLRC to provide assistance to the Government by reviewing existing laws that regulate internet content.

“And if there aren’t any, then recommend how Samoa can better protect children and young persons, through legislation which makes it mandatory for service providers to block harmful and inappropriate content,” states Justice Tuala-Warren in her ruling.

“Children and young persons are unable to make rational decisions about what they should view on their mobile devices. Parents often take on the role of scrutinizing content, but fall short.”

Justice Tologatā quoted from a previous incest judgment of Justice Vui Clarence Nelson where he says, in view of the Samoan cultural context of the va tapuia (sacred space) between brother and sister: “Cases like this bring with it therefore their own punishment on offenders in terms of social ostracism and disgrace. That endures far longer than any sentence the court can impose..”

“This is also a reminder to parents and guardians to monitor what their children and teenagers watch on the internet,” warns the Supreme Court judge.

Justice Tuala-Warren highlighted the need for adequate rehabilitation for the child victim, referring to Samoa’s ratification of the CRC – Convention on the Rights of the Child, in 1994.

“Article 39 of the CRC deals with rehabilitation of child victims, in that they should receive special help to physically and psychologically recover and reintegrate into society with particular attention paid to restoring their health, self respect and dignity..

“I see nothing in the victim impact report which helps the recovery of the child victim in this case. She is 12 years old, has given birth and no doubt is confused now about her sexuality and her relationship with her older brother..

“This is an area which needs urgent attention,” reiterated Justice Tuala-Warren before adding that Samoa’s Victim Support Group (SVSG) should be supported for the extensive work they do in victim rehabilitation.

“Samoa Victim Support Group is the only organization which focuses on victims, and they do a tremendous amount of work. Some specialized assistance for child victims is needed. SVSG is suitably placed to provide this, but we as a society must assist SVSG to be able to provide this assistance”.

In Court as Justice Tologatā Tafaoimalo read out the sentence, the teenage boy no taller than 5 foot tall, stood in the box with his head hung low. Sitting behind him were his parents, aunties and uncles, extended family as well as the family’s church minister, the village mayor, and two of his eight siblings who could not hold back tears.

“Your parents, teachers, village mayors, church ministers, family matai, and guardian have all written in support of you. They have provided glowing references about you. I acknowledge that they are all in Court today in support of you..

“I accept you are genuinely remorseful, and you have apologized to your family and sister and you have reconciled. I take into account the village fine and the ifoga to the village and extended family. I will also give you a significant deduction for your youth. I lastly take into account your early guilty plea to the charges which has avoided the need for you both to relive this offending,” said Justice Tuala-Warren.

“This young accused is himself a victim of unregulated content on the internet”, Justice Tuala-Warren again reiterated.

Deliver Copies to Lawmakers and ISPs

The Supreme Court judge then requested Prosecution to deliver copies of her decision to all relevant players for urgent action.

“Copies of this decision should be given by Prosecution to the General Managers of both Vodafone and Digicel..

“I also ask that a copy of this decision be sent by Prosecution to the Minister for Communication and Information Technology, the Regulator, and the Samoa Law Reform Commission”.

According to Datareportal, there were 130 thousand internet users in Samoa in January 2020.

Internet penetration in Samoa stood at 66% in January 2020.

The same report stated the number of mobile connections in Samoa as at January 2020 was equivalent to 73% of the total population.

There were 144.4 thousand mobile connections in Samoa in January 2020.