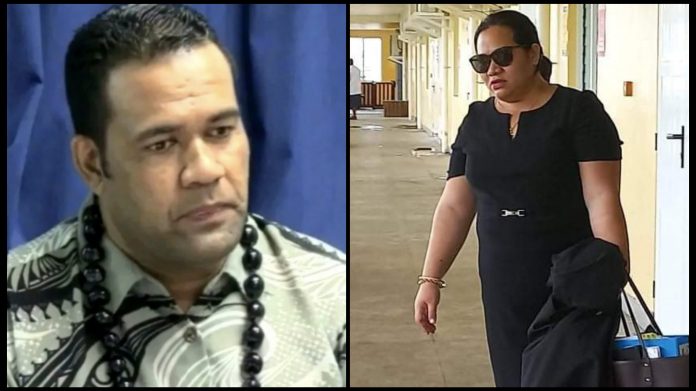 Afualo faces a charge of possession of narcotics and possession of utensils, as well as charges relating to  illegal weapons found during the police raid.

Ms Marie Fanueli, also of the OEC, is jointly charged with Afualo.

Afualo has maintained his innocence throughout trial presided over by Justice Tologata Tafaoimalo Leilani Tuala-Warren, now in its second week

At the close of the Prosecution’s case, defense counsel, Magele Leone Su’a-Mailo filed a motion that there was no case for her client to answer, in relation to the narcotics charges.

Justice Tuala-Warren heard the motion on Tuesday morning and delivered her decision in the afternoon that the motion was dismissed.

“At this stage of proceeding, it is not for me to make credibility findings of the Prosecution witnesses. None of the prosecution witnesses gave evidence that was so absurd that I could not believe them.  Their credibility though, and the reliability and weight to be given to their evidence, which I will be able to assess later, are different matters..

“It is also not required of me to conclude as to the burden of proof as this stage. That takes place after careful and considered examination of the evidence. I am entitled to defer my consideration, perhaps to re-examine the evidence, perhaps to hear further final submissions from Counsel,” stated Justice Tuala-Warren.

“It does mean I am not binding myself to any conclusions as to what evidence I will in fact accept..I find that there is prima facie evidence”.

Justice Tuala-Warren said the weaknesses and inconsistencies pointed out by Defence Counsel were matters that could potentially affect credibility, reliability and weight of the prosecution evidence or in other words its strengths or weaknesses.

“It cannot be said at this stage that the Prosecution evidence taken at its highest is such that I, having properly directed myself could not properly convict the defendant..

“Having said that, it does not mean that I have decided on the guilt or otherwise of the defendant. All I am saying at this stage in ruling that there is a case to answer is that on the present state of affairs it would be open to me, after properly directing myself on the law, to convict if on mature examination of the evidence, I think it proper to do so.”

The no case to answer submission by Daryl Mapu was therefore denied.

Throughout the case, Defense Counsel for Daryl Mapu put to the Court and to Prosecution’s witnesses, that a man by the name of Pelepesite will be taking the stand to say that the home was his home, the illegal weapons are his, the drugs and utensils are his and even the black shorts Afualo Daryl Mapu was wearing.. are his.

Pelepesite is expected to take the stand on Thursday morning.