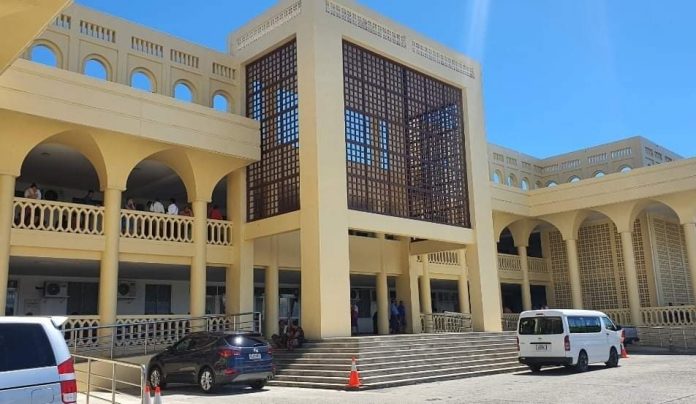 Filifili Jnr Pritchard and Alapati Hunt were arrested in February this year alongside another man and a woman during a drug raid of Pritchard’s home in Vaigaga where police seized cash, methamphetamine, marijuana, utensils, a weighing apparatus, live ammunition and a truckload of items suspected to be stolen goods.

The other two defendants were granted bail, however, police had strongly opposed bail for Pritchard and Hunt who have both previously served time for drug related offences.

At the time of the offence, Deputy Police Commissioner Auapaau Logoitino Filipo told media two of the four arrested were repeat offenders – “they’ve served time for drugs before”.

This week in the Supreme Court Justice Tuala-Warren handed down her decision after a bail hearing where both defendants asked to be released from police custody, to await the Court hearing set for early September.

Pritchard and Hunt are jointly charged with possession of narcotics being 7 mini zip lock bags containing 2.36grams of methamphetamine, 3 marijuana branches weighing 2grams, and loose marijuana leaves weighing 5.6grams. Charges relating to utensils are for glass pipes, a glass bottle with a hose, and a portable electronic scale.

The pair also face charges relating to possession of ammunition, being three live 22 ammunitions and one black caliber.

It was submitted that previous convictions were for marijuana, for which they had already served time in 2015. It was also argued that the quantity of narcotics alleged to have been in their possession is minimal.

It was submitted for Pritchard, 32, that he is a father of 4 and the main caregiver to this young children aged between 10 months and 11 years, and that his wife, who is a police officer, is currently pregnant due in July.

For Hunt, it was submitted that he also has 3 young children aged between 2 and 11. He stated that he accepts he was imprisoned for possession of narcotics in 2015 but his children depend on him for financial support and he would be willing to comply with whatever bail conditions imposed, for the sake of his children.

Prosecution strongly opposed bail for both defendants, quoting a high tendency to re-offend given their involvement with drugs and their previous convictions in 2015. Prosecution argued the defendants were charged with a serious offence with a penalty of 2 years to life imprisonment.

“The offence of possession of methamphetamine is a very serious one as reflected in the penalty imposed by Parliament. The Applicants are jointly charged with narcotics and firearm offences which in combination, is a concern to the Court as a public safety issue,” said Justice Tuala-Warren.

The judge referred to both defendants’ previous convictions for the same crime and highlighted the grave impacts of narcotics on society.

“In R v Fatu [2006] 2 NZLR 72 is was said that methamphetamine “induces aggressive and irrational behavior, and is regularly responsible for other offending involving extreme violence, a phenomenon not commonly associated with other drugs”.

For the argument that the defendants are innocent until proven guilty, Justice Tuala-Warren agreed, however, clarified in her decision, that a bail application is not concerned with whether or not those charged with crimes are innocent or guilty.

“A bail application is concerned with the question of whether a defendant should be at liberty pending the determination of guilt or innocence,” stated the Supreme Court judge with cited case law.

“When viewed in totality, I find there is just cause for the Applicants to be remanded in custody..

“The charges faced by the Applicants are very serious and if they are found guilty, there is a high likelihood of a custodial sentence given the combination of drug and firearm offences..

“Both have a previous conviction for possession of narcotics in 2015, the very charge that they are being charged with now”.

Justice Tuala-Warren concluded that a hearing date had been set for September 2022, which is 5 months away. “This is by no means an excessive amount of time to wait for a trial.”