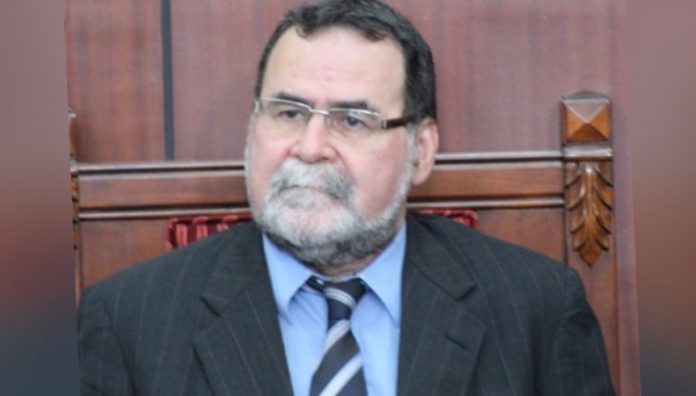 9 July 2021 Mulinuu Apia Samoa.  When the Supreme Court of Samoa set down its ruling that the swearing-in ceremony held under a tent outside the Maota Fono on Monday 24th May 2021 was unconstitutional and therefore void, they added a ‘tail’ directing the Attorney General to advise everyone concerned to convene Parliament within 7 days. That same June 28th judgment also set down an if-then scenario.

If Parliament does not convene in 7 days, then they would revisit their own decision and reconsider the lawfulness of the tent swearing-in, under the doctrine of necessity.

However, within that 7-day timeframe (that expired 4pm Monday 5th July), the Attorney General filed an application to appeal the additional orders set down in the June 28th decision.

Set down by Justice Vui Clarence Nelson on behalf of a three-judge panel of the Supreme Court with Justice Lesatele Rapi Vaai and Justice Fepuleai Ameperosa Roma, the judgment  includes many subtleties and addresses several issues at the heart of Samoa’s current political crisis, while accepting that the best way forward is to have all things settled with the Court of Appeal.

“It is however clearly apparent to us that whatever decision we make will be appealed by the unsuccessful party to the Court of Appeal”.

The judgment published in full below, directly addresses the late Sunday night proclamation by Samoa’s Head of State. It challenges the Head of State’s constitutional powers which the Court once again says, he seems to have been ill-advised about.

“We note Parliament has not been called as ordered and the Head of State has now taken the extraordinary unprecedented step of purporting to convene Parliament on 2 August 2021 subject to certain conditions being met.

“If not he seems to believe he has under the Constitution unlimited powers to “consider other options available to me”; presumably including further delaying a convening of Parliament if he sees fit to do so. At least that seems to be what he is being advised”.

The Supreme Court calls out the caretaker Prime Minister and Head of State for publicly defying the order to convene Parliament, and issues a reminder about the importance of the doctrine of separation of powers between the three pillars of Samoa’s democratic Government.

“The caretaker Prime Minister and his administration sadly now including the Head of State, which ideally should be a bipartisan non-political office similar to that of the Governor General in New Zealand, on several occasions since the decision have publicly defied the Supreme Court order and continued with attacks on the courts integrity and independence.

Notwithstanding the fact that it is the court in any functioning democracy that is charged with the responsibility of interpreting the Constitution and pronouncing on the law. A fact championed on many previous occasions by the very same personages”.

“The doctrine of the “separation of powers” which we accepted upon Independence as evidenced by our Constitution is derived from the noted 18th C French philosopher Charles Montesquieu. He wrote –

“There is no freedom if the power to judge is not separate from the                legislative and the executive power.”

The Supreme Court acknowledges the turmoil Samoa is in, and say they are of the view that the tent swearing-in may now need to be declared lawful, so that a government can be formed to lead the country following its general elections. It also accepts that at the time, 24 May 2021, “there were clear attempts to derail the convening of Parliament..”

“In the courts view the circumstances have now materially changed. It is also of the view that the current climate of the ongoing turmoil and uncertainty may well now justify the operation of the doctrine of necessity to validate the events of the 24 May 2021 swearing- in outside the Chamber of Parliament so that the business of lawful governance of the nation can proceed”.

The message that is loud and clear from the Judiciary, first issued in its judgment of 17 May 2021, and upheld in every other judgment handed down since the political crisis, is the need to convene the XVIIth Parliament of Samoa as a matter of urgency.

“We are severely concerned that some 90 days has now elapsed since the 2021 General Election. This is twice the time mandated by Article 52 for Parliament to meet. Hence why we consider time to be of the essence in this matter.”

The judgment in full: 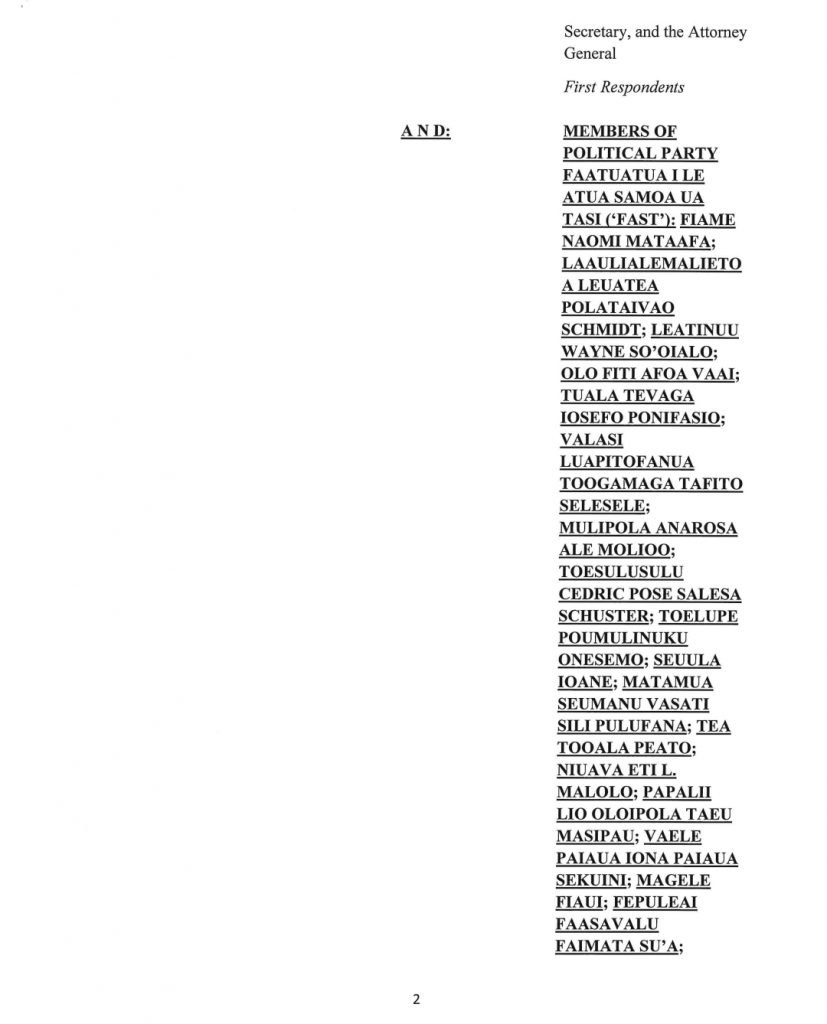 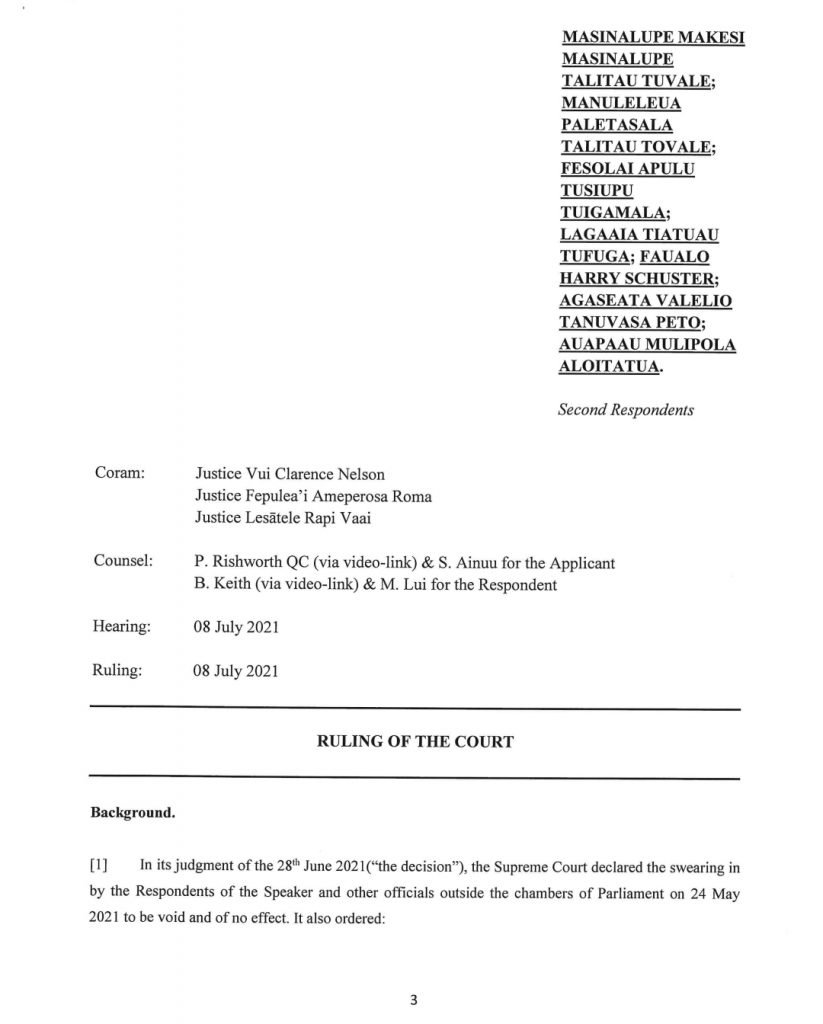 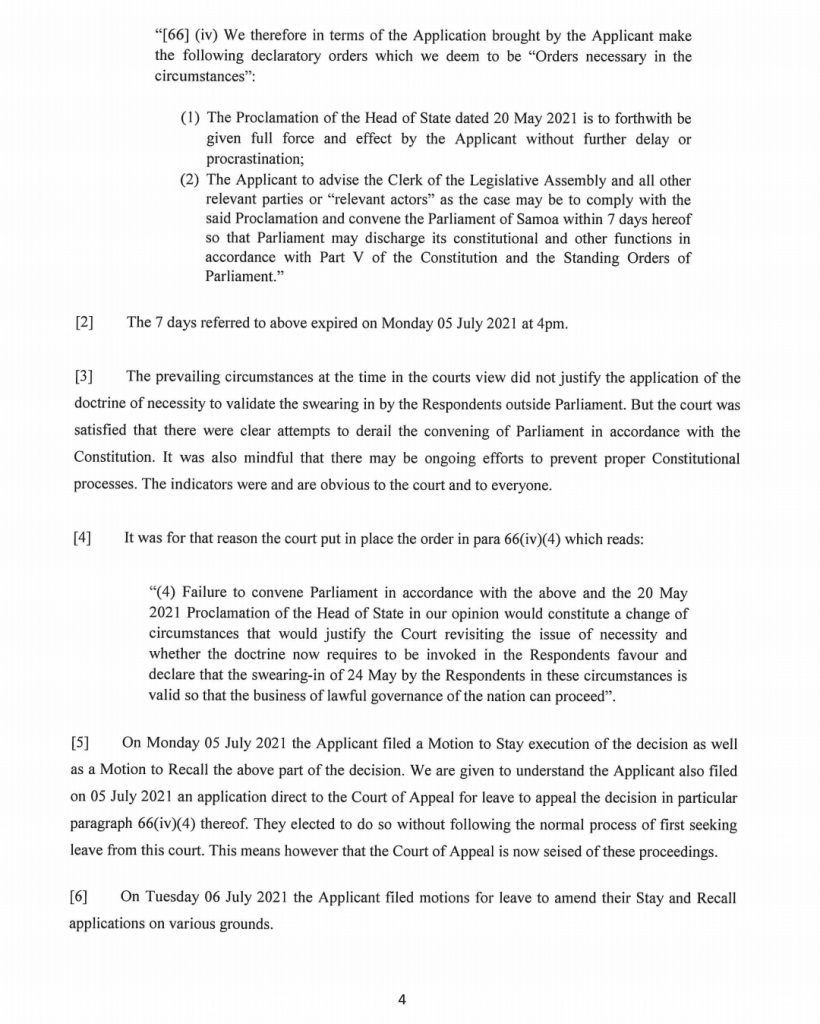 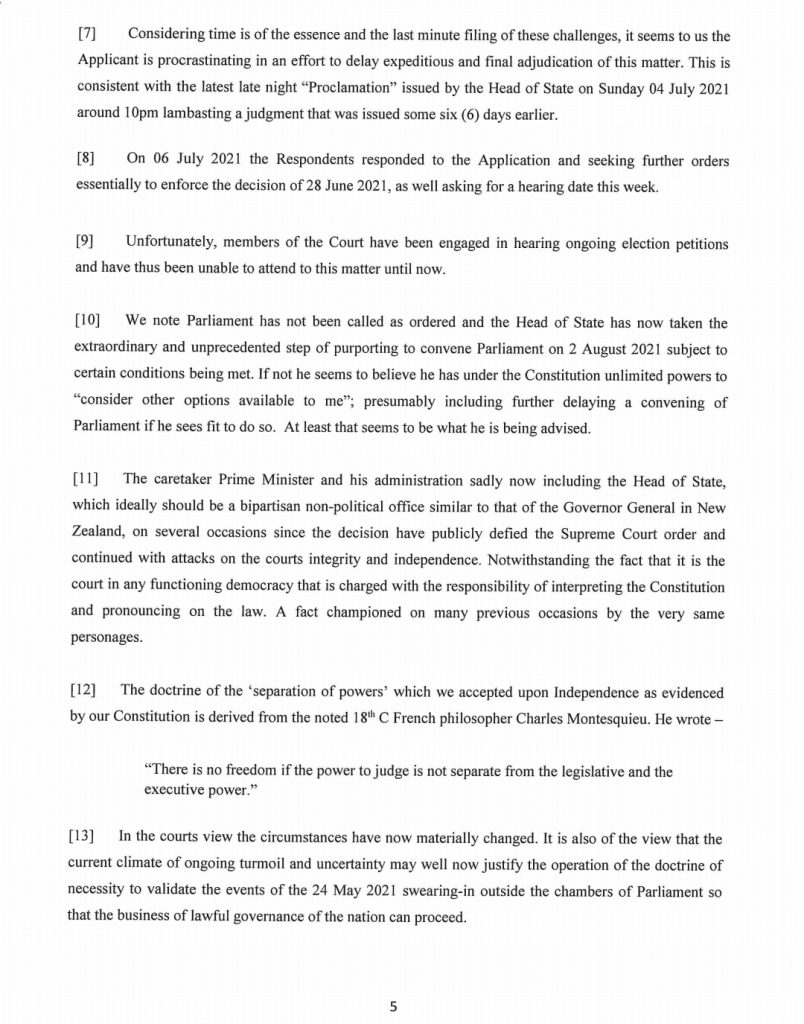 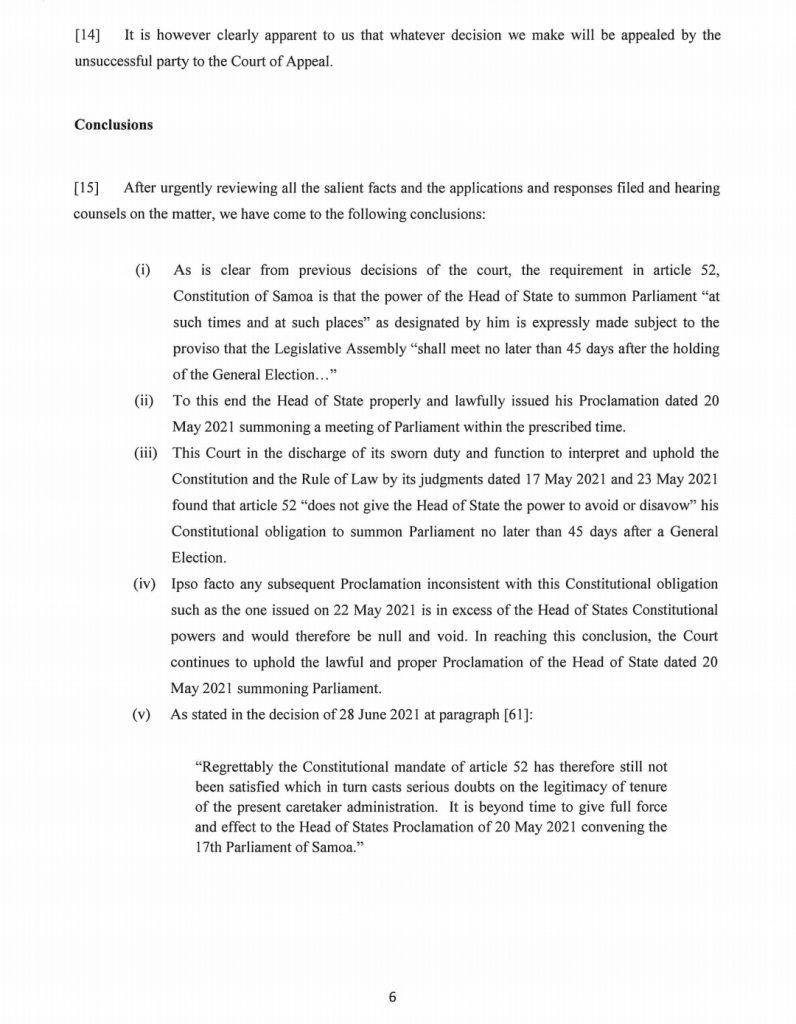 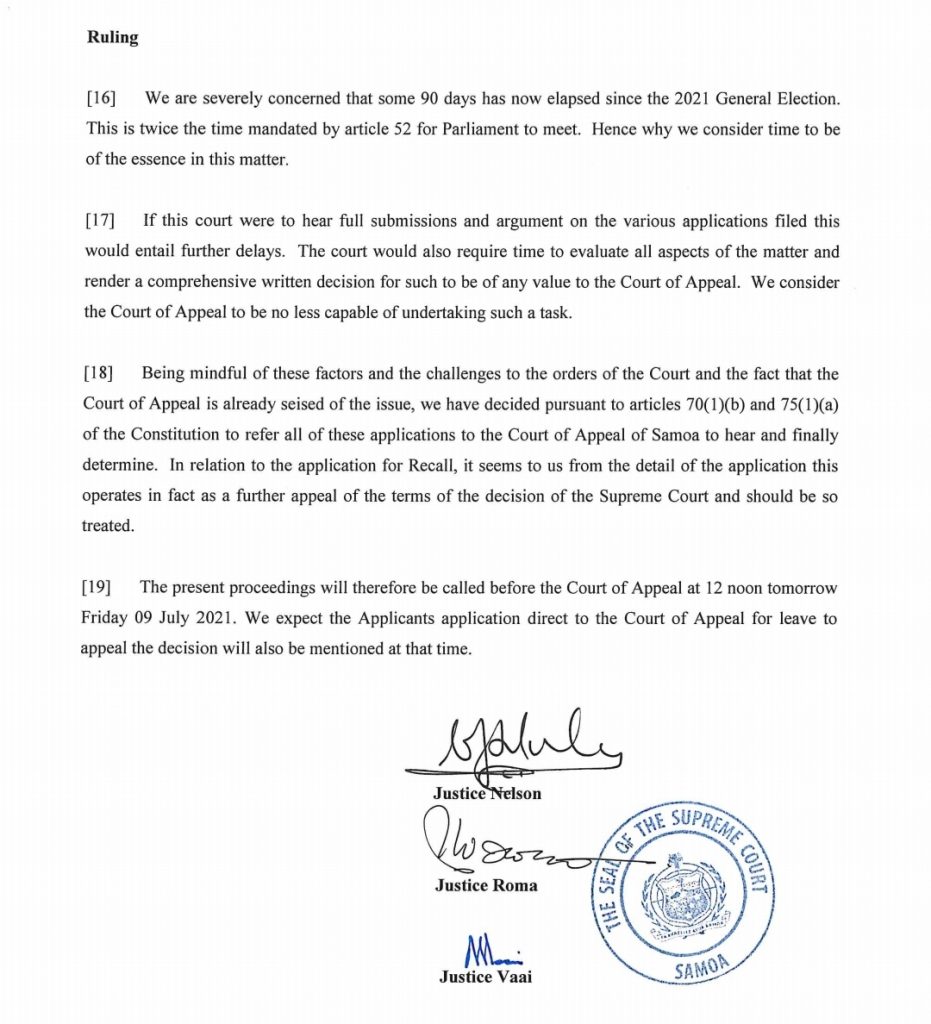