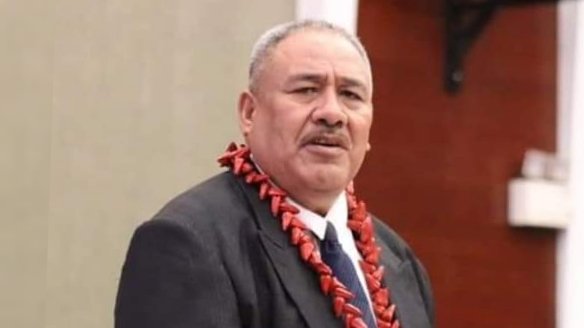 4 May 2022 Apia Samoa. Member of Parliament for Vaimauga No 1, Sulamanaia Fetaiai Tauiliili Tuivasa, has copped a 24 hour suspension from Samoa’s Parliament for raising his voice into a loud yell,  when he went to intervene in a war of words that had broken out between the Minister of Agriculture and Fisheries, Laaulialemalietoa Leuatea Schmidt, and opposition leader Tuilaepa Sailele Malielegaoi.

Somewhat caught in the crossfire, the MP for Vaimauga 1 explained that he was unhappy with members from both sides of the floor disrespecting the Speaker. They were ignoring the Speaker’s efforts to restore calm over Parliament. He said his yelling was directed towards the MPs who were disrespectfully arguing loudly over the Speaker. So he yelled in an even louder voice, that they should “just go fight” (O ane loa e fufusu).

This yelling triggered an intervention and motion by Prime Minister Fiame Naomi Mataafa, for Sulamanaia to be removed by the Sergeant at Arms.

Things quickly calmed and Sulamanaia walked out peacefully after being given the chance to apologise and explain himself to the Speaker.

Speaker of the House Hon Lio Papalii Taeu Masipau had just minutes earlier, announced his decision to refer a formal complaint against Tuilaepa and Laleailepule to a Select Committee of Parliament – a the Privileges and Ethics Committee with nine members whose names were also announced.

The complaint was filed by Hon Tuala Tevaga Ponifasio, MP for Gagagemauga No.1 and Deputy Prime Minster of Samoa.

Amongst other allegations, Tuala Ponifasio states in his letter of complaint that by being found guilty of Contempt of Court, Tuilaepa and Laleailepule have “brought shame and embarrassment upon the institution of Parliament, as well as the Members of Parliament, past and present.“

Last week the Speaker had announced that as per Standing Orders, the MPs implicated would be given an opportunity to respond, after which time he, as Speaker would then make the decision if the matter needed to be investigated further by the Select Committee.

The Misunderstanding that Caused the Heated Debate

Unbeknownst to Members of Parliament and to the public listening in, the response by Tuilaepa and Lealailepule had included their own letter of complaint against their accuser.

The heated exchange began when the Speaker did not give Lealailepule and Tuilaepa an opportunity to speak. The Speaker thinking they wanted to speak on the matter referred to the Privileges and Ethics Committee.

As Lealailepule and Tuilaepa stood to ask for a chance to ask a question (regarding their own letter of complaint against Tuala) the Speaker kept explaining that they would have plenty of opportunity to respond during the Select Committee deliberations and investigations.

Tuilaepa became frustrated with the Speaker and was heard asking why their letter of complaint against Tuala Ponifasio had not been acknowledged. Tuilaepa then suggested the Speaker was being one-sided and bias against them.

“You’ve read out their submission but have not announced our submission which we have already submitted to you, Honorable sir.”

The Speaker insisted that Tuilaepa would not be given a chance to speak about the decision to refer their allegations to the Select Committee, while Tuilaepa insisted that the Speaker had to acknowledge and announce their counter-complaint.

Tuilaepa accused the Speaker of being bias towards the government and this triggered a response from Laaulialemalietoa in defense of the Speaker.

Lealailepule also interjected, unhappy that Laaulialemalietoa had allegedly spoken about Parliamentary issues and the Speaker’s decision, to the media the night before.

In the heated exchange Tuilaepa and Laaulialemalietoa made personal jabs at each other, and hurts carried from last year began to emerge.

In a calming voice, the MP for Sagaga 2, Maulolo Tavita Amosa, asked the Speaker for a chance to interject, reminding MPs that they had only just opened  Parliament with a prayer.

When the dust settled and calm was restored, the Speaker explained to Tuilaepa that their submission or counter-complaint against Tuala was in the pipeline of Parliamentary processes, and in due time, would also be announced and dealt with accordingly.

Parliament continued with debates over amendments to the Labour and Employment Relations Act.