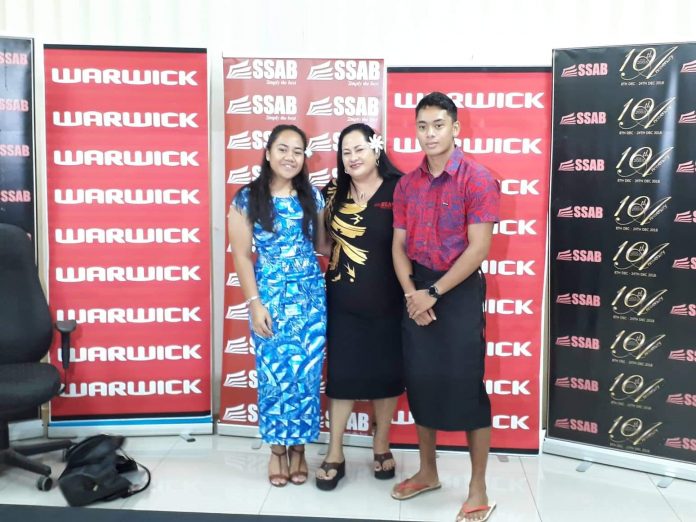 Students who received scholarship from the SSAB New Zealand Prime Minister initiative were inspired by words of Joyce Toafa and Joshua Leung Wai.

This was the message from the two guest speakers Joyce Toafā who had been a recipient of the SSAB scholarship award for three consecutive years and Joshua Leung Wai the eldest son of Tofilau Fiti and Aumua Ming Leung Wai.. The pair were chosen to give inspirational speeches to the students receiving scholarships from SSAB.

During Joyce’s speech she told the gathering that when she first started school she never considered herself as smart because she did not think she had the potential and she did not believe in herself.

She said the secret of how to come from nothing is to put a lot of effort into study and always put God first.

“On your part as a student try to invest in reading. The SSAB ambassador programme puts a big emphasis on the importance of reading,” she said.

“Hard work comes when you know where you want to be in life.

“When you are in school always remember that you are not only working for the betterment of your future but your family and your parents as well.”

She added that her motivation came from her father because he is the one who encouraged her to read.

“He made me read three books in a week, he made me read my book from school every day and woke up every morning just so he could ask me about my readings,” said Joyce.

“I came to realise that other students only became successful in life because they knew where they wanted to be and worked hard towards it.”

Lastly Joyce encouraged the young ones to always surround themselves with people that see the potential and greatness in them.

“Having the right friends around you is one other thing that’s of great help because if your friends have the same goal as you, you don’t have to worry about falling off the track.

“Work hard towards your goal and tell God about what you want, work alongside people who have the same goal as you and finally strive and work hard knowing that your parents and SSAB are rooting for your success.”

The Top Foundation Law Student at NUS, Joshua Leung Wai and sole recipient of a law degree scholarship to the Waikato University in New Zealand echoed what Ms. Joyce said.

“There’s a saying that goes spend money on experiences and not on material things,” he said.

“In this case time is money, invest your time wisely not only in studying but help your parents at home in doing chores and also get closer to the Lord and by doing this you will live a balanced life.”

He went on to say, he got to where he is now because he put all of his effort into his studies and at the same time he prayed.

“There is only one law scholarship to New Zealand the University offers every year this means if you want to be a lawyer you have to get the scholarship.

“Was it worth it?

“I am happy to stand before you all today and say yes it was worth it because I’m not only the top law student I also have the single scholarship.

“I was also accepted in both University of Victoria in Wellington and also Waikato University in Hamilton which is the university where my parents actually graduated as lawyers.”

“If you want to be a doctor, lawyer or an engineer you can but you have to put in the work and you have to work really hard and pray hard,” he said.

“Please be wise in your decision makings in life study hard and aim to get a scholarship in Foundation in order to achieve your dreams so you could be a blessing unto others and remember that nothing is impossible with God.”