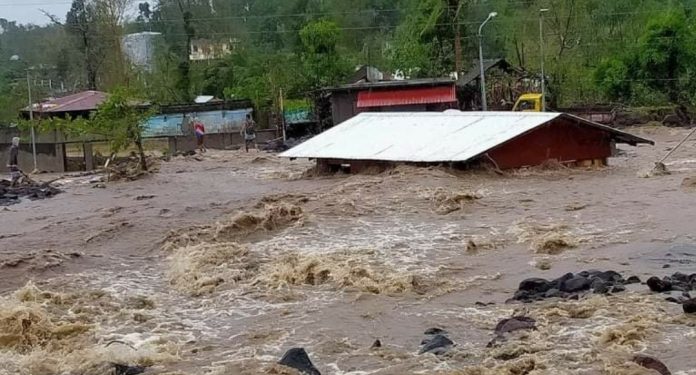 A super typhoon has hit the southern part of the Philippines’ main island of Luzon on Sunday, bringing catastrophic violent winds and intense rain.

Typhoon Goni is the strongest storm recorded anywhere in the world so far this year, and ahead of its landfall in the Philippines was gaining further strength with 225 kph (140 miles per hour) sustained winds and gusts of up to 310 kph (190 mph). This is the equivalent of a Category 5 Atlantic hurricane.

After making landfall, Goni was downgraded to a typhoon, with sustained wind speeds slowing slightly to 215 kph (140 miles per hour).

Samoa Global News IT Manager James Quizon, who lives in the Bulacan province in Central Luzon region was able to send through photos included in this article, before we lost connection with him due to power cuts in that area.

Provincial Governor Al Francis Bichara said there had been four reported deaths so far, including one hit by a tree and a five-year-old washed away after a river overflowed.

In total, up to 31 million people could be affected by the super typhoon, according to the Philippines’ National Disaster Risk Reduction and Management Council.

Philippine authorities evacuated nearly one million people to safer ground as Goni, which is known locally as Rolly, approached the eastern provinces.

On Sunday morning it made landfall in Catanduanes and Albay in the Bicol region.

The Philippines weather bureau said “catastrophic violent winds and intense to torrential rainfall” were expected to prevail over Bicol provinces as well as portions of Quezon, Laguna and Batangas, south of the capital Manila.

“This a particularly dangerous situation for these areas,” the bureau said in a bulletin at 8 p.m. ET.

The capital Manila is currently in the projected path of Goni, the 18th tropical storm in the country so far this year, with the weather bureau predicting intense rainfall and storm surges for the city. 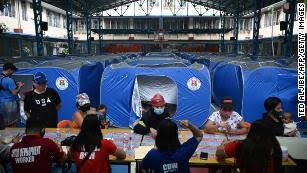 Residents register at a temporary shelter during an evacuation of informal settlers living along coastal areas in Manila on Sunday, as Goni moved towards the Philippine capital.
A third landfall is expected to hit Quezon province later in the day, as reported by local weather forecaster Lorie dela Cruz.

Storm surge alerts have been issued, while officials have also reminded those in evacuation centers to observe social distancing as the coronavirus spread is also a concern.

Dozens of international and domestic flights have been canceled as the civil aviation authority ordered a one-day closure of Manila’s main gateway, the Ninoy Aquino International Airport.

Goni is one of the strongest typhoons to hit the Philippines since super typhoon Haiyan, which killed more than 6,300 people in 2013.

It is the 6th tropical storm to impact the Philippines since October 1. Less than two weeks ago, at least 16 people were killed when Typhoon Molave swept over the country, causing flooding and landslides.

Our prayers for the safety of James and his family, and all the people of the Phillipines at this time.