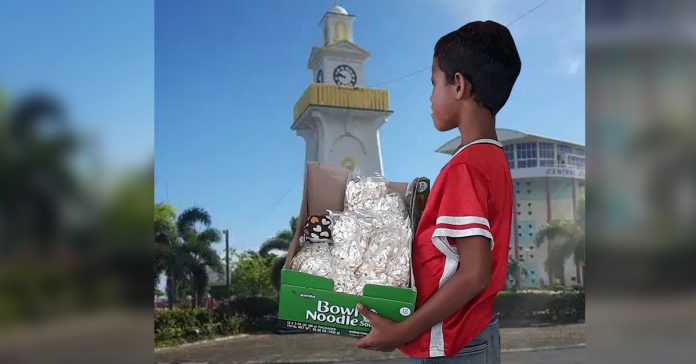 Eight year old Migo Tuitui wants to become a doctor in the future.

Migo will be going in to Year 7 at Malie Primary School but he started to sell popcorn for a living at the age of 6.

He told Samoa Global News that the money they get from selling popcorn goes towards his mother’s small business loan scheme with a finance company located at the SNPF Plaza in Apia.

The money is also used to put he and his siblings through school. Migo is the 4th of six children.

Speaking of his life as a street vendor he said he wakes up before daylight to catch the earliest bus into town to sell his popcorn packets.

“But I’m scared of my father because he told me if I don’t finish selling all 50 popcorn packets then I am not to come home.

“He also beats me up with a hose if I don’t sell all of the products.

“I want to stay home and focus on school instead of selling popcorn every day.”

Migo knows what he wants to be when he grows up. He confidently says that becoming a doctor is his dream.

“I want to help people, and most especially, I know that being a doctor means good money,” he says with a smile.

“Nobody in my family is a doctor but sometimes my siblings and I get sick and that is why I dream of becoming a doctor so my family don’t have to spend money on going to see a doctor.”

Migo said that it would be hard to fulfil his dreams when his street vendor duties get in the way of his studies. He says this makes it difficult to stay focused on his school.

“It’s hard especially begging people to buy my popcorn so that I could go home early,” he said.

The young fella said he is only allowed to use $1 from the money that he gets from the products to buy an ice cake or anything that costs $1 tala.

“It’s hard because sometimes I really want to eat something that cost $2 tala but I don’t have enough money and I’m scared of my father,” he said.

“Sometimes people will give me money without buying popcorn and when that happens I get really happy because then I get to buy something else other than ice cake.”

The eight year old will continue to sell his daily quota of 50 popcorn packets next week, even when school is back on.

“My father said we will go to school in the morning and then come and sell popcorn after school,” he said.

He waves goodbye and says that nothing will stop him from reaching his goal of becoming a doctor.