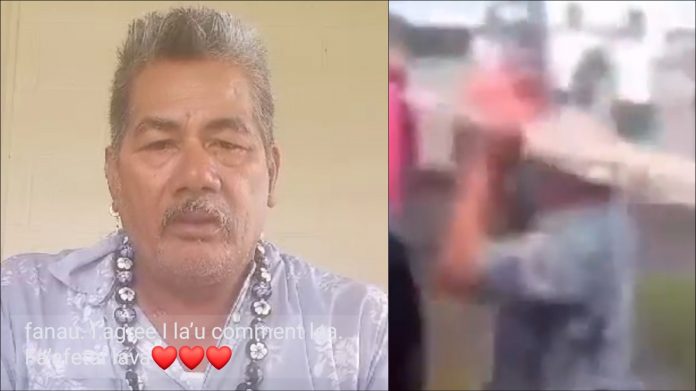 A video on social media posted by a member of the public last week shows Vaa Brown and others armed with large pieces of wood and steel rods, attacking two St Joseph’s College boys.

The video footage shows Vaa Brown raising a wooden plank high above his head before striking the young boy who was wearing his St Joseph’s College uniform.

One boy is seen laying on the ground covered in blood with a female student heard wailing over him and calling for help.

Police confirm the two students sustained serious head injuries and were treated at Motootua National Hospital last Friday as a result of the alleged attack by Brown.

Acting Police Commissioner Leiataualesa Samuelu Afamasaga in a press conference this week said, Mr. Brown is facing charges of being armed with a dangerous weapon, assault and causing grievous bodily harm to the students at the Savalalo market.

The Acting Commissioner said statements from students who were at the Savalalo market on Friday, alleged the brawl was started by some street vendors and youth no longer in school.

Vaa Brown is a known facebook activist. In a July 2022 live Fb post that is still up today, Vaa Brown violates the privacy of youth by walking through the Savalalo bus stop, filming boys and girls as they sat waiting for their bus home.

The live post then zooms in on two students sitting side by side, while the voice-over has Brown asking them why they haven’t gone home, accusing them of sexual promiscuity and calling them inappropriate names.

In a Facebook live filmed from the Mulinuu Courthouse toilets on Wednesday this week, Vaa Brown vehemently defends himself, and accuses Acting Commissioner Leiataua for being currupt.

He says the street vendors were victims of last week’s student brawl and according to Mr. Brown, they were trying to stop the students, and ended up getting hurt from rocks and medals that students were throwing at each other.

Mr. Brown denies hitting the students twice. He says he “only hit them once but not that hard”.

Brown inisisted his use of a large piece of wood as a weapon was the only way he could stop the students from fighting.

However, students from St Joseph’s College have said the boy seen lying on the ground in a pool of blood is well known at school as a quiet student who keeps to himself.

“He was walking along the Savalalo market area after the brawl dispersed, when he was suddenly attacked, just because he was wearing his St Jo uniform.”

Acting Commissioner Leiataualesa confirmed that Mr. Brown is currently on bail with strict conditions to sign-in weekly at the police station and not reoffend while he awaits to appear in the Supreme Court on December 6th.