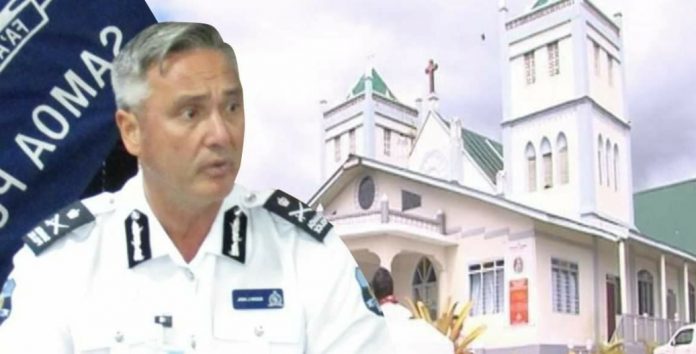 Police Commissioner Su’a Fuiavailiili Egon Keil has confirmed that no such police operation was in place last Sunday, and no police officers had entered Vaiusu Catholic Church as reported in a front page article of Samoa’s daily newspaper.

Su’a Fuiavailiili says he is deeply disappointed with what he has described as fictitious lies that impacts negatively on public safety, adding that the image used is from a police operation in 2019.

“The actions of the media in this instance have been reckless, misleading and irresponsible;

“It creates unnecessary animosity towards Police, and that is how you get divides in society that leads to civil unrest”, said Su’a.

In response the Samoa Observer have said they have taken steps to ensure a high level of service to the public is maintained.

“Thank you for the opportunity to respond. We don’t have anything to say about what the Police Commissioner is saying. That is his right;

“What we do want to say is that we do take our responsibility as a media organisation very seriously. That said, we accept that we don’t always get it right and where we fall short, we acknowledge that;

“For the story in question, we have taken internal disciplinary actions to ensure we provide a better service for the public and our readers in the future.”

The Police Commissioner says he reminds the media “that we are in unprecedented times, and the last thing we need is to cause more stress and division amongst our people”.

“We don’t need to ignite and fuel public anger”.

“It is our job to maintain the peace and uphold the SOE orders, but we also understand the va and the cultural concept of va fealoai,” said the Commissioner.

“We need religion in our lives; and our people are in churches for spiritual reasons..and we want them to feel comfortable and safe in their Churches.”

Su’a goes on to say that references to the Prime Minister’s comments politicises the issue.

“We will not get dragged into an election game… we are here to serve and protect, not cause fear or unnecessary stress to our people who are already stressed by the pandemic”.

Tiakono Paulo Mulipola of the Vaiusu Catholic Church told Samoa Global News that their parishioners were also shocked to see their church being mentioned in the article.

“There is no factual basis for what has been reported. I conducted mass on that day and no such police officers entered our parish,” said Father Matiasi.

Patele Matiasi added that the image used in the article is not Vaiusu.

The Police Commissioner, who has always been open to ensuring the media has access to information regarding police operations, says this incident is making him reconsider the Ministry’s working relationship with the Samoa media.

Su’a says reporters should be held accountable and calls on JAWS and the Media Council to take action.