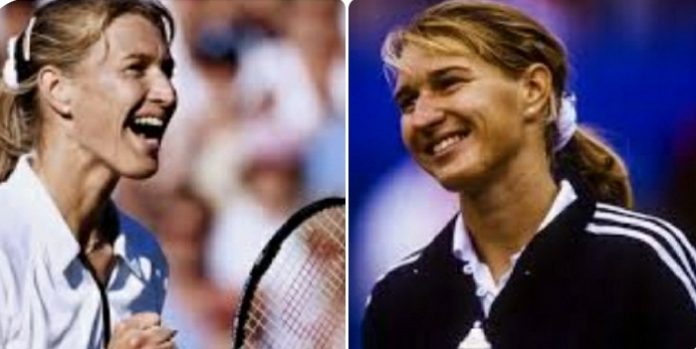 Steffi Graf was ranked world No. 1 for a record 377 weeks (more than 7 years) and won 22 Grand Slam singles titles, which ranks second since the introduction of the Open Era in 1968 and third all-time behind Margaret Court (24) and Serena Williams (23).

In 1988, she became the only tennis player to achieve the Golden Slam by winning all four Grand Slam singles titles and the Olympic gold medal in the same calendar year.

When she was nine years old, her family moved to the neighboring town of Brühl. She has a younger brother, Michael. Her father, an aspiring tennis coach, first introduced her to the game, teaching his three-year-old daughter how to swing a wooden racket in the family’s living room. She began practising on a court at the age of four and played in her first tournament at five. She soon began taking the top prize at junior tournaments with regularity, going on to win the European Championships 12s and 18s in 1982.

Steffi started dating Andre Agassi after the 1999 French Open and they married on 22 October 2001, with only their mothers as witnesses. They have two children: son Jaden Gil (born 2001) and daughter Jaz Elle (born 2003).  Agassi has said that he and Graf are not pushing their children toward becoming tennis players. The Graf-Agassi family resides in Summerlin, a community in the Las Vegas Valley. Graf’s mother and her brother also live there.