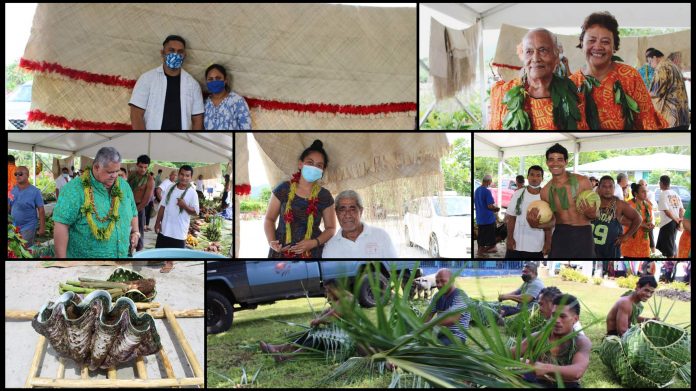 The theme of the Talomua and Market Day at Savaia, Lefaga was, Fa’amalolosi aua le Fa’avaivai – Stay Strong & Never Give Up. The village of Savaia, Lefaga hosted their Talomua and Market Day on Friday 18th March 2022. Members of the public around the southern part of Upolu gathered to witness the event and had the chance to purchase various agriculture and fisheries goods displayed, including giant clams from the village’s clam sanctuary.

“It was only cancelled in 2012 due to Cyclone Evan, and in 2019 due to the Measles Outbreak and then again last year due to COVID19”.

The Chiarman relayed their request for assistance from the government for the control of the wild pig population that continues to devastate their crops, and improvement with access roads to tue village’s inland farming lands.

The Minister of Agriculture and Fisheries, Honourable La’aulialemalietoa Leuatea Polataivao Fosi Schmidt, congratulated the committee and villagers for a well-prepared event, and encouraged them to stay strong and continue to celebrate their village Talomua initiative for years to come.

This is an indication of a long term commitment that will surely benefit the current and future generations of the Savaia community.

Honourable La’aulialemalietoa also remarked about the Ministry and Government’s initiatives and plans to increase food and nutrition security, import substitution and exports with the establishment of a national Export and Import Authority, for the long term benefit of Samoa’s smallholder farmers. He also mentioned that Cabinet has accepted the Ministry of Agriculture’s recommendation to replace the annual national agriculture and fisheries shows with traditional district Talomua events.

That way, districts have ownership and control of their Talomua, and all farmers within a district will have the opportunity to participate.

The Ministry’s role will be to provide technical and financial support and encourage exporters to attend the district events, where they can negotiate supply arrangements with farmers, and establish export markets.