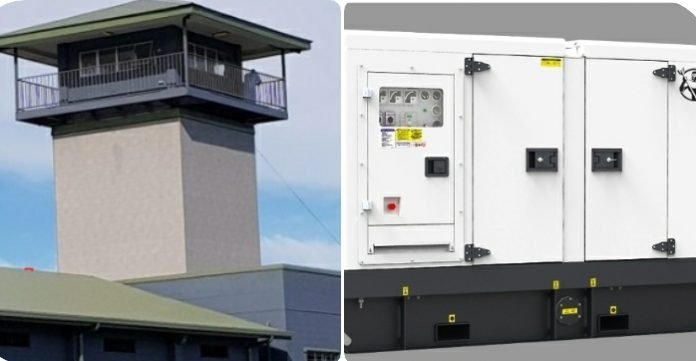 The procurement process for Tanumalala prison’s infamous standby generator is yet to be completed, now up again for tender with downgraded power of 110 kilo volt amps (kVa).

This was confirmed by the Chief Executive Officer of the Ministry of Finance Leasiosiofaasisina Oscar Malielegaoi, as well as the Commissioner of Police and Prisons, Su’a Fuiavailiili Egon Keil.

“The Ministry of Police and Prisons, have decided to re-tender the contract for the supply and installation of a standby generator”, said the CEO of Finance in an email.

“In addition, the generator has been downgraded to 110KVa, from the original 220KVA”, added Leasiosiofaasisina.

Commissioner Keil who was given the added responsibility of Samoa’s Prisons and Correctional Services in March 2020, confirmed that a 110kVa powered generator would be sufficient to service the whole of Tanumalala Prisons.

“We have decided to retender the process. So our staff has begun the protracted process a few weeks ago. We wish to get this work and other necessary initiatives for Prisons that require Tender Board consideration completed asap”, said Su’a Fuiavailiili.

When Samoa Global News had inquired in March 2020, the CEO of the Ministry of Finance who oversees the government’s Tenders Board, confirmed that two local and one overseas company had submitted bids when tenders had closed on the 10th of February 2020.

At the time, Leasiosio explained government’s procurement process being applied to the purchase of the Tanumalala prison standby generator.

He added that details of a winning tender can be made available after the Evaluation Committee’s assessment is considered by the Tenders Board, and Cabinet confirms the offer to the bidder that best meets compliance with technical specifications as well as cost.

The purchase of a standby generator for Tanumalala prison came under scrutiny when Member of Parliament for Gagaifomauga No. 3, Laauli Leuatea Polataivao Schmidt questioned the provision of $300k tala set out in government’s first supplementary budget for 2019/2020.

He had made his inquiries when the Supplementary Budget was presented to Parliament in December 2019.

In putting forward a position that the amount of $300k tala was extravagant for a 220KVA generator, Laauli who was also a former Speaker of Parliament, made the comparison to a personal purchase he told Parliament he had made.

Laauli then asked the Minister of Finance and the Chair of the Parliamentary Finance and Expenditure Committee to reconsider the amount.

In response the Chair of the Parliamentary Finance and Expenditure Committee Aliimalemanu Alofa Tuuau told Parliament back in December that the provisional amount was based on the least cost from three bids which had been sighted and properly checked.

Fast forward to 30 June 2020, and the Parliamentary Privileges and Ethics Committee found that Laauli had misled Parliament and recommended he be suspended from Parliament for three months. Widely publicised and shared on social media, Laauli then apologised to the House and said he was resigning from Parliament.

Fast forward also to this week, and the standby generator is once again, out for public tender with it’s downgraded specs of 110kVa.