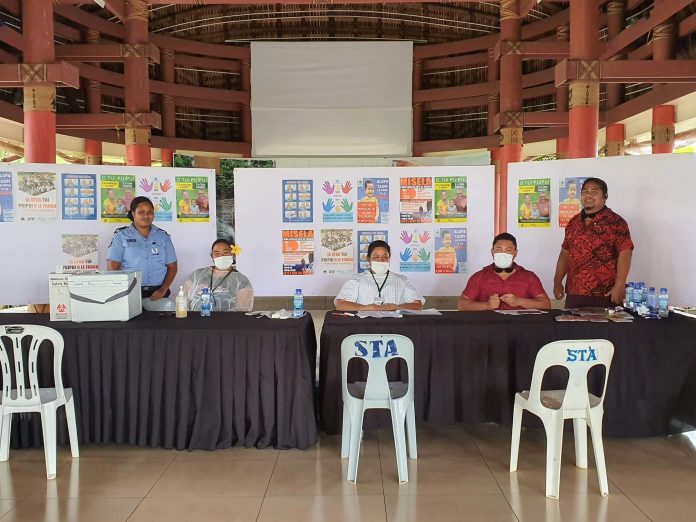 The Ministry of Health yesterday confirmed seven sites within the Apia Urban Area (AUA) for the Mass Vaccination Programme against Measles now mandated by Order following the State of Emergency proclamation in response to the measles outbreak which has so far claimed at least 17 lives, mostly children under the age of 5.

The seven sites were immediately activated yesterday and Samoa Global News was able to catch up with the team stationed at the Samoa Tourism Authority (STA) Fale as they came to the end of their first day.

The numbers are being monitored by Data Entry Officer Tomasi Sapau whose role on the team is to ensure records are kept updated and the information is well captured at the immunisation site.

The Transport Officer for ‘Team STA’ is Lasi Tofilau and yesterday, they were assigned police officer Koleta Sani.

“It is the first day and many people don’t yet know that there is a set up here,” said Sapau.

“Perhaps tomorrow, more people will be aware of the locations.”

RN Alofa reiterated that the Ministry is still prirotising children between 6 months and 19 years, and women aged 20 to 35 years at this stage of the campaign.

The writer, who has not yet received a booster shot tried to convince the Registered Nurse that she was within the age range.

RN Alofa Romeo was not the least bit convinced.

“You look older than 35,” she added with a warm smile that didn’t quite cushion the blow. 🙂

The strategic intervention is part of a Whole-of-Government effort to elevate the vaccination coverage for Samoa, reported to have the lowest coverage in the Pacific.

The public notice confirms that there are mobile teams to cater for those who cannot access the fixed sites.

“The public will be informed as more sites are activated”

All enquiries should be directed to the National Emergency Operation Center (NEOC) on the free calling telephone number 997.

Tip: If you come to the STA Fale, there is car parking available across the road in the Catholic Church carpark.