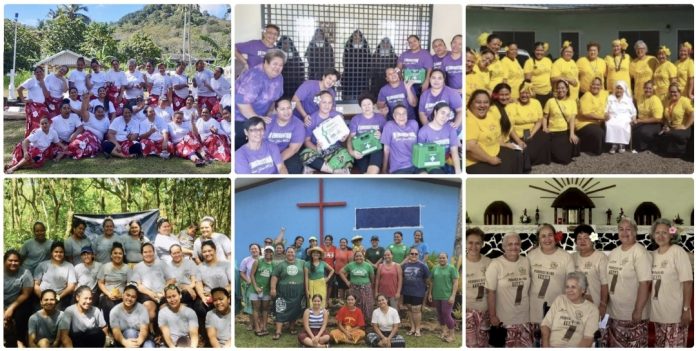 The St Mary’s Old Girls Association (SMOGA) in celebrating 65 years since the establishment of the St Mary’s College, allocated former students into 10 teams, to each conduct a community service activity, in line with the spirit of service and selflessness at the heart of the SMSM Sisters (Missionary Sisters of the Society of Mary) who established the school in 1956.

The 10 teams of SMOGA former students chose 10 charitable activities that would give a helping hand and do good in the community, as part of their month-long celebrations.

Many not-for-profit and non-governmental organisations that help to fill various gaps in community work and social services in Samoa, were blessed by the SMOGA initiative.

To ensure there is a mixture of generations in each team, the 10 teams are grouped together by the last number of your entrance year to the school. To honor the school’s former principals, each team is named after the first ten Sister principals who led the school in its early years of establishment.

Here’s a brief look at the various community projects by the 10 teams. Many of the projects were carried out over this past weekend, with a few more to be implemented in the coming week.

Team 1: Sr Emerentiana. The Purple team visited the Sisters of the Carmelite Monastery in Vailima for early morning mass. They carried out a full clean-up of the compound and presented first aid kits that were specifically requested by the Carmelite Sisters.

Team 3: Sr Aquin – The Orange team visited the children at the Samoa Victim Support Group (SVSG). They took car loads of gifts including food, clothing, other essential supplies and books for the children survivors of domestic and sexual violence. They also set up a movie night for the resident children and teenagers of SVSG. They took along some pop corn and spent the evening in fellowship with the children. Members of Aquin said it was eye-opening for many who had visited SVSG for the first time and shared how they were touched by the positive attitudes of the children survivors despite their circumstances. 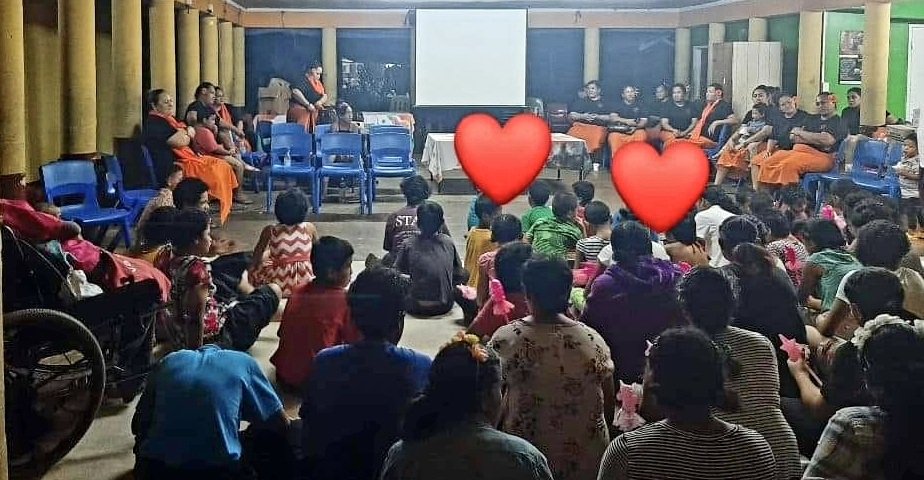 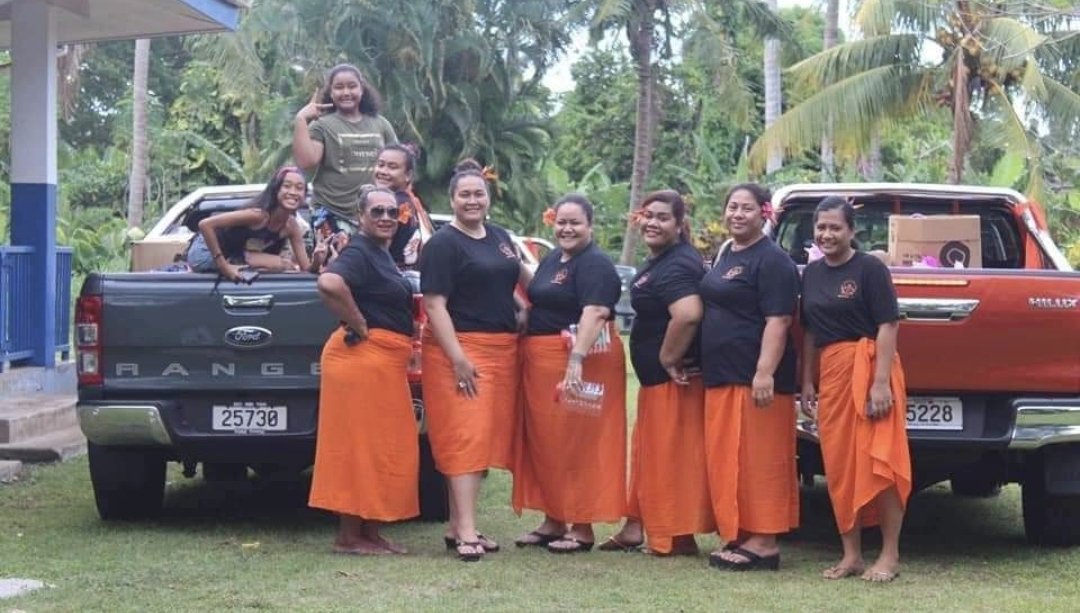 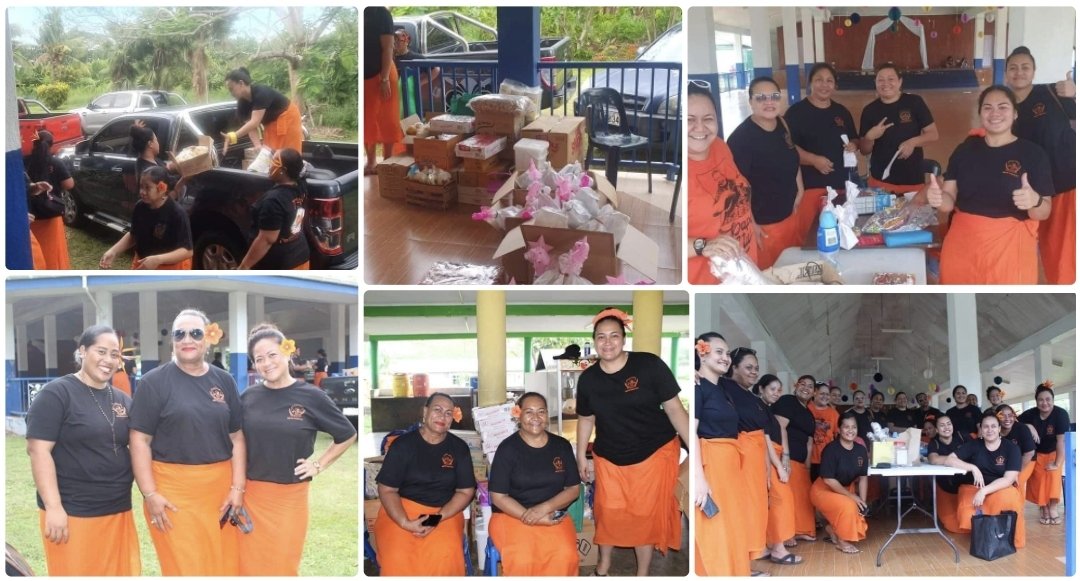 Team 4. Sr Emanuela Betham – The Silver team carried out their tree planting project in partnership with MNRE at the Tuanaimato reserve to raise awareness of the impacts of climate change. The Silverines planted 200 tree saplings through this project for sustainable forest management. They hope to be a positive influence on future generations to take a stance against climate change. 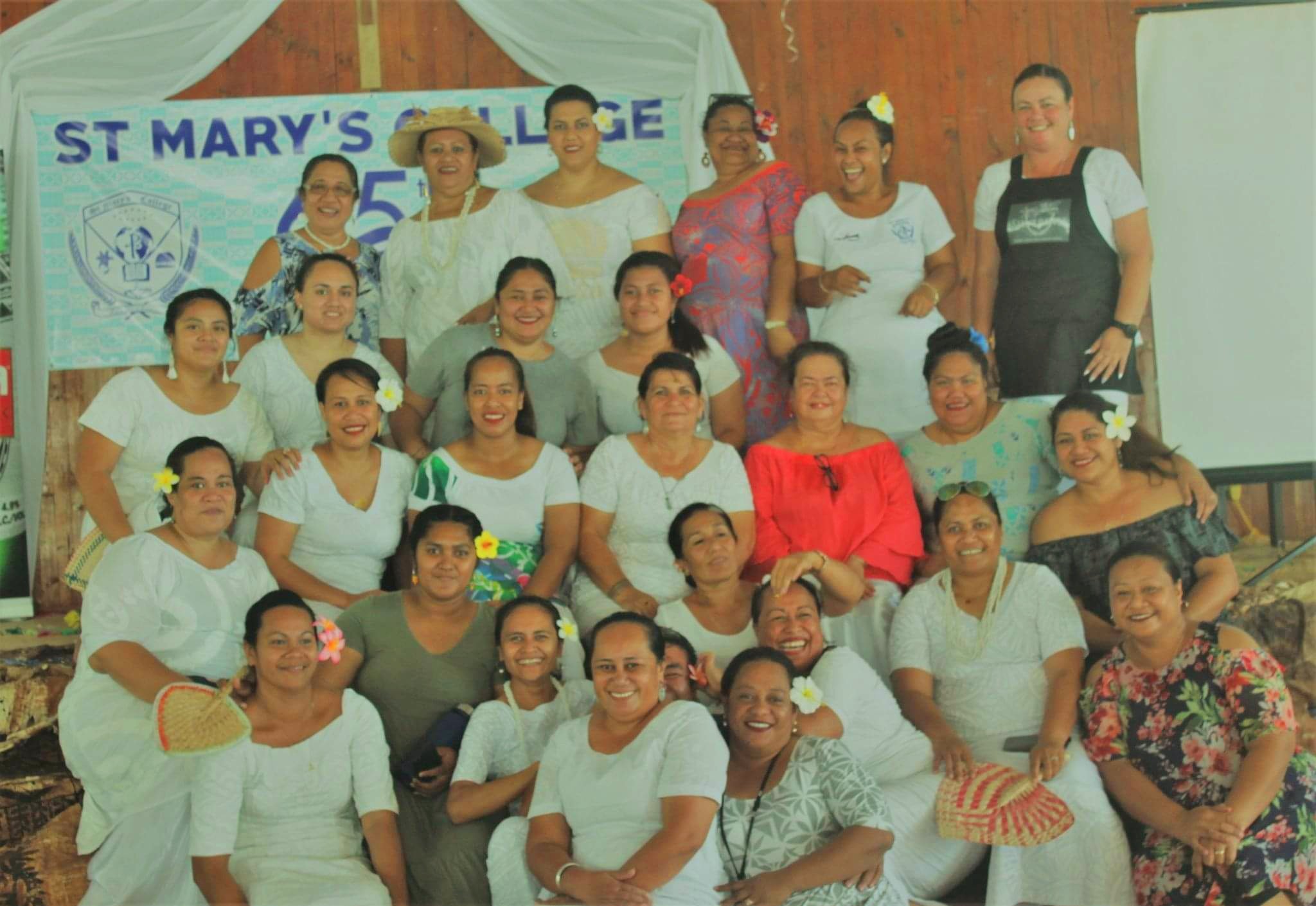 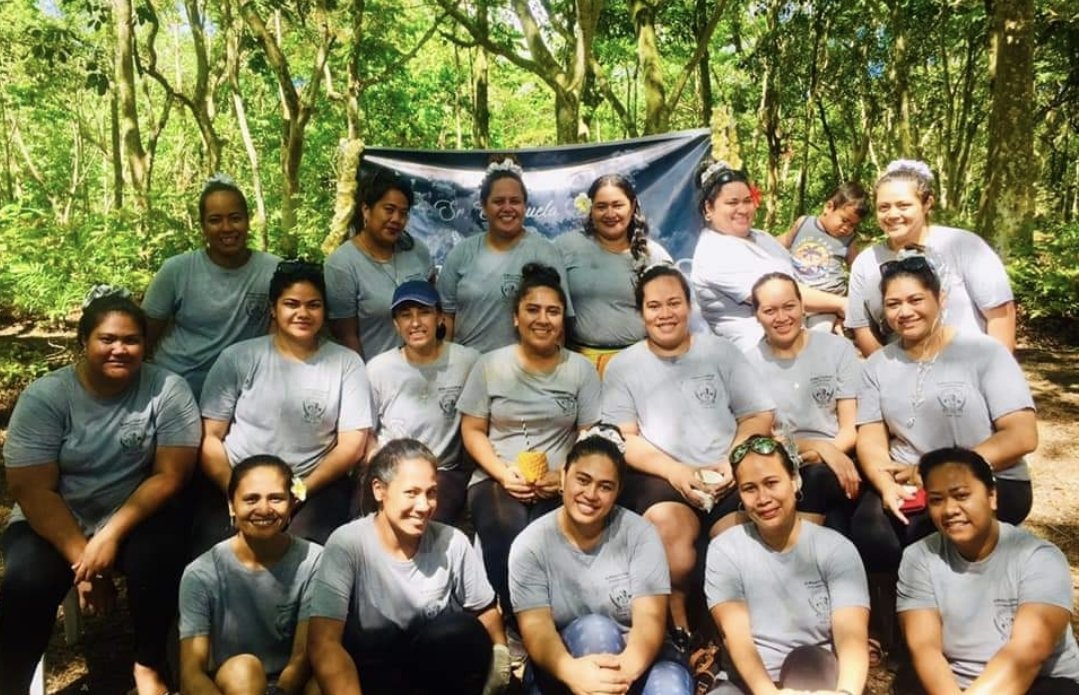 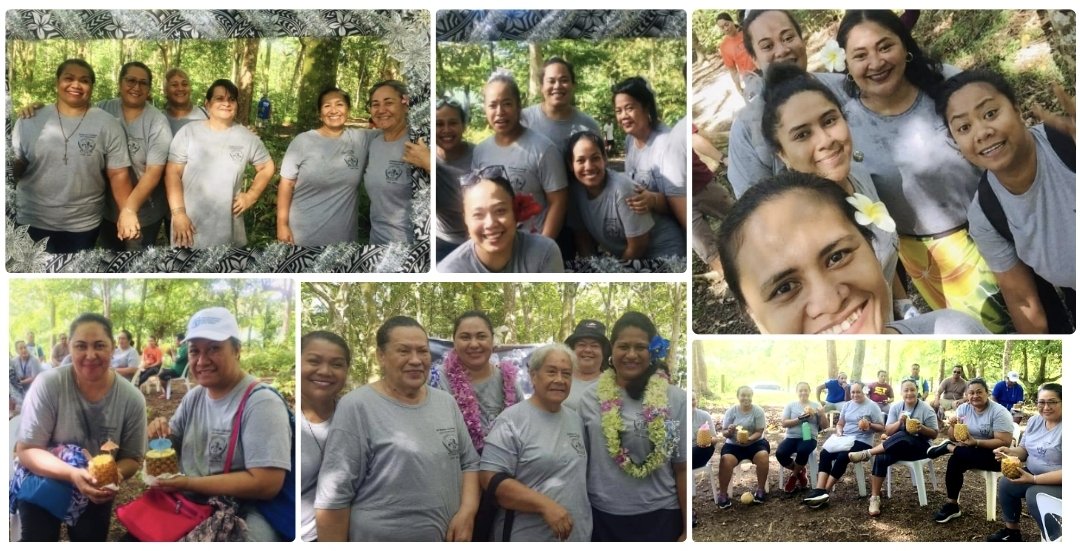 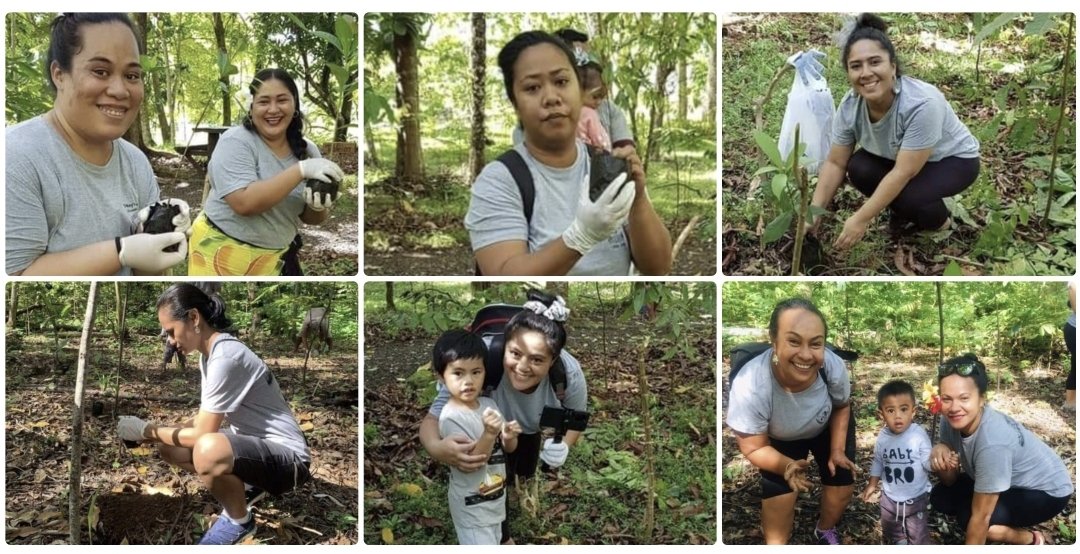 Team 5. Sr Mary De Paul – The Green team focused on the school compound at Vaimoso. The ladies are seen waterblasting and then painting the St Mary’s College administration block. The team spent an entire day from 7am to 5pm cleaning the school grounds. The Green Team also provided a brand new bed for the school’s sick bay area. 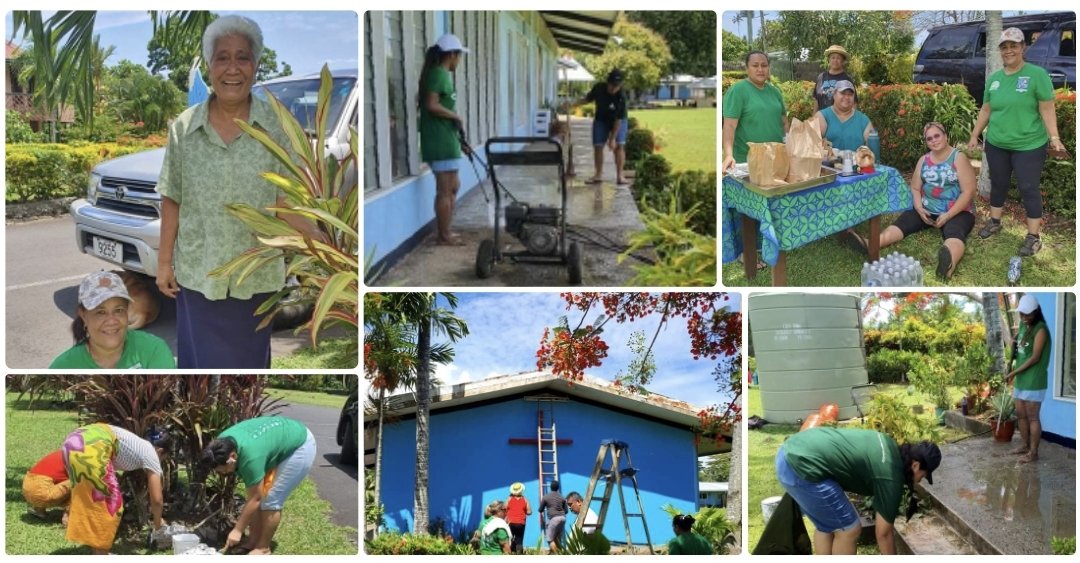 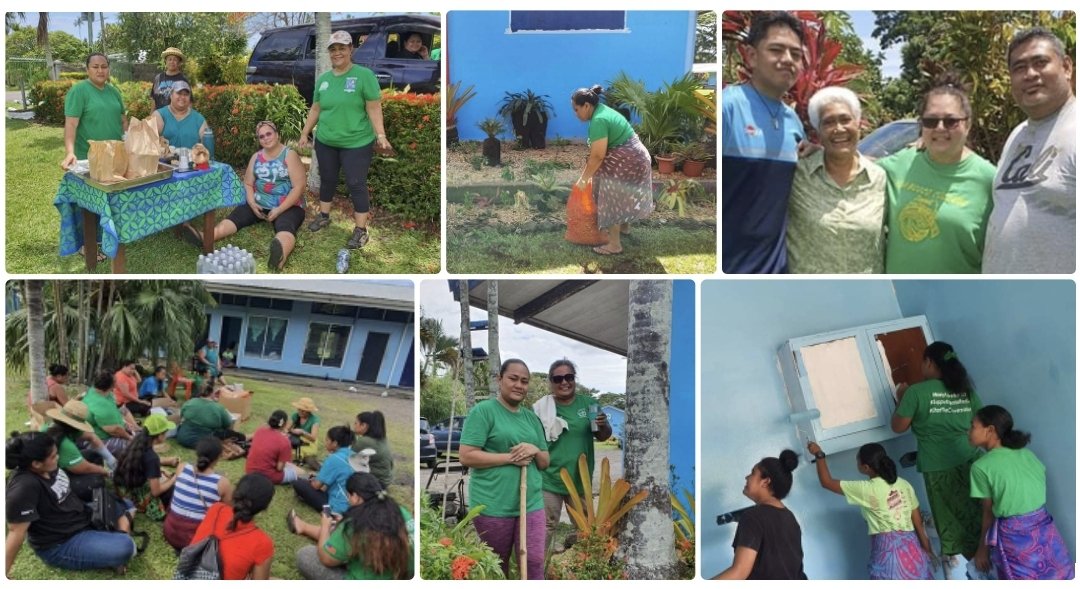 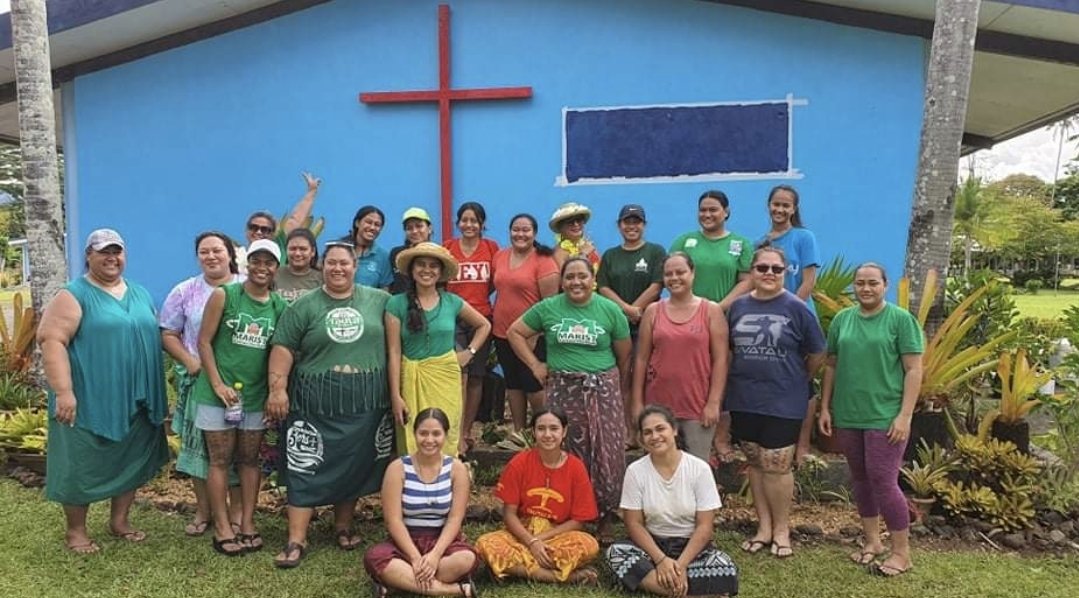 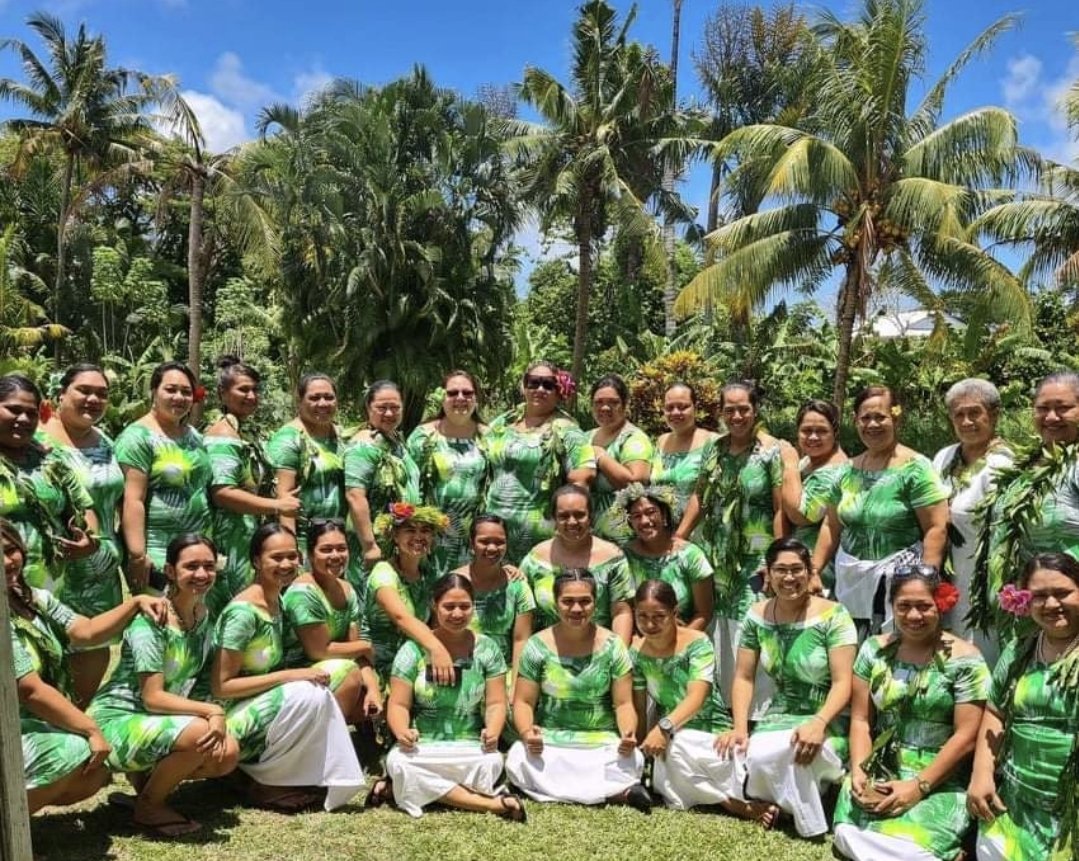 Team 6. Sr Vitolia Mo’a – The Red team will visit the women’s correctional facilities at Tuanaimato and bless the inmates with fellowship and gifts. 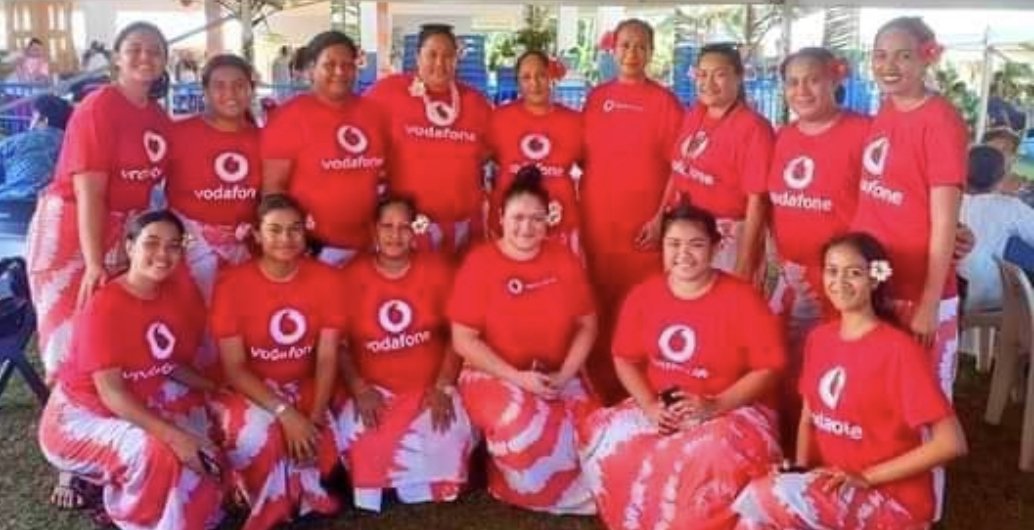 Team 7. Sr Rose McAloon – The Brown team visited the Home of the Elderly at Mapuifagalele and the Little Sisters of the Poor.  The ladies attended mass, and then spent the day cleaning up the compound. They took baskets of food and necessities, and then stayed on to fellowship and entertain the elderly. 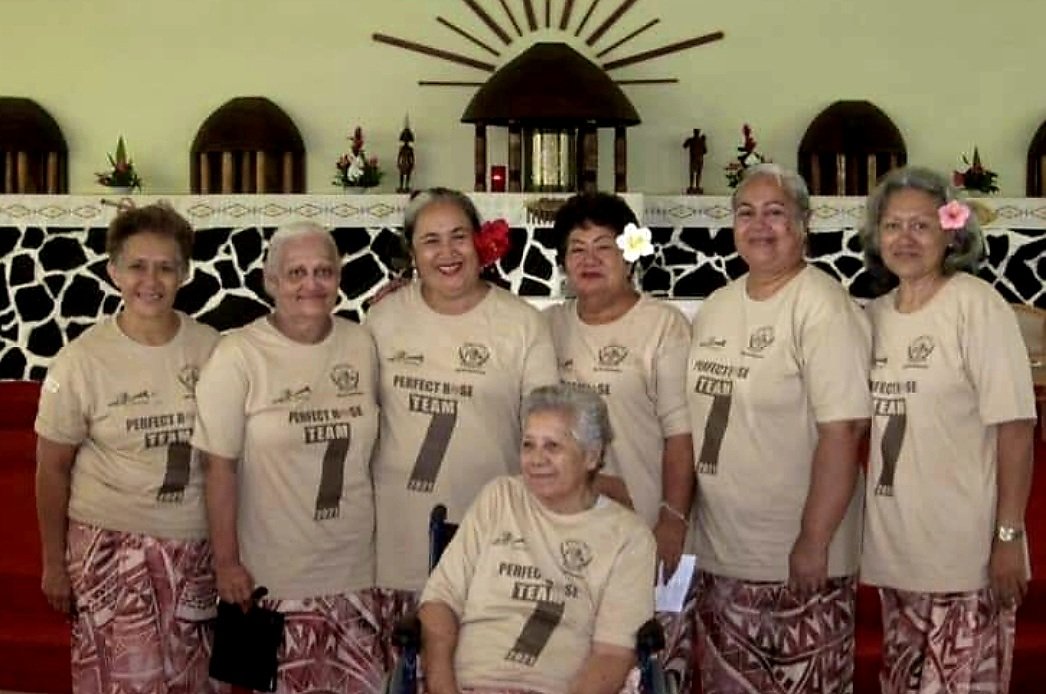 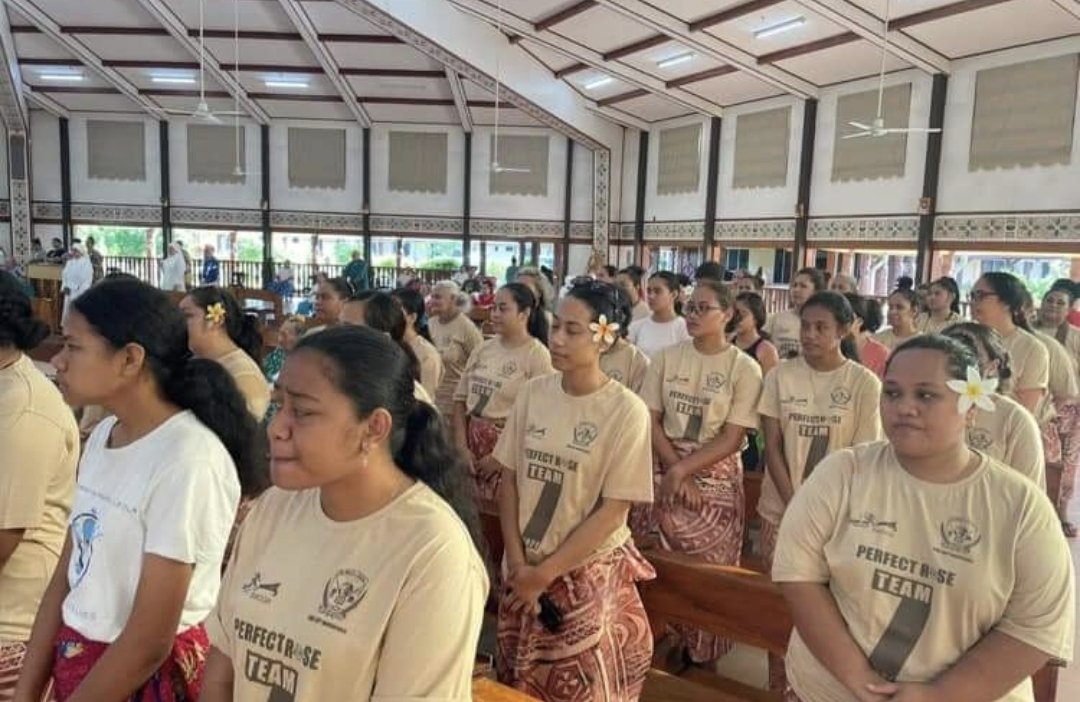 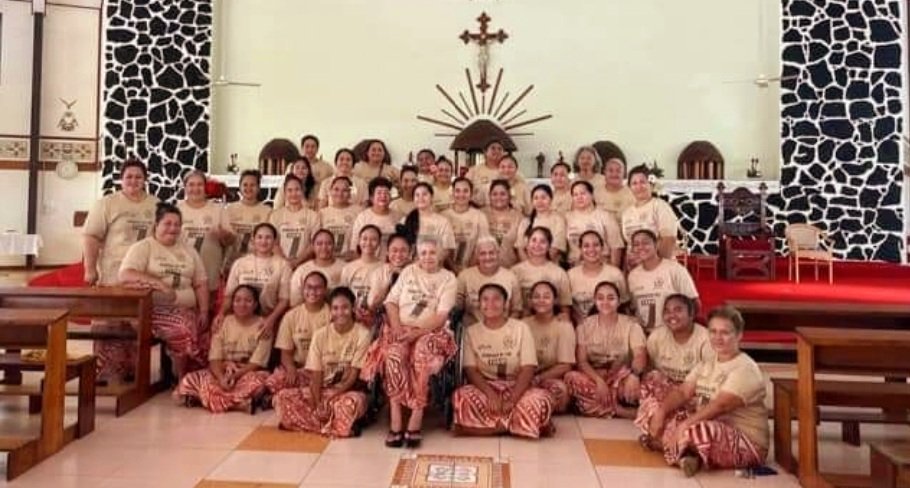 Team 8. Sr Losalia Mulipola – The Yellow team visited the Missionary Sisters of the Society of Mary (SMSM) based at Vailoa. They took supplies of food and homeware and shared morning tea with the Sisters. Team Yellow also donated and installed a new air conditioning unit for SMSM. 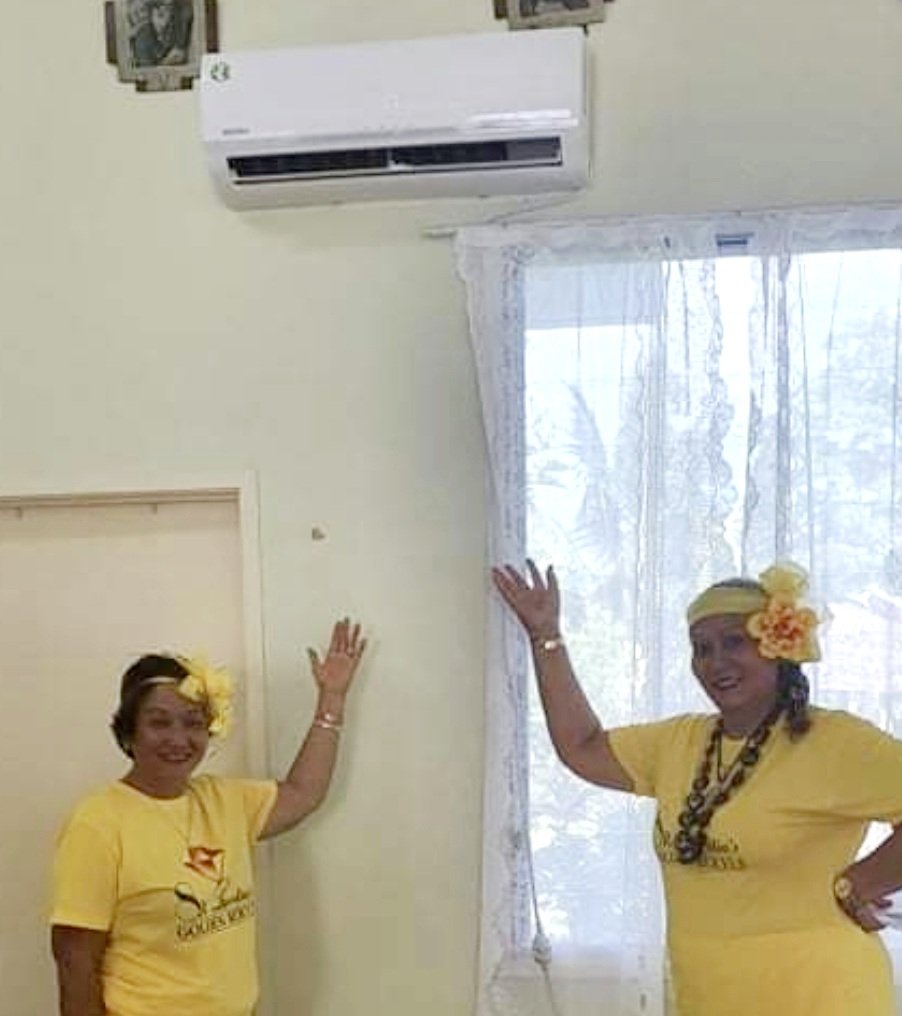 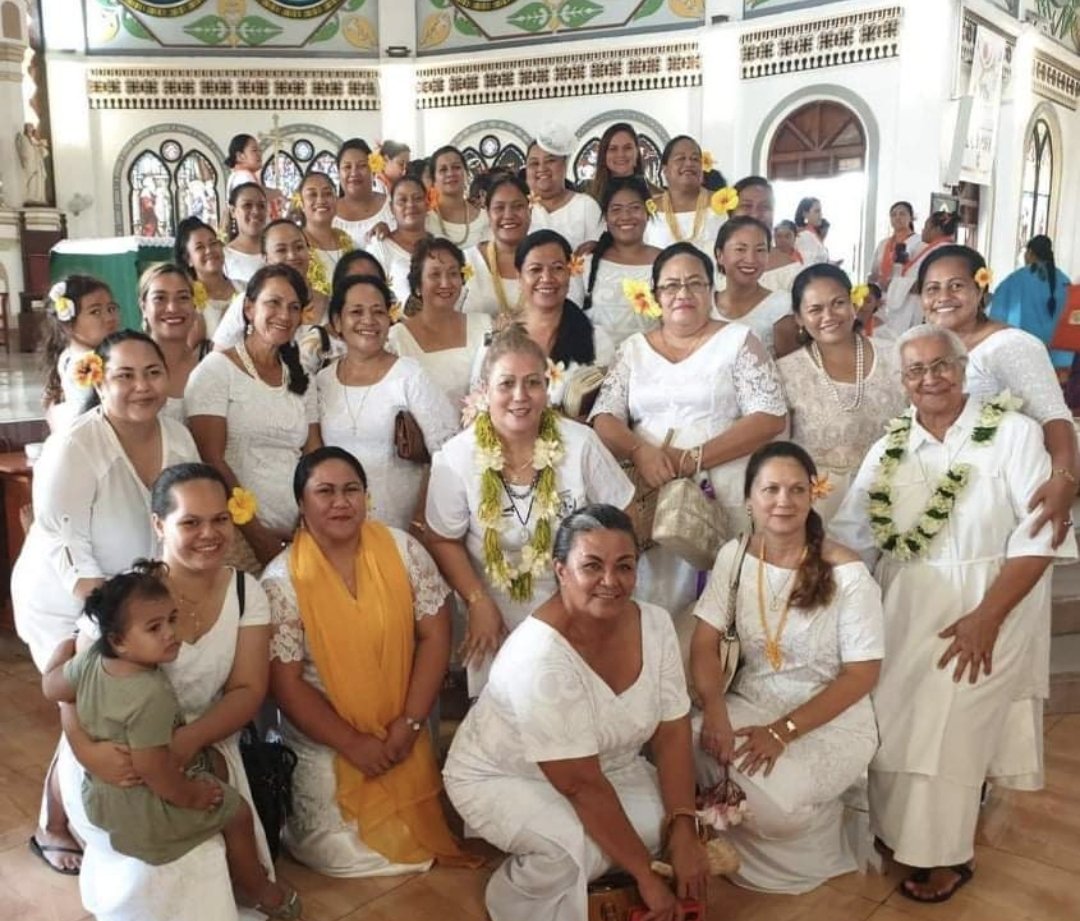 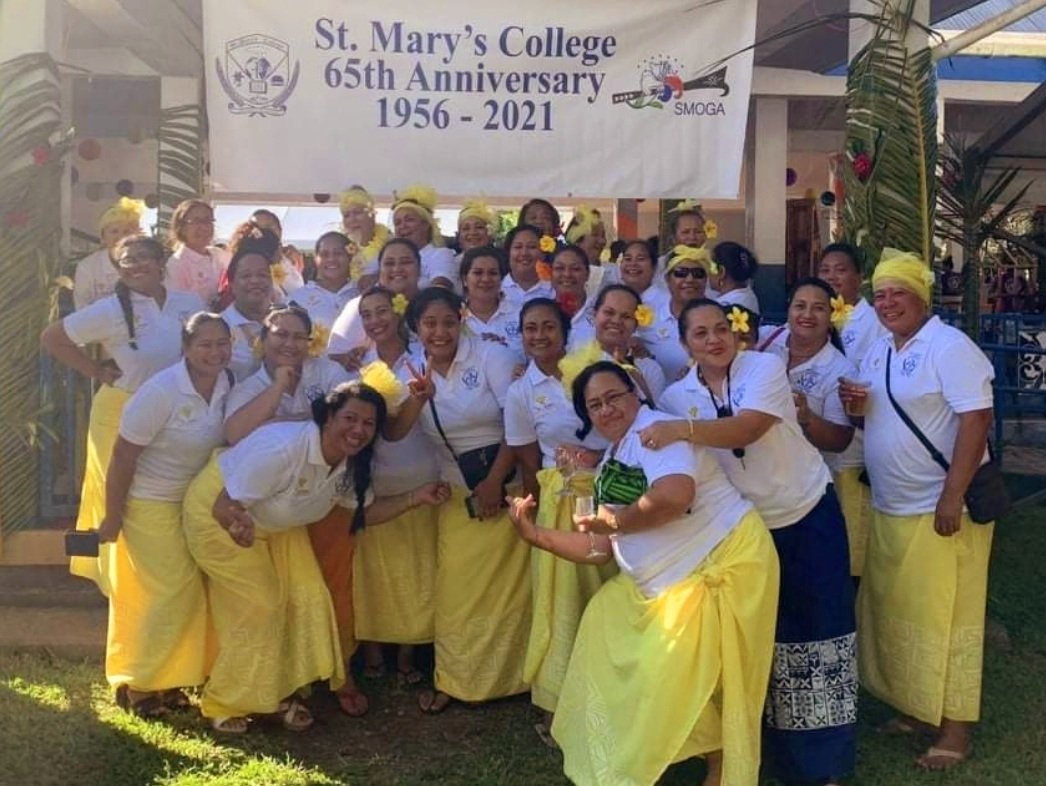 Team 9. Sr Pelenatete Peni – The Maroon team spent their Saturday cleaning up the Moamoa Catholic Cemetery as part of their community project. The ladies painted the graves and carried out a full clean-up of the cemetery grounds, mowing the lawns and clearing rubbish. It was all-hands-on-deck to ensure the grave sites were cleaned and all of them painted white. Many of the early church missionaries were laid to rest there. 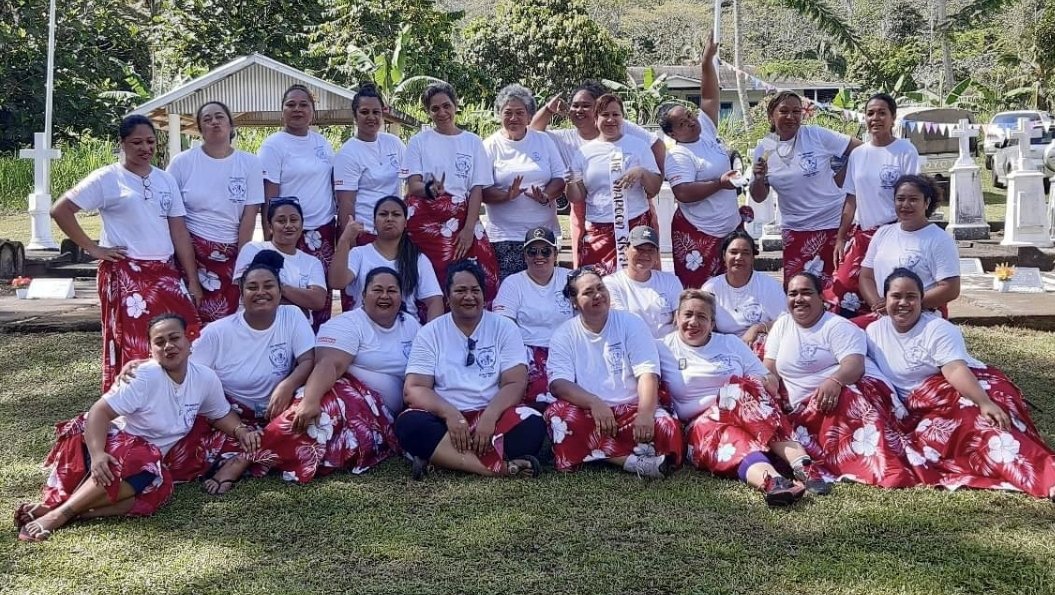 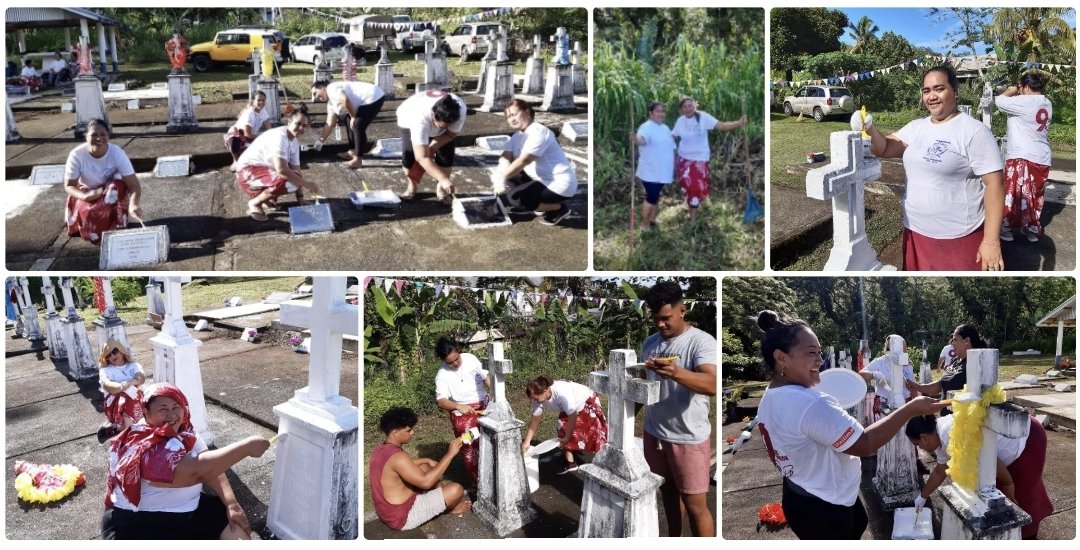 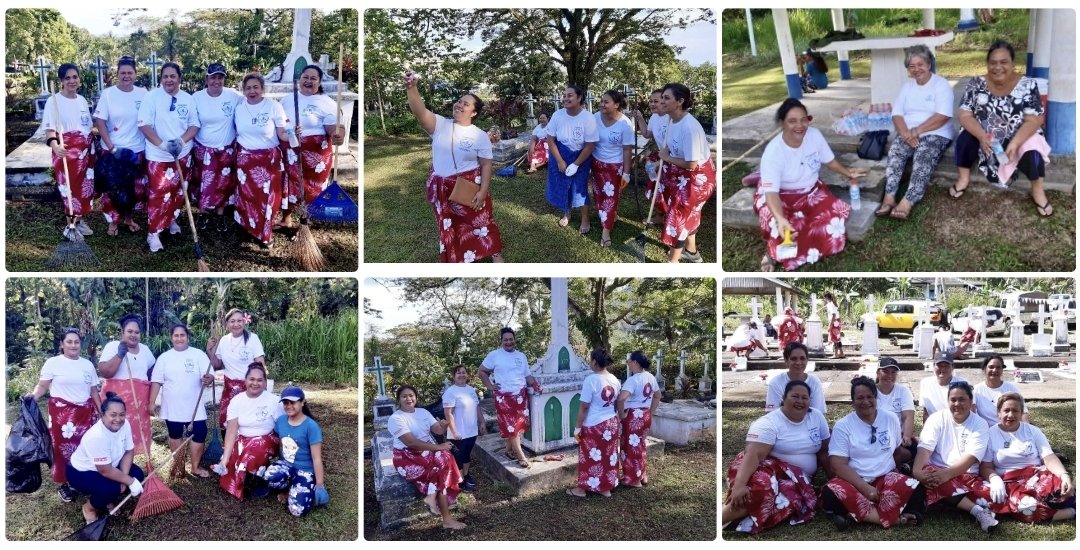 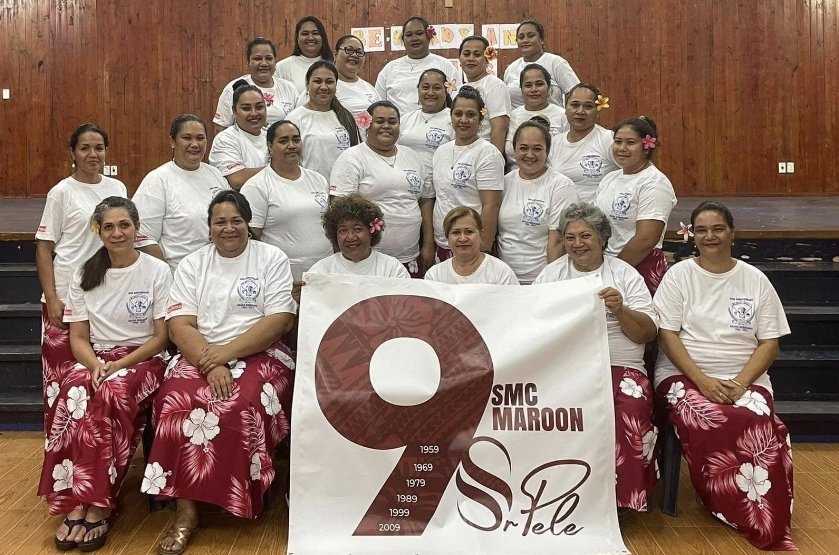 Team 10. Sr Makelita Meni – The Blue team have chosen the Lotu Taumafai school for children with disabilities. This activity will be carried out in the coming week. 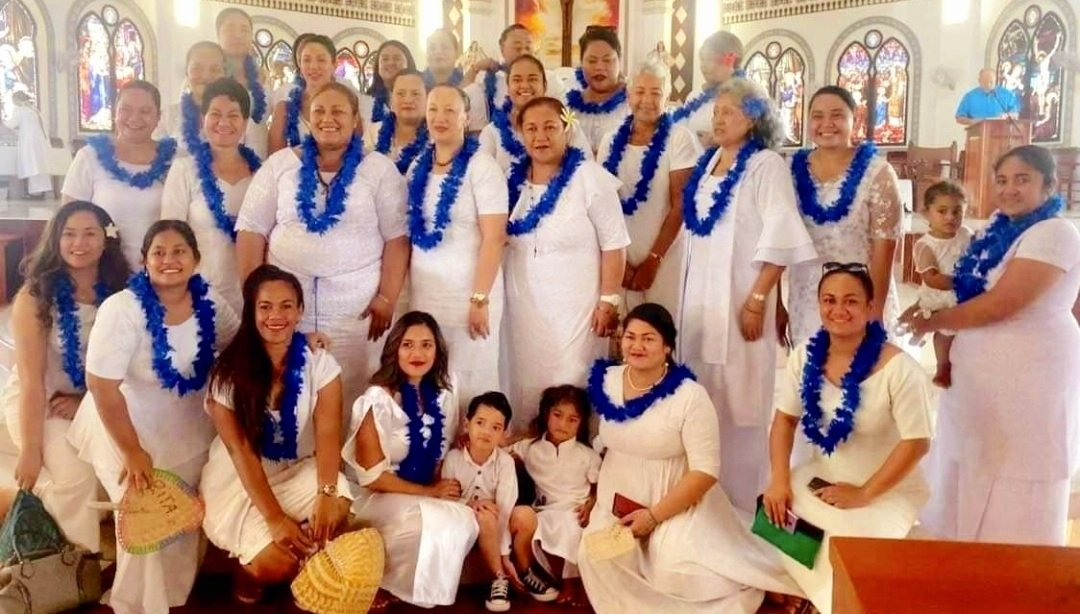 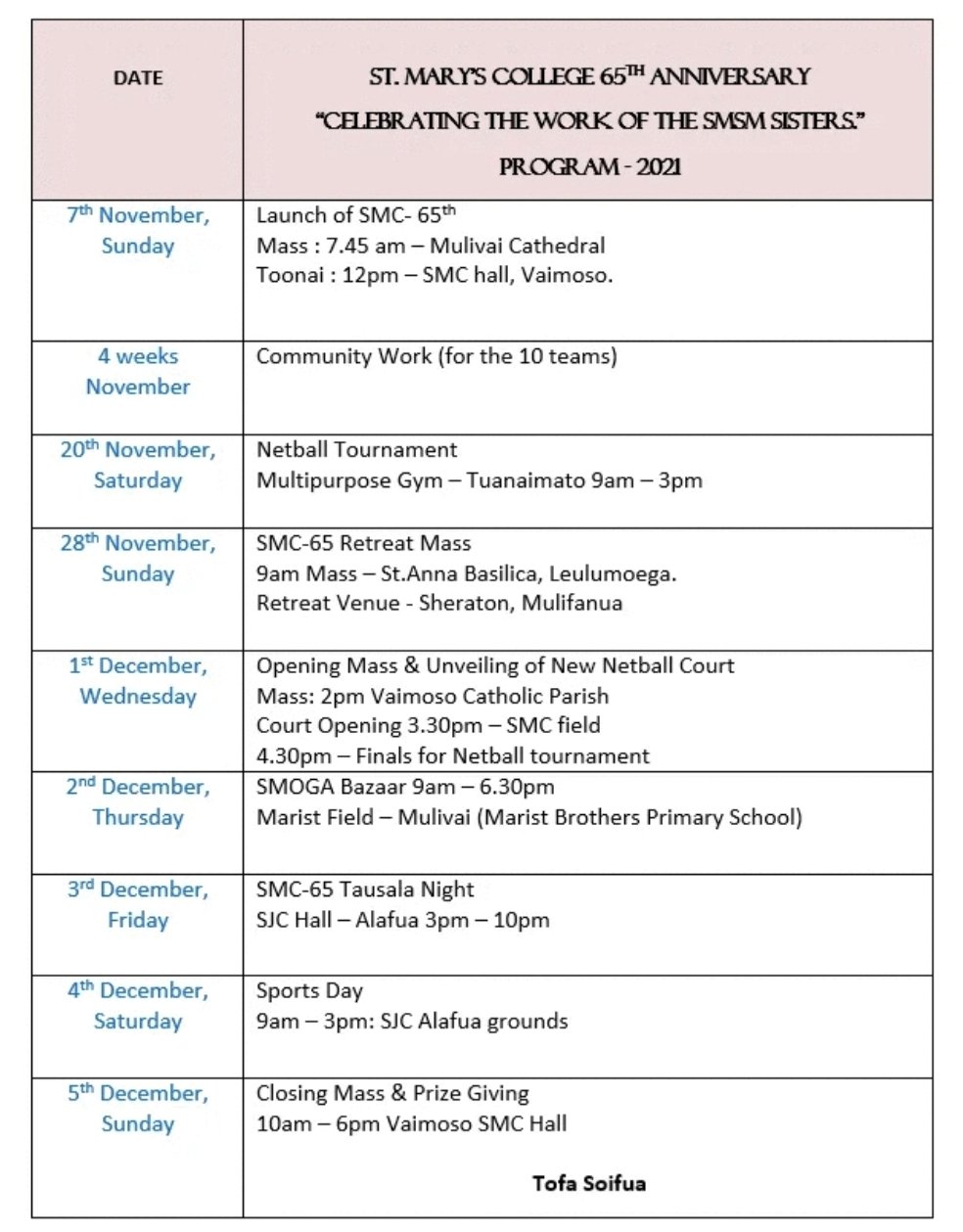 The St Mary’s College celebrations launched last Sunday with a mass and toanai. The month-long celebrations will end with a weekend of tausala night, sports day and final prize giving and mass.