21 December 2020, Vailele Apia Samoa. Roads at Vailele were blocked this morning when members of the SSIG or Samoa Solidarity International Group took to a peaceful march against the LTC Bills to the residence of Samoa’s Head of State Afioga Tuimalealiifano Vaaletoa Sualauvi II Tuimalealiifano this morning.

Police Commissioner Su’a Fuiavailiili Egon Keil said police guarding the residence of the Head of State did not allow the group through. 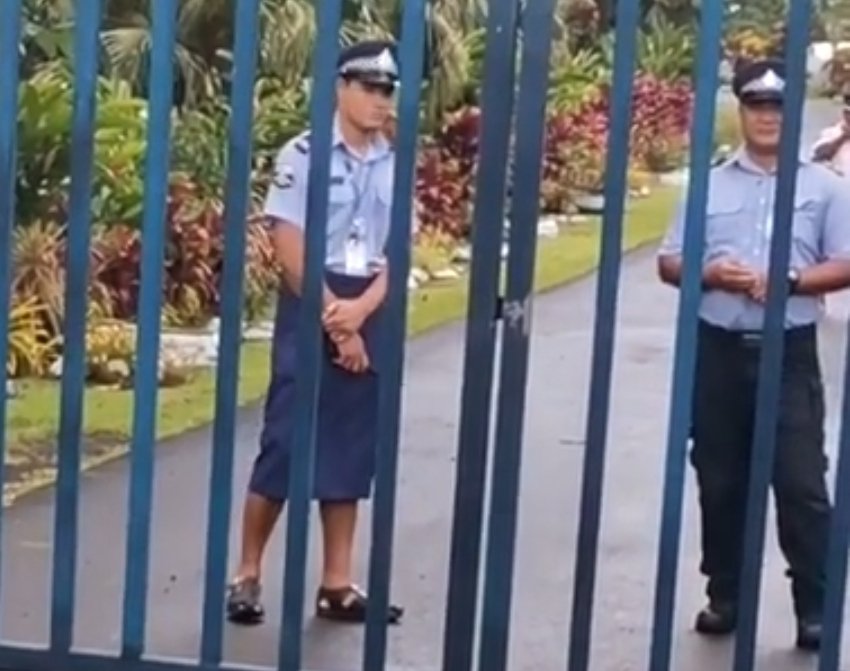 “We made contact with the group with a determination for peace…

“The police did not issue a permit for a march and we were not given any notice from the group. For safety and privacy reasons, entry into this specially designated premise was denied to the group”.

Seen by tens of thousands on Facebook live feeds, SSIG founder and human rights activist Unasa Iuni Sapolu said the three LTC Bills recently passed by Parliament by a 41-4 majority vote removes the rights of individuals to take grievances to the Supreme Court.

More than 50 members of SSIG were seen marching along the road at Vailele including children, holding protest messages.

The SSIG say their last resort to stop the controversial LTC Bills from becoming Law was to ask the Head of State, himself a lawyer, to reconsider and not sign off on the newly passed Laws, that the group insists, removes rights to customary land ownership.

The Samoa Judiciary, the Samoa Law Society, as well as the Office of the Ombudsman had all raised concerns over the past several months. A Parliamentary Select Committee took to villages across Samoa in public consultations of the bills which even led to the resignation of Samoa’s Deputy Prime Minister Hon Fiame Naomi Mataafa in September.

Outside the gates of the Head of State this morning Unasa spoke on behalf of the group..calling on Samoans to stand up for their rights and protect customary lands for the sake of its children.

“Remember that there is a country for Samoa not SaChina…

“Because if you don’t stand up for your rights, noone will…the Palemene o Samoa will not..

“They stand up for the rights of the rich and those who use the foreign money to develop businesses..

“Thank you and thank you for the live”, said Unasa.

Unasa said a written message from the President of SSIG was then handed to “Police Inspector Darth” to be delivered to the Head of State when their group were unable to enter the gates.

The written message reads: “Before you sign the Bills into Law that removes our rights, please have a look at section 109 of the Constitution and if there was a national referendum to seek the opinion of the people, who own the Lands”.

“We took the children because they are the ones that will be affected,” SSIG say on a live Facebook feed.

Unasa Iuni Sapolu told Samoa Global News that SSIG has done all it can. “They tried their best”.

During his Parliamentary address before the third reading the LTC Bills, Hon Faaolesa Katopau Ainuu allayed concerns raised on the impacts of the new laws.

In terms of protection of customary lands, Faaolesa said there is no proof nor any reference in the Laws to support claims that the amendments would result in changes to communal land ownership.

“That assumption is not factual and it is based on predictions”.

To address the multiple concerns from the Judiciary and Samoa Law Society, the Minister said the Government had established an Independent Legal Panel to ensure these concerns were incorporated into the final amendments.

He said members included a former Attorney General, a Former President of the Samoa Law Society, a former Chief Executive with the Samoa Land Reform Commissioner and a former Director of the Legal Division Commonwealth Secretariat.

“The panel’s findings are included in the amendments and had also addressed the concerns raised”.

The Samoa Solidarity International Group, however, have been strong opposers of the LTRA 2008 since it was first introduced, and they insist the Laws, “will take away our Customary Lands”.