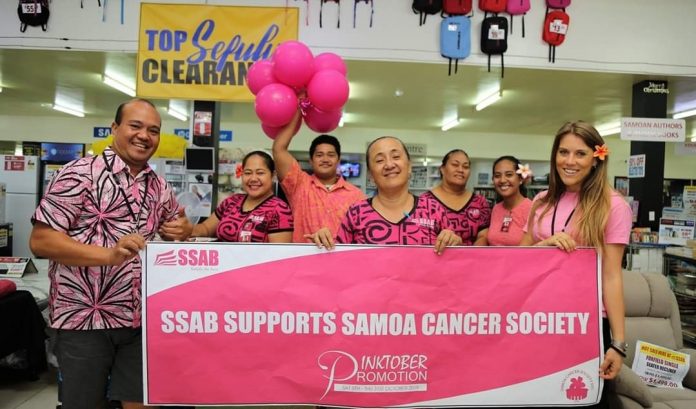 This is the sixth year in a row that SSAB has supported the awareness work of SCS, by donating a portion of sales from certain products.

This year it was the sale of A4 paper where $5 tala of every rim sold would go towards the work of the Samoa Cancer Society.

Asomua said that 142 were sold within the timeframe of the promotion. SSAB then added a further 5% from every pink product sold, together with an additional donation, to make up the total of $1000 tala.

“Many companies had enough supply of paper, but they bought more because they wanted to help the cause,” said Asomua.

CEO of Samoa Cancer Society Shelley Burich received the donation and expressed the society’s sincere gratittude to SSAB for their ongoing help and support.

Burich said the value of their partnership with SSAB is more than the monetary donation, but it is the way SSAB promotes cancer awareness within the stores, amongst the staff and with its customers.

Each year Samoa Stationery and Books staff from all its branches get behind the spirit of the Cancer Society awareness campaigns.