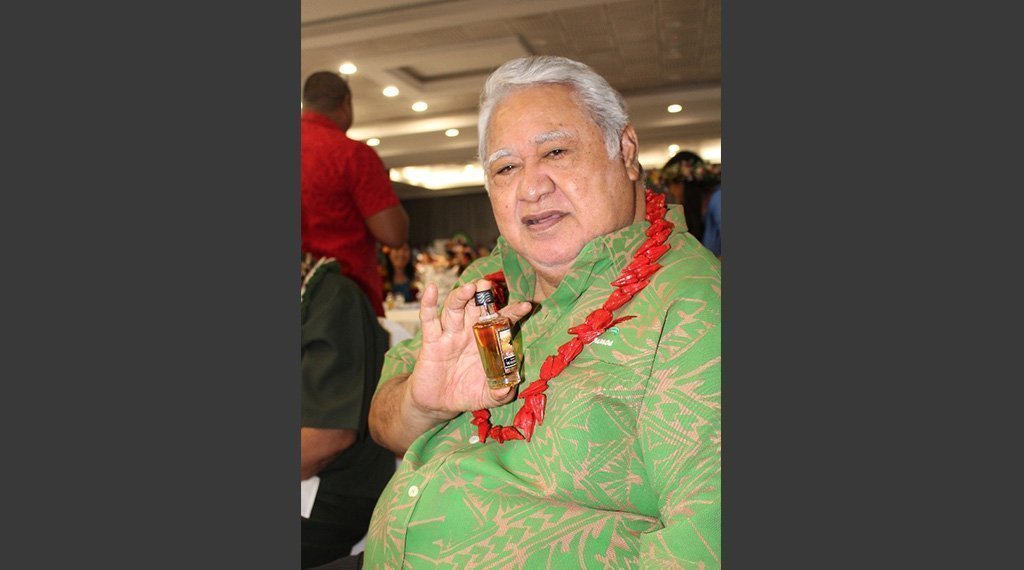 GOVT. PRESS SECRETARIAT); Prime Minister Tuilaepa Lupesoliai Dr. Sailele Malielegaoi is not a whiskey drinker. But he is infatuated with the Samoa Whiskey, the latest export commodity successfully developed by the Scientific Research Organisation of Samoa, (SROS) and launched last Friday evening at the Taumesina Hotel.

Samoa Whiskey in the Prime Minister’s perspective translates to new income for farmers and growers of agricultural crops, assist with the country’s Foreign Reserves and, ross Domestic Products, new jobs for Samoan Scientists and most importantly, a testament to Samoa’s scientific ingenuity.

Samoa Whiskey is now available at selected local stores and at the international duty free shops. But that is just the tip of the iceberg, as SROS Chief Executive Seuseu Dr. Joseph Tauati and staff have also developed the Samoa rum using sugar cane as the main ingredient and the Samoa Gin with the Polynesian Plum (Vi) as the main ingredient soon to make their respective debuts. The target is to retain a foothold in the international duty free niche market to build up the Made in Samoa liquor’s marketing value and volume for future investors to pursue should they wish to merge into a partnership with SROS.

And to protect Samoa’s interest, the Prime Minister in his congratulatory speech called on SROS to legally protect their technologies as other countries have no respect for patterns and even international copy rights laws.

The Prime Minister noted that this is nothing new as it has happened before with the Samoa coconut milk, pe’epe’e. 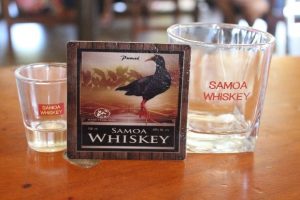 “In the early 1970s, Samoa developed the write formula for canned coconut milk. But government at the time failed to patent his research and formula. Today, the same formula has been replicated by coconut milk companies in China, Thailand, Indonesia and the Philippines – at a much cheaper price – forcing our local coconut milk producers out of the market,” he recalled.

“The same is bound to happen with our Samoa Whiskey as other countries also can grow taro and other agricultural crops,” he added. “And to assist, there is new legislation to this effect to protect our food technologies pattern now before Parliament.”

For Samoa to retain a foothold in the export market of secondary products, the Prime Minister is daring the business sector to partner with SROS.

“Government has done its part – through SROS – by developing these products. We now need private businesses to come in and commercialize the flour, the oil, the subsequent butter and margarine from local crop staples we’re launching this evening.”  These products should, according to the Prime Minister, must find their ways into the markets found in overseas countries like New Zealand and Australia.

“Government has not been blinded by the strict overseas quarantine regulations and S.R.O.S. is our answer.”

And he is also mindful of the need to avoid the very rigid quarantine laws of overseas countries established to protect their economy from diseases and pests that are often brought in through the importation of primary products with secondary products available as an option to infiltrate overseas export markets.

To that end, the Prime Minister said that SROS is also providing jobs for Samoan scientists who have graduated from overseas and use their expertise for Samoa. As for the Samoa Whiskey, Tuilaepa says that the catch phrase should be; “Can I have Some More (Samoa) whiskey? That’s a very catchy phrase don’t you think? And who knows, the possibilities for more liquor such as Samoan Rum and Samoa Gin using our own agricultural produce as main ingredients are endless.”
At the end of the day, the Prime Minister says that the farmers who will be supplying the raw materials will be the biggest benefactors of Government’s drive through SROS to boost the volume of secondary exports.