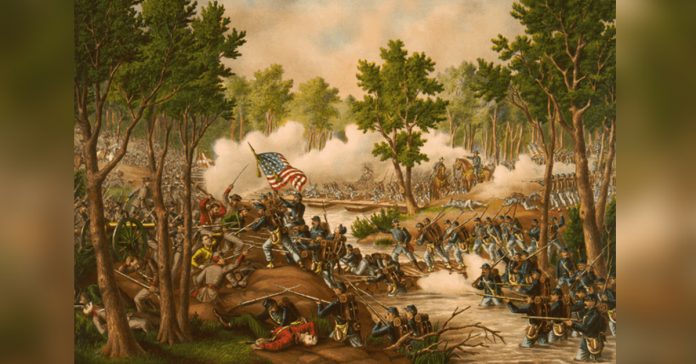 In May 1864, Confederate forces clashed with the advancing Union Army in the Battle of Spotsylvania Court House, which lasted for the better part of two weeks and included some of the bloodiest fighting of the Civil War. After an indecisive battle in the dense Virginia woods known as the Wilderness ended on May 7, Union General Ulysses S. Grant and the Army of the Potomac marched southward, meeting Robert E. Lee’s Army of Northern Virginia once again at the crossroads town of Spotsylvania Court House the next day. Over the 12 days that followed, Union troops briefly broke the Confederate line, but the rebels managed to close the gap and hold their ground. The battle, which cost 18,000 Union and 11,000 Confederate casualties, included nearly 20 hours of brutal hand-to-hand combat at the infamous “Bloody Angle,” a section of the Confederate salient, on May 12-13. On May 21, Grant disengaged his troops and ordered them to continue their march south toward the Confederate capital of Richmond.