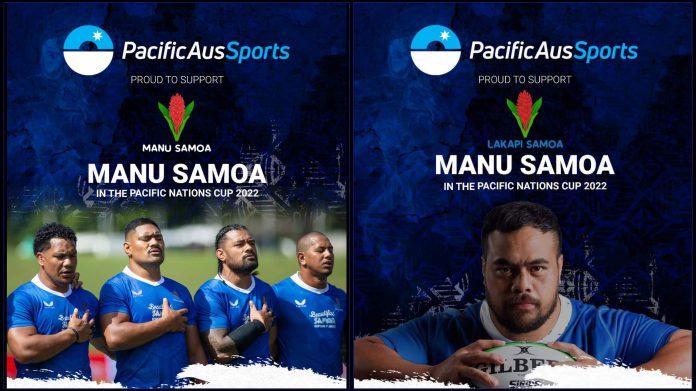 Apia, Samoa 14 July 2022 If there is one thing Australia and Samoa have in common, it is their passion for sports and with rugby being Samoa’s national sport, Australia is stepping up to assist the Manu Samoa elite teams.

Last month PacificAusSports and Lakapi Samoa entered into a sponsorship agreement to support the Manu Samoa 15s participation in the Pacific Nations Cup currently being held in Fiji.

Australia’s High Commissioner to Samoa, Ms Emily Luck says sports has the power to bring communities together and Australia, through its PacificAusSports Program, is proud to support Lakapi Samoa in providing pathways for local athletes to compete at the elite level.

“We have a healthy rivalry on the sports field, but our close friendship and love of sports runs deep. We share a belief that sports is and should be for everyone,” said Her Excellency Emily Luck, Australia’s High Commissioner to Samoa.

With two wins from two matches at this year’s Pacific Nations Cup being held in Fiji, there is much excitement around Manu Samoa’s final match this weekend.

So far undefeated, Manu Samoa will come up against hosts Fiji. A win against the Flying Fijians this Saturday will see the Manu being crowned Pacific Nations Champions for 2022.

Chief Executive Officer of Lakapi Samoa, Faleomavaega Vincent Fepulea’i says the mother union is grateful to the Australian Government and PacificAusSports for their commitment.

“We greatly welcome the support of the Australian Government behind the fixtures through its PacificAusSports program,” said Faleomavaega.

“Australia and Samoa share a strong cordial relationship in political and socio-economic development, and in the rugby arena too. We are proud of the achievement our sports men and women are contributing in Australia and in the world of sports.”

The Regional PacificAus Sports Hub based in Samoa will further help foster new generations of sports talent across the Pacific region. It works to develop elite sports pathways not just in rugby, but for other Pacific teams and athletes to compete in the Pacific, Australia and internationally.

The Hub will increase Australia’s sports engagement in the Pacific and help unlock the potential of a new generation of sporting champions.

Faleomavaega is excited about PacificAusSports having its Sports Hub in Apia.

“We acknowledge and thank PacificAusSports for agreeing to sponsor the Manu Samoa in the Pacific Nations Cup and establishing its Regional Office in Samoa to help develop high performance in sports not only in Samoa, but for the region,” said Faleomavaega who himself played halfback for the Manu Samoa.

“Having PacificAusSports based in Samoa will allow us more opportunities to work in partnership with our various domestic programs”.

Australia’s High Commissioner to Samoa says they are proud to be partners with Samoa’s national rugby team and looks forward to the ongoing relationship with Lakapi Samoa.

“We wish the Manu all the best this weekend!” concludes Her Excellency Emily Luck.