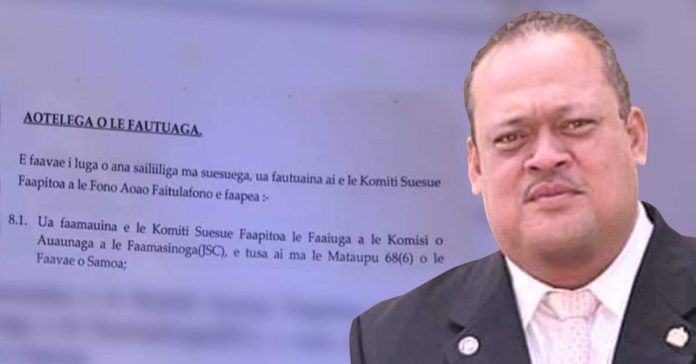 27 June 2019, Apia Samoa.  The Parliamentary Special Inquiry Committee selected to assess the matter of the Land and Titles Court President convicted by the Court of Appeal for assaulting a security guard, has recommended a conscience vote.

The Court of Appeal convicted and fined LTC President Fepuleai Atila Ropati for assaulting the Ministry’s night watchman during a staff end of year. function. Saili Leota sustained serious injuries when he was struck over the head by Fepuleai with an empty beer bottle.

In a first for Samoa, the Constitutional powers of Parliament to decide on the fate of a member of the Judiciary will be effected over the recommended conscience vote to be held next week.

The Prime Minister had explained in Parliament that “under the Constitution, Parliament has the power to decide on the fate of the Prime Minister, Speaker of the House, and any Judge in regards to alleged wrongdoing in their performance”.

He said that, “the Parliamentary Special Inquiry Committee will report back to Parliament who will make the final decision in a 2/3rd majority vote to either terminate the President or let him continue in the position”.

The Special Committee has recommended that Fepuleai not be removed, but also recommend that there be a Parliamentary Conscience Vote under S68(5).

8.1  The Parliamentary Special Inquiry Committee has noted the decision of the Judiciary Service  (JSC) wirh regards to the matter 68(6) of the Constitution of Samoa;

8.2  Based upon our assessment of written affidavits and interviews of witnesses, as well as Court records and decisions, the Special Inquiry Committee has arrived at a decision to advise Parliament to not remove Fepuleai Letufuga Atila M Ropati from the position of President of the Lands and Titles Court.

8.3  The Parliamentary Special Inquiry Committee advises Parliament to follow the process as outlined in 68(5) of the Constitution of Samoa to undertake a conscious vote amongst all members of Parliament.