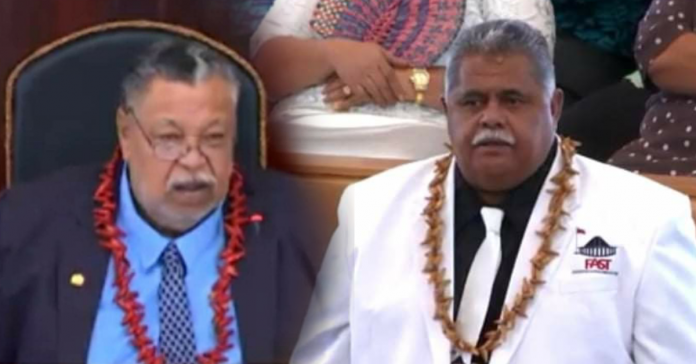 The Speaker of the House Leaupepe Toleafoa Apulu Faafisi took issue with the name used by FAST party leader Laaulialemalietoa Polataivao Leuatea Polataivao Fosi during his swearing-in before Parliament this morning.

Following a landslide win at a by-election held last month, the former Cabinet Minister who had also held the position of Speaker of the House from 2011-2016 re-entered Parliament this morning as the sitting MP for Gagaifomauga No3.

As a first order of business after the morning prayer, Laauli was called by the Speaker to come down to the centre of Parliament House, to take his oath.

After the formal reading of his oath, however, the Member of Parliament of 14 years was reprimanded and threatened by the Speaker of the House Leaupepe T. Toleafoa Apulu Faafisi.

Leaupepe took quite an issue with Laauli’s name, going as far as threatening to hold him in contempt of Parliament for being “dishonest”.

The Clerk of the Legislative Assembly had just handed Laauli oath papers to sign, when the Speaker of the House stopped proceedings.

“Before you sign the declaration.. I have to address this with you,” said Toleafoa.

“Because you have said Laaulialemalietoa, however, the documentation from the Head of State has Laauli..”

“And it is these differences that raised ill-feeling in the past..”

Continuing on, the Speaker said that the issue was a matter of righteous justice, and that the former Cabinet Minister could not be allowed to continue with the swearing-in procedures if he did not declare his correct name (ie Laauli and not Laaulialemalietoa).

He continued, “I cannot allow you to become a Member of Parliament if you do not tell us your correct name..;

“Because you can be charged with taking your oath, in a dishonest way….”

Laauli’s loud oratory voice was immediately heard over the microphone.

Shaking his head, Laauli repeated his oath, this time saying the shortened version of his matai title..

For the second time the leader of the newly established FAST party declared to carry out his duties honestly and with integrity..

Laauli had resigned from Parliament following a Parliamentary Committee investigation that recommended he be suspended following claims he had made about a personal procurement of an imported standby generator. Laauli had raised questions, suggesting extravagant spending on a supplementary budget item.

He returns to Parliament after a successful by-election.

Today’s special Parliamentary sitting was held for urgent amendments to the Electoral Act following a Court case claiming parts of the law were discriminatory.

An agreement was signed as part of negotiations held before Justice Tafaoimalo Leilani Tuala-Warren for certain provisions of Samoa’s Electoral Act to be redrafted and amended following a legal challenge brought by potential candidates.