The Speaker of the House has announced he has no power to prevent a candidate guilty of a corrupt arrangement or attempting to circumvent the process by resigning or withdrawing petitions already filed before the Court relating to charges of bribery and treating.

As election petitions and counter-petitions filed before the Courts were being withdrawn, the Supreme Court noted its disapproval of “corrupt arrangements” being entered into by candidates; where resignations were being declared to circumvent the process and avoid court hearings on charges of bribery.

Candidates were feigning resignations so Court petitions against them could be withdrawn, with intentions to just swing around again and run in the by-election created by their resignations.

In a statement issued this week, the Speaker Papalii Li’o Oloipola Ta’eu Masipa’u says the Electoral Act is “flawed and technically deficient” by not linking a corrupt arrangement (under s133) or an attempt to circumvent the process, to any form of sanction.

According to the Speaker there is nothing neither he nor the Electoral Commissioner can do because there is no provision that disqualifies a candidate from standing in a by-election, even if they have been found by the Supreme Court to have breached s133 of the Electoral Act by purposely entering into a “corrupt arrangement” and thereby circumvent the process of bribery and treating petitions against them.

The result is that the April 9th winner of the Sagaga 4 seat Tuisa Tasi Patea, a lawyer by profession who resigned to ensure the petition against him by FAST candidate Tagaloatele Poloa was withdrawn – is able to run again in the upcoming by-election.

Despite a comprehensive Supreme Court report to the Speaker outlining attempts by candidates to circumvent the petition process, the Speaker has announced that his hands are tied by deficiencies in legislation, and Tuimasealii Tasi Patea of HRPP and Tagaloatele Poloa of FAST can both register as candidates in the upcoming by-election. Tuisa had also prepared a counter-petition against Tagaloatele.

The decision by the Speaker essentially allows the candidates, accused of bribery in the April 9 general election, to call a truce and return to the polls for a rematch.

There is no guarantee that the by-election would not bring about further bribery allegations and more election petitions filed before the Court. There is also no guarantee that candidates will not “circle back” by resigning once more, and return to by-elections, yet again.

In his statement the Speaker has also announced Safata 2 candidates Nonu Teo Lomialagi Lose Niumata who won the seat in April, and FAST candidate Laumatiamanu Ringo Purcell, also eligible to compete in the upcoming by-elections.

The Supreme Court did not report Nonu Lose Niumata’s resignation and petition withdrawal as a corrupt arrangement or an attempt to circumvent the petition process, because the former General Manager of Accident Compensation Corporation (ACC) indicated he did not intend to compete in the resulting by-election.

In a recent sitting of Parliament, amendments to the Electoral Act were made ahead of the by-elections now scheduled for 12 November 2021. No amendments were brought before Parliament to fix the flaws referred to by the Speaker. 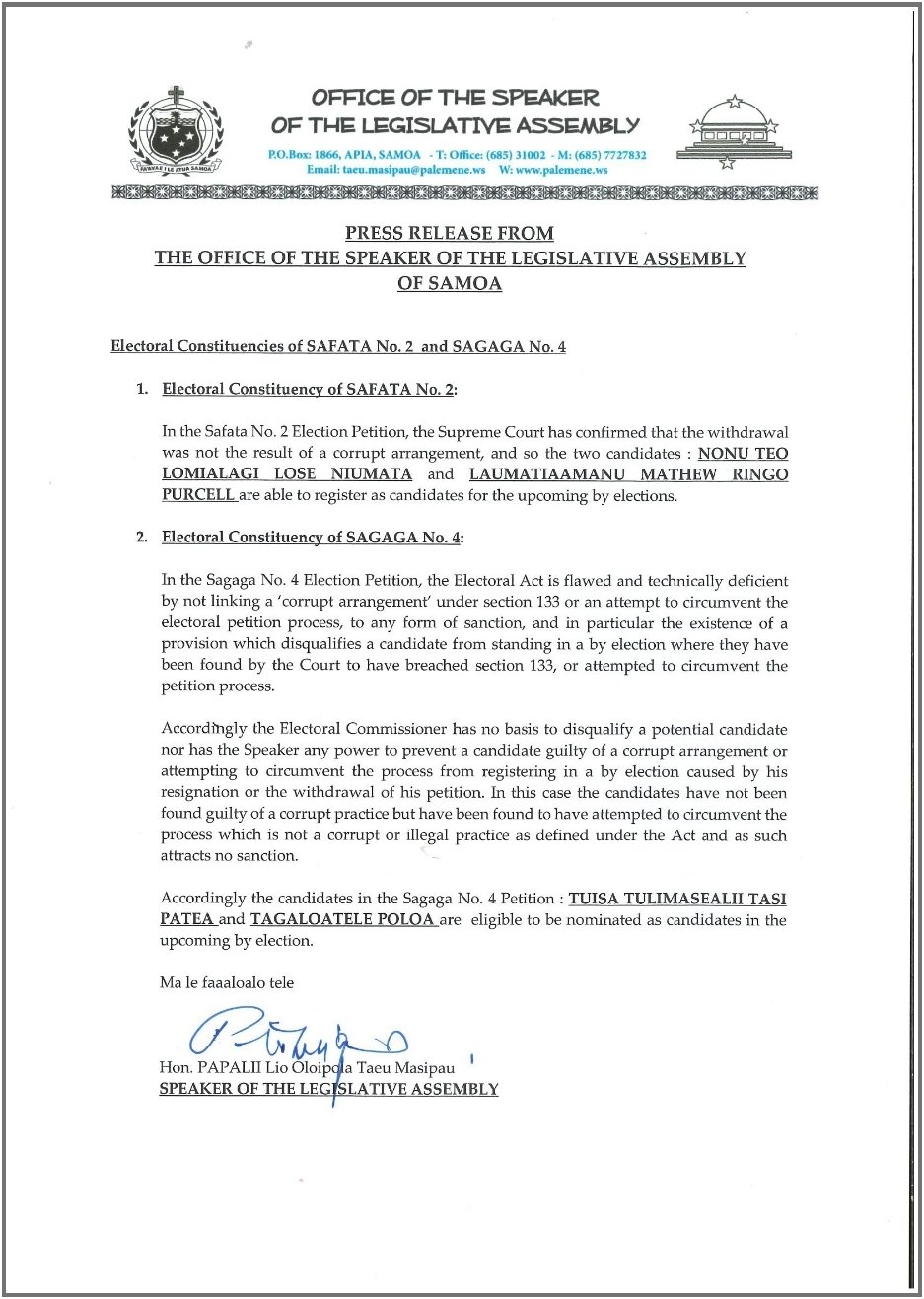