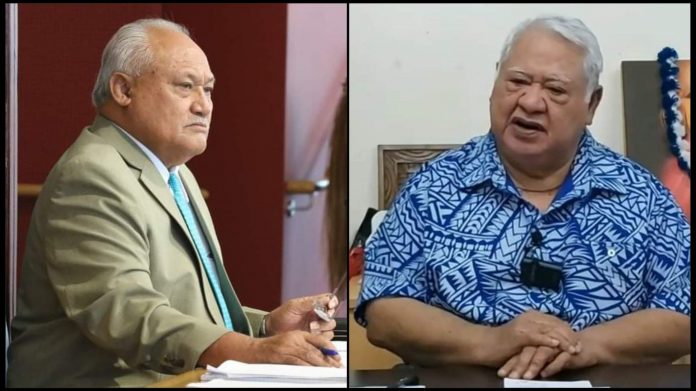 Apia, Samoa. The Speaker of the House has hit back at allegations by the leader of the opposition that his independence has been compromised by actively participtating in Government events and overseas trips.

In his weekly press conference with the media, former Prime Minister Hon Tuilaepa Sailele Malielegaoi said the Speaker of the House is ‘taking sides’ (manatu faapito) with the FAST party. Tuilaepa said the Speaker may not understand his role because he should not be paritipating in events such as road openings and the government’s recent trip to American Samoa for the Two Samoa Talks.

In an interview with Samoa Global News, Hon Papalii Lio Taeu Masipau says former Prime Minister and opposition leader Hon Tuilaepa Sailele Malielegaoi, has politicised his comments against the role of the Speaker with false accusations against him aimed at ruining his good name and reputation.

“This is dirty politics, it’s misleading and it’s not right,” the Speaker told SGN.

According to Papalii, he has never been to a road opening, and his trip to American Samoa was self-funded. The reason for his recent trip was to help his family to host faaaloaloga for the Government. He said he paid for his own fare, so that he could be there to help his family to pay their respects to the Government through the traditional giving of gifts or faaaloaloga.

“My family called and said they wanted to perform faaaloaloga for the Government.. that was the reason for my trip,” said the Speaker.

“I paid for my own airfare, I stayed at a hotel which I paid for myself, and went to my family for the planning of the faaaloaloga for the Government…

“Even the talks between the two Governments, I did not participate nor take part in any of it..”

The Speaker told SGN that false accusations by elected members is a serious misconduct and he would be looking to raising this as an issue in Parliament.

“I will advise Members of Parliament to steer away from making unfounded statements that are not based on facts..”

In response, Tuilaepa says the act of participating in the traditional paying of respects or faaaloaloga for the Government, compromises the Speaker’s position and independence.

“So he went to help his family to give gifts to the Government,” said the former Prime Minister. “So what is right about that?” – “O lea la le sa’o o lena gaioiga?