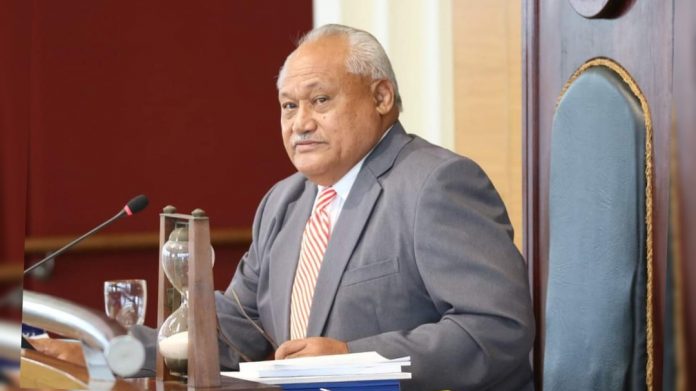 4 May 2022, Maota Fono, Apia Samoa. The Speaker of the House, Papalii Lio Taeu Masepau has referred a complaint against Tuilaepa and Laleailepule to a Parliament Select Privileges and Ethics Committee.

Under Parliamentary Standing Orders, a complaint filed by one MP against another must be referred to the Select Committee if the Speaker finds there are grounds to do so.

The heated exchange began when the Speaker did not give Tuilaepa an opportunity to speak while the leader of opposition was asking why their letter of complaint against Tuala had not been acknowledged.

“You’ve read out their submission but have not read out our submission which we had given to your Honorable sir.”

When the dust settled and Parliament had returned to calm, the Speaker explained to Tuilaepa that their submission or counter-complaint – was in the pipeline of Parliamentary processes, and in due time, would be announced accordingly.

Back to the complaint against Tuilaepa and Laleailepule, the Speaker revealed that it was filed by Deputy Prime Minister and MP for Gagagemauga No.1, Hon Tuala Tevaga Ponifasio.

Tuala alleges in his letter of complaint that by being found guilty of Contempt of Court by the Supreme Court, Tuilaepa and Laleailepule have “brought shame and embarrassment upon the institution of Parliament, as well as the Members of Parliament, past and present.“

Tuala had laid out the basis of his complaint in a five-page letter to the Speaker, asking that the HRPP party leader and secretary be referred to the Privileges and Ethics Committee for investigation.

This morning in Parliament, the Speaker announced that he had made a decision to refer the allegations to the Privileges and Ethics Committee for review, after reviewing both the letter and the responses from the MPs implicated.

The Speaker read out the names and the nine members of the Select Committee tasked with looking into the matter.

2. Hon Lautafi Sio Selafi Purcell to represent the leader of the opposition because Tuilaepa is implicated.

against the opposition leader and party secretary

The letter of complaint, however, alleges that there has been a breach of Parliamentary Privileges and that Tuilaepa and Lealailepule were in “Contempt of Parliament”.

The Privileges and Ethics Committee

Established under Standing Order 181, its membership includes the Prime Minister, Leader of the Opposition and seven non-Minister members. It is responsible for investigating matters of privilege presented to them by the Assembly, such as enquiries into the private conduct of members and breaches of the Code of Parliamentary Ethics.

Reports by this Committee, once tabled in the House are given precedence over the consideration of all other reports.