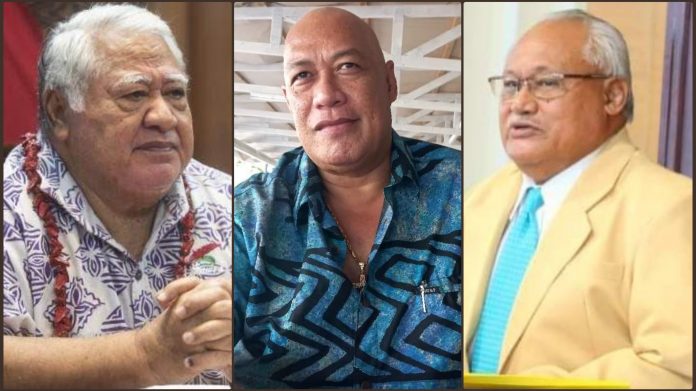 29 April 2022, Apia Samoa. The Speaker of the Legislative Assembly, Hon Papalii Lio Taeu Masipau this morning announced in Parliament that he had received a formal letter of complaint against certain members of the house, filed by another member of the house.

The Speaker did not reveal which members the complaint was against, nor did he reveal who the complainant was, stating that he would first need to ascertain if there has, in fact, been any breach of parliamentary privileges and proceedings.

He did state that the letter is received under Standing Order 178 – which allows one MP to write to the Speaker to essentially complain about another. Papalii added that the allegations were made under SO 180 – breach of Parliamentary Privileges.

The Speaker set the matter aside and continued with the days’ Parliamentary agenda, stating that the members against whom the allegations were made, had until 4pm on Monday next week 2nd May, to submit their responses.

Later at a Human Rights Protection Party press conference however, opposition leader Tuilaepa Sailele Malielegaoi confirmed that the letter was directed towards himself and HRPP party secretary, Lealailepule Rimoni Aiafi.

Tuilaepa rejected the allegations and said they were frivolous and without basis.

A copy of the letter of complaint obtained by Samoa Global News reveals that it is based on the recent Supreme Court decision where both Tuilaepa and Lealailepule had been found guilty of Contempt of Court.

The decision, which was handed down by overseas-based Justices, Robert Fisher and Raynor Archer, had applied, “very special circumstances” and  ruled that the Court would “impose no penalty” on Tuilaepa and Lealailepule, referring heavily upon a “Harmony Agreement” signed by Prime Minister Hon Fiame Naomi Mataafa, and Hon Tuilaepa Sailele Malielegaoi, as leaders of the two main political parties.

The maximum penalty for Contempt of Court is 12 months imprisonment, however, as Tuilaepa and Lealailepule reminded the media this afternoon, Members of Parliament only lose their seats if they are found guilty of crimes for which the maximum penalty is 4 years imprisonment, and/or $2,000 tala fine. Tuilaepa had further stated during the press conference, that the Contempt of Court case against them was a civil case, and not a criminal one.

The letter of complaint, however, alleges that there has been a breach of Parliamentary Privileges and that Tuilaepa and Lealailepule were in “Contempt of Parliament”.

The complainant alleges that Tuilaepa and Lealailepule had, “also made comments and statements which denigrate and insult the Legislative Assembly of Samoa by suggesting or inferring that the new Government is in some way illegitimate, arising by a coup d’etat’ by the Judiciary, and is described as being ‘unconstitutional’ which in my respectful view undermines the status, authority and dignity of the Legislative Assembly..“

The letter of complaint alleges that the behaviour and conduct of “the Two MPs during 2021” had “brought shame and embarrassment upon the institution of Parliament, as well as the Members of Parliament, past and present.“

The complainant then also alleges the behaviour of “the two MPs during 2021” had “undermined public support and respect for the MPs role as well as the institution of Parliament”.

The letter of complaint then goes on to give specific examples of the allegations made, and throughout also states that these are findings of the Supreme Court decision.

The complainant concludes with a request to the Speaker, that the two MPs be referred to Parliament’s Privileges and Ethics Committee.

“Accordingly I lodge this formal complaint under Standing Order 178, and respectfully invite you to consider that the actions and behavior of the Hon. Tuilaepa and Hon. Lealailepule have raised questions of Parliamentary Privilege and should now be referred to a Privileges and Ethics Committee convened and appointed under SO177”.

In Parliament this morning, the Speaker stated that under parliamentary standing orders, he would first need to assess whether or not Parliamentary process had been breached.