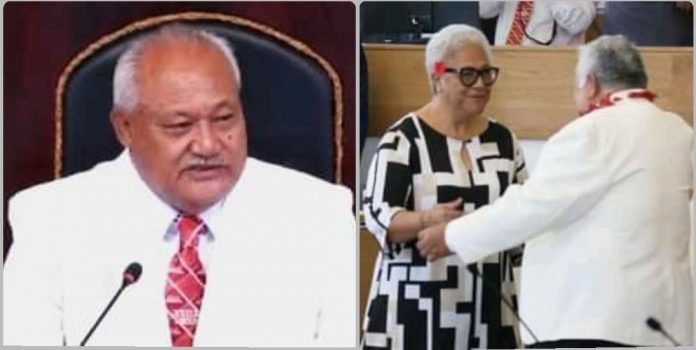 17 September 2021, Apia Samoa. Before the court-directed swearing-in of 18 members of the Human Rights Protection Party, the Speaker of the House Papalii Lio Taeu Maispau in his opening remarks, sought forgiveness from the nation.

Papalii acknowledged Parliament as a House of members elected by the people, and asked Samoa to forgive any shortcomings they may have shown as leaders, during the recent political turmoil caused by a rollercoaster of events since the general election in April.

The Speaker called for forgiveness between parties and between Members of Parliament, asking everyone to move forward, forgetting the hurts of the recent past.

“This day shall go down in the history of Parliament. Let us forget the past; and let this be a historical day to commemorate our forgiveness of each other,” said Samoa’s newly appointed Speaker.

The Speaker called on all Members of the Legislative Assembly to protect the integrity of Parliament in moving forward, as each member focuses on their individual calling as members of the XVIIth Parliament of Samoa.

“We have placed this day and all our plans before God.. I believe none of us will want to think back to the events of the past, but instead move forward to protect the integrity of Parliament with a focus on our calling as representatives of the nation,” said Papalii. s we have been called.”

Parliament proceedings moved straight into the swearing-in after the opening prayer, and following the Speaker’s address, HRPP leader Tuilaepa Sailele Malielegaoi asked for the opportunity to address Parliament.

Speaking for the first time as a member of the opposition in his 40-year career as an MP, Tuilaepa thanked the Speaker and acknowledged him as the Head of Parliament (faatama o le Maota). He congratulated Prime Minister Fiame and her Cabinet and the new FAST  government and spoke at length about the peace there has still been in Samoa, despite the recent political crisis.

The swearing-in of the 18 HRPP elected Members of Parliament was the only item on the agenda for this morning’s session. Parliament will reconvene on Monday, to continue parliamentary debates and discussions on the tabled Budget Estimates for the remaining months of 2021-2022.

The 18 Members of Parliament for HRPP sworn-in on Friday 17 September 2021: