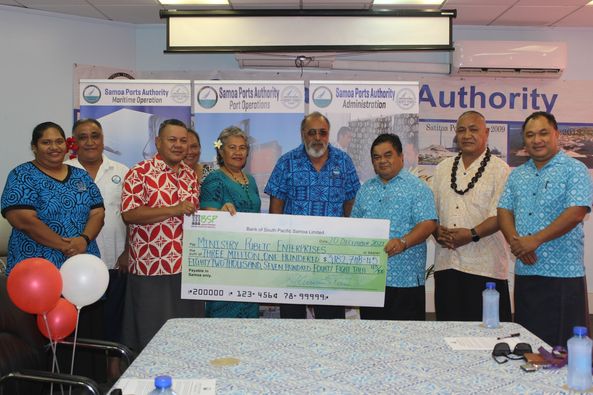 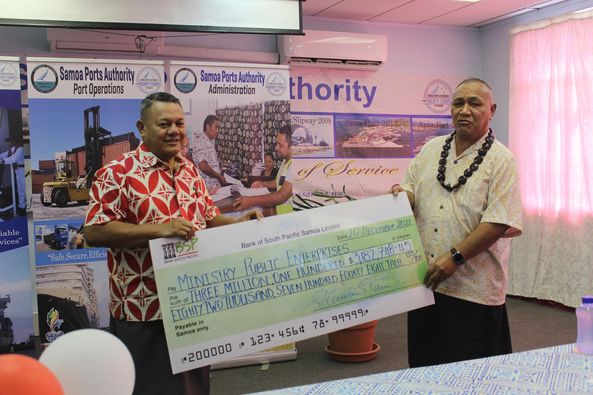 Apia- 20 Dec 2021- The Hon. Minister of Works, Transport and Infrastructure; Afioga Olo Fiti Afoa Vaai presented on behalf of the Chairman and the Board of Directors, the Management and Staff of the Samoa Ports Authority a Dividend cheque of $3,182,748 to the Minister of the Ministry of Public Enterprises Hon. Leatinuu Wayne Sooialo.
The Dividend declared and approved by the SPA Board represents 35% of the Audited Net Profits for the financial year concluded on 30th June 2021. This is the sixth consecutive year SPA has recorded a profit which has allowed SPA to pay it’s shareholder; the Government of Samoa 35% as stipulated under the Public Bodies Act.
The past 5 years have seen SPA turn in optimal financial performance since it’s inception in 1999. This Financial Year has seen SPA maintained that same trajectory in a remarkable one financially in light of contraction in Port activities due to the pro-longed SOE restrictions; SPA recorded a Net Profit of $9,093,567 despite booking a loss on impairment of fixed assets valued at $2,292,067 due to the perceived reduction in the values of the underutilized wharves of Satitoa and Asau as recommended by external auditors of which was discussed and agreed to by SPA.
This is the highest Net Profit achieved by the Authority since it was set up 22 years ago and SPA noted having paid to the Government a combined total of $16,217,015 million Tala in dividends from 2016 to 2021.
As a State Owned Enterprise, SPA was established under the Ports Authority Act 1998 on 1st July 1999 and is proud of it’s sound financial performance thus far and being able to honour it’s statutory responsibilities such as paying prescribed dividends to assist our Government with many developments which have and are reaping immense benefits for our Country. Moreover, irrespective of the impacts of Covid19 during the financial year, SPA still managed to record the highest profit ever of which all glory should be returned to the Omnipotent.
SPA wishes to express its warmest appreciation to all the Port-users and stakeholders for their patronage and cooperation which have contributed to the excellent results. We acknowledge with appreciation the support from our Government, it’s business partners and port users and all stakeholders, the Board of Directors, Management and most importantly, the hard working staff and their families of whom is the driving force behind the positive results.