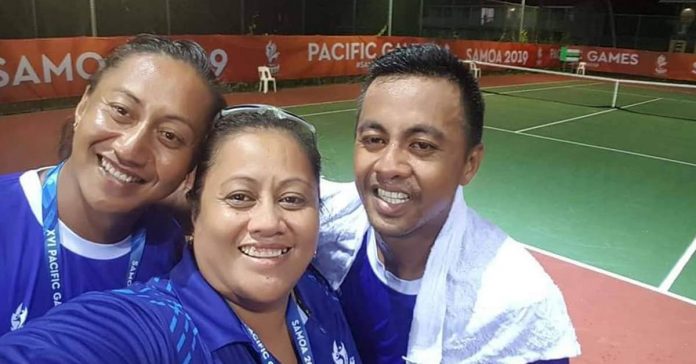 Tennis is like a second religion for the Soonalole family  who have all won gold medals for Samoa having competed in Pacific tennis tournaments for over a decade representing Samoa.

30 year old Marvin Soonalole says it has been a tough week and each year players from competing nations get younger as he and his brother get older.

“Leon is just one year older than me;

One of their most loyal supporters is Pacific Games gold medalist and older sister Dengue Soonalole who is a household name in Samoa for her achievements in tennis.

Dengue congratulated her younger brothers on winning the bronze medal for Samoa.

“Congratulations to my baby brothers Leon and Marvin; tennis is the sport with the toughest format in the Pacific Games.”

Dengue knows well the struggle of competing in a tournament where the different categories of Teams, Individuals, Doubles, and Mixed Doubles are all played within 10 days, by the same players! The rain throughout the week meant that the last few days were congested with matches to make up for the lost time.

The national tennis champion who is a Sports Administrator with SASNOC jokes that she may return to tennis, but this time to coach her brothers at the next Pacific Games.