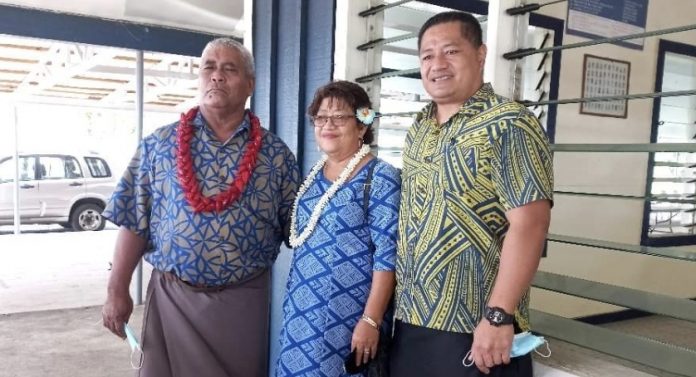 One of two HRPP candidates who had just last Friday registered for the upcoming Gagaifomauga 2 by-election has withdrawn from the race. Former Associate Minister of Justice, Sooalo Umi Feo Mene, had today withdrawn his nomination to throw his support behind Sooalo Fineaso Poka of HRPP.

Speaking to Samoa Global News, village spokesman Sooalo Kome, said Sooalo Mene has decided to withdraw his nomination lodged only last week Friday, because the timing was not right for him and his family.

Sooalo Kome said this way, the support of the village and family would be focused on the remaining candidate, Sooalo Fienaso Poka.

Maulolo Tavita Amosa, HRPP MP for Sagaga 2 spoke in response to the contingent who had travelled from Savaii to confirm the withdrawal of Sooalo Mene.

Maulolo spoke to convey the party’s acceptance of the decision, and said this was tactically a good move to singularly support one candidate. He credited the facilitative approach of the Samoan culture to arrive at such as joint decision with mutual benefits.

The remaining candidate, Sooalo Fineaso Poka, told Samoa Global News he was thankful to Sooalo Mene for his decision made known today. He said the truth is, he had found comfort knowing that the two of them were going to run as candidates together, because they are, after all, brothers, however, he is now also at peace that Sooalo Mene and his supporters would be backing his campaign.

He said he is prepared for the June 3rd by-elections, and wished it were sooner.

“I wish it were scheduled for tomorrow or even next week,” he said.

After the consultation, HRPP Deputy Leader Fonotoe Nuafesili Lauofo and Secretary Lealailepule Rimoni Aiafi, accompanied the matai and candidates to the Office of the Electoral Commissioner, to formally withdraw their second candidate.