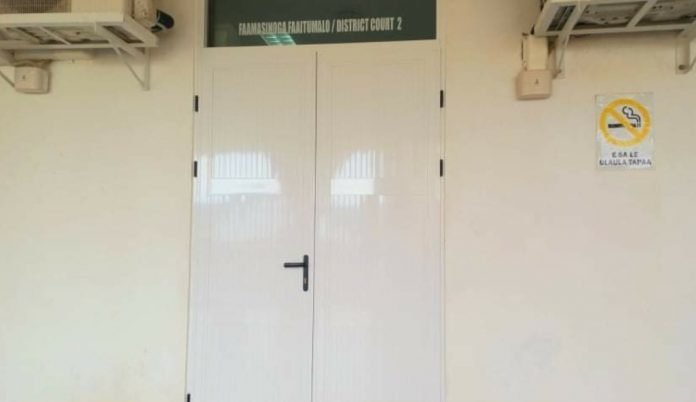 A solo mother who was unable to control her adolescent son’s drunken rages, could not save him from a custodial sentence in the District Court this morning.

The mother of Joseph Jan Amani Tolo couldn’t hold back tears in Court when her son, a repeat offender, was handed down two months jail sentence.

Represented by defence counsel Afamasaga Michael Soonalole, Joseph pleaded guilty to charges of intentional damage and uttering threatening words. The Court heard that Mr Tolo had been intoxicated at the time, and yelled obscenities to his uncle – the matai sa’o of the family, and also towards his mother who then called the police for help.

At the time of the incident, the defendant was on probation for a similar offense where the Court had granted him a non-custodial sentence of community service last year.

In handing down the sentence, Judge Talasa Atoa-Saaga spoke sternly to the defendant, a young man in his 20s.

“You  should be helping your mother, instead of causing her pain. You should be a blessing to her, however, you continue in your ways and have not learnt from past mistakes,” said Judge Atoa-Saaga.

“Your mother has not been able to control you, especially when you are under the influence of alcohol, and so she turned to authorities for help,” added the District Court Judge.

Mr Soonalole presented letters of support received from the young man’s uncle, the matai sa’o who said Tolo had changed, and was now home helping his mother with family chores. He also said Joseph was no longer drinking alcohol, and would often come to check on him if there was anything needed to be done for the family.

Defence counsel told the Court that Joseph was not represented during his first case, which had happened around the time of his parent’s separation. The Court heard that the defendant’s father now lived in Savaii, leaving his mother as a solo parent.

Judge Atoa-Saaga addressed the defendant’s mother in Court and asked how many children she had. Mrs Tolo responded she had only two children. One was overseas and Joseph was the only one in Samoa.

The mother then pleaded with Judge Atoa-Saaga to please give her son another chance.