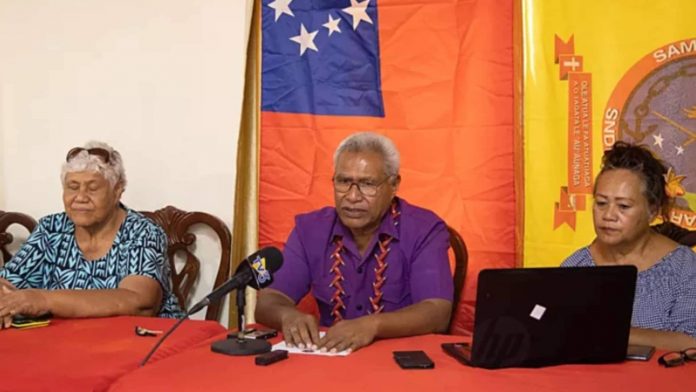 A newly formed political party in Samoa has come out to criticise the Government’s response and handling of the measles outbreak that has claimed at least 73 lives, mostly children under the age of four.

The Samoa National Democratic Party called a media conference yesterday morning to publicise their views and call for the resignation of the Ministry of Health Director General Leausa Dr Take Naseri for “giving the Prime Minister wrong advice.”

“I call on the Prime Minister to sack him,” said Party spokesman Vui Seinafolava Masinamua.

Vui and four other members of the political party said they had called a press conference because people had asked for their views.

SNDP say that, “Social and health development was not given a priority” by the ruling Human Rights Protection Party.

After saying that Tuilaepa should sack his DG of Health, SNDP then also called for the Prime Minister and Government to step down.

The SNDP have criticised the Government for responding late to the measles crisis and for pointing fingers to parents for the low vaccination coverage which has claimed at least 73 lives in the past two months.

“The Government turned around and blamed the parents,” said Vui.

SNDP stated that the solution is for Government to “step down and let the people decide”.