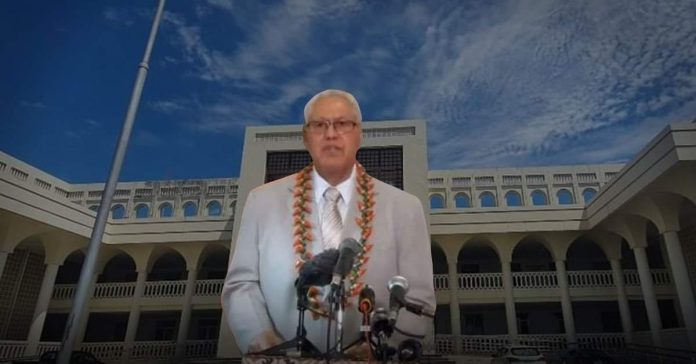 Samoa’s Head of State, HH Tuimalealiifano Vaaletoa Sualauvi II, has called a snap election on the eve of a substantive Supreme Court hearing to decide the legality of the decision to add a 52nd Member of Parliament, and consequently determine if Samoa is in fact in a state of a hung Parliament or not, following its April 9th general elections.

Delivered from the Head of State’s Vailele residence at 8pm last night, the announcement was handed down as a royal decree not to be questioned, and confirms the Electoral Commissioner has been directed by writ, to conduct general elections for Samoa in 15 days time, on Friday 21st May 2021.

The move essentially hijacks a much anticipated Court hearing set to be heard this morning before senior Justices of the Supreme Court, to consider a FAST party motion that stems from yet another Head of State announcement – declaring an additional Member of Parliament under the now thoroughly-analysed Article 44(1A) of Samoa’s Constitution.

In what feels like a nauseating case of deja-vous, last night’s declaration is exactly two weeks to the night of Tuesday 20th of April, when Samoa was taken by surprise by a Head of State announcement to add HRPP’s Aliimalemanu Alofa Tuuau as a 52nd Member of Parliament.

That declaration was made after 9pm on the eve of Independent MP Tuala Iosefo Ponifasio announcing his allegiance to FAST – a decision that would have shifted the balance of power to FAST 26 – HRPP 25.

Samoa would have had an election winner with a narrow majority of 26-25, had the Head of State not announced the addition of HRPP’s Aliimalemanu Alofa Tuuau on that night of April 20th. By that announcement, Samoa’s General Election results were adjusted to 26-26, essentially creating a hung Parliament.

In a vicious cycle of events, that very situation of a hung Parliament is now the basis of a decree to call fresh elections..

A move FAST party leader Hon Fiame Naomi Mataafa says has been made, “to preempt and undermine the decision of the Supreme Court before it has been made”.

Just hours before the Head of State’s announcement, the FAST party leader, in a public statement aired live on the party’s social media pages, made known her side’s intention to reject the decision to go back to the polls, and questioned the Head of State’s constitutional power to call fresh elections at this time.

“There is a 26-26 deadlock and that is a result of a decision and action taken by the Electoral Commissioner and signed by the Head of State…that decision has been challenged and the hearing is set down for tomorrow (Wed 5th May) before the Supreme Court who are likely to give their decision promptly given the significance  of the issue,” said Samoa’s former Deputy Prime Minister.

“Why would the Head of State not wait for that decision to come out before acting?” asks Fiame.

In a detailed interpretation of the process, the leader of FAST says the Constitution is clear as to when fresh elections can be called, and Samoa is not there yet. Fiame highlights Article 52 of the Constitution requiring the Head of State to call Parliament by the 45th day from the date of a general elections, or Monday 24th May 2021.

“It is at that session that either (a), I can confirm that I have the support of majority of the members of Parliament and can be sworn in as Prime Minister or (b), it can be confirmed that there is a 26-26 equality of votes for myself as leader of FAST and whoever the leader of HRPP will be at that particular time..”

“It is at that specific time that the Head of State can confirm the swearing of a new Government or can confirm that no one and no party has the majority within Parliament, and can then call (a) an adjournment to adjourn the session and await the outcome of the electoral petitions or (b) call for fresh elections.”

Fiame questions the integrity of the Head of State’s declaration and vehemently rejects the legality of the call for new elections.

In his written statement, His Highness Tuimalealiifano Vaaletoa Sualauvi II says he is acting as a father, a brother, and a son to the people of Samoa, and must call new elections because of the instability he has observed; and then goes on to question the confidence of the public in the Judiciary.

As part of his reasoning for the decision, the Head of State claims, “political leaders and supporters on both sides have laid serious accusations against the impartiality of the Court..”

The Head of State does not provide evidence of the serious allegations, but does conclude that these statements, perhaps referring to those made on Facebook and Tik Tok, “lessens the appearance” of the Court to carry out its role as the third independent arm of Samoa’s democratic governance structure.

In the express view of Samoa’s Head of State, “accusations against the impartiality of the Court, lessens the appearance of that arm to discharge its constitutional and common law functions to interpret and apply our laws”.

The Head of State then concludes in his statement that, “Whatever the outcome of the petitions, the decisions of the Courts will be questioned and viewed through that prism”.

HOS Address Published below in Verbatim

I speak to you now my beloved Samoa not only as your Head of State, but as a father, a brother, and a son to you all. On Friday, 09 April 2021, our country went to the polls to select for ourselves the 17th Parliament for Samoa. To date, the 17th Parliament has yet to convene.

After polling day, I have been observing with particular care, interest and concern the events that followed.

Since polling day, there has been a deadlock in the 52 seats of Parliament between the HRPP and the FAST Party, with the additional seat for women now before the Court for their determination.

On Friday, 30 April 2021, some 28 petitions have been filed by candidates seeking to question the 2021 General Elections. I have been advised that there are no overlaps in the petitions and that the petitions seek to question elections of Members from 28 Constituencies. The first Mentions for the petitions took place before the Court today, Tuesday, 04 May 2021.

Essentially, the Courts will determine the election of 29 seats of Parliament, including the additional seat for women representing more than 50% of the Membership of Parliament.

The Political discourse has done little to assist matters.

Political leaders and supporters on both sides have laid serious accusations against the impartiality of the Court, lessening the appearance of that arm to discharge its constitutional and common law functions to interpret and apply our laws. Whatever the outcome of the petitions, the decisions of the Courts will be questioned and viewed through that prism.

As per the normal course of petitions, it is expected that there will be counter petitions, bringing the number of petitions to 56 petitions. The resolution of those petitions may take the remainder of 2021 to resolve, especially if the Court orders a by-election for each constituency. In which case, those constituencies would have to go through nomination challenges prior to their by-election and then election petitions afterwards.

Aside from the time consuming aspects of the 56 petitions, the number of petitions represents a concerning statistics about the conduct and practice of candidates for the 2021 General Elections.

As politicians go about their political affairs and the Courts with their deliberations, the operation of the Government remain uncertain. By June 2021, the financial year 2020/2021 will come to an end, and with it the ability of Government to pay salaries of its employees, meet its expenses and pay for services- including essential services such as health and education. If the 2021/2022 budget is not tabled and passed, it will have overreaching effects on the everyday functions of Government, including its ability to respond to the Covid 19 Pandemic and sustain its current responses.

There must be in place by June 2021 a Parliament to pass the 2021/2022 Budget in order for Government to carry out its usual fiscal responsibilities.

Separately, a delay in forming Parliament may affect our regional and international responsibilities and effectiveness of our partnership arrangements.

The uncertainty regarding the results of the elections has affected every fabric of our society.

With these considerations in mind, I have sought advice as to my role in these uncertain times. I have been assured that as the Head of State I am able to call fresh elections where, after a general election, there is no clear majority to form a government; and where it is in the public interest to do so.

I have been further assured that if fresh elections are to be called, elections may take place as soon as possible and be completed by Friday, 04 June 2021 from when I, as Head of State, calls for it.

I have also consulted the leaders of the HRPP and FAST regarding my decision and they are aware of it.

Having taken into account the consideration that I have referred to above, I am of the firm belief that given the fact that there is no majority to form a Parliament, it is in the best interest of Samoa that fresh elections be called to allow our people a second opportunity to elect for itself its 17th Parliament.

Today, by Writ, I directed the Office of the Electoral Commission to issue a Public Notice of the Writ for Election of Members of Parliament for all Constituencies and have appointed Friday 21st May 2021 as the day of Election.

In doing so, I hereby revoke the Warrants of Appointments issued on the 12th March, 16th April and 20th April 2021 in relation to the General Election held on the 9th of April 2021.

I take this time to wish Samoa a peaceful election and pray for the Lord’s counsel and guidance as we seek to elect our Members of Parliament.