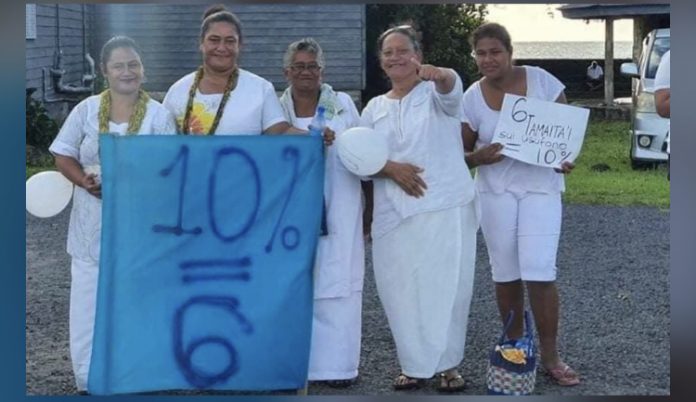 2 June 2021, Courthouse Mulinuu, Apia.  The Court of Appeal has delivered its much anticipated decision on the interpretation of Article 44(1A), saying the requirement of 10% women, equates to 6, however, the application of the reserve seat for women can only come into force after any by-elections which may follow election petitions.

The Court of Appeal has set out the timing of when Article 44(1A) can be applied by the Electoral Commissioner. He must await the result of any by-elections that result from election petitions.

The immediate effect of the decision means FAST maintains its one seat majority with 26 seats, while HRPP with 25.

The Electoral Commissioner cannot decide if the additional seat for women is needed, until after the decisions of Electoral Petitions now before the Supreme Court, and any subsequent by-elections that may follow.

There were 28 election petitions filed following the general election; against 14 FAST and 14 HRPP elected members. Three of those petitions are against women who had won at the polls. Matamua Vasati Pulufaga from Faasaleleaga 1, Mulipola Anarosa Ale Miloo of Palauli 1 and Aeau Leota Tima Leavai of Falealupo have all been petitioned.

The minimum requirement as set out in Samoa’s Constitution is intended to ensure that at least 10% of Parliamentary seats are occupied by women. The Court of Appeal has interpreted that to mean 6 seats, however, Aliimalemanu Alofa cannot automatically be selected, because in the event of any by-elections, sufficient women may  win at the polls, and the minimum requirement under Article 44(1A) would therefore not need come into effect.

However if after by elections there are still less than 6 women, then the woman or women with the highest percentage of votes attained, are considered to make up the 6 seats.

Aliimalemanu was appointed by warrant of election after the April 9th general election because she attained the highest percentage of votes amongst unsuccessful women candidates.

The full written Court decision will follow. An exerpt is below:

Conclusion
[38] The Supreme Court made the following declarations and we conclude on each as follows;
1) Article 44(1A) should be activated by the Electoral Commissioner. We dismiss the cross appeal and uphold this declaration;
2) Article 44(1A) should be activated after the final count of the ballot papers and before
reporting to the Head of State.
We allow the cross-appeal on this point. We hold that the determination under Article 44(1A) must be made on the basis of the General Election results as finally determined after the results of any electoral petitions under the Electoral Act 2019 and by-elections pursuant to the terms of that Act;
3) The activation by the Electoral Commissioner of Article 44(1A) on 20 April 2021 was
unconstitutional and that the Warrant of Election issued by the Head of State appointing the
Second Respondent as Member of Parliament is void. We agree with the conclusion that the Supreme Court reached in relation to the third declaration, but we reach that result for different reasons. We consider that it is not necessary to refer the matter back to Parliament for clarification. We hold that a plain interpretation of Article 44(1A) provides that the
appointment can only be triggered after the final results are known, and this point is reached when the results of the electoral petitions and by-elections, if any, are known. We consider that this is a principled way by which Art 44(1A) can be triggered, rather than an ad hoc snap shot moment in time
approach, which appears to have been adopted by the Commissioner.

[39] Finally, we allow the appeal on the basis that the majority decision in the Supreme Court is
wrong in law as to the number of additional members being 5. We consider that Article 44(1A) is
ambiguous as to the ideas that it promotes, and that primacy should be given to whichever of the competing ideas best promotes the establishment of human rights practice in Samoa. In this case, that means we consider the prevailing measure is a minimum of 10% of women representation, which is 6 women.
[40] We commend the Second Appellant’s tenacity in bringing this appeal which champions
women’s representation in Parliament. Although we have found that 10% means 6 women in Parliament, it remains to be seen whether she will be appointed an additional member to satisfy the 10% requirement. It is only after petitions and by-elections can it be confirmed whether there is a need for recourse to Art. 44(1A) and if there is, whether the Second Appellant remains eligible to be
made an additional member.
[41] We consider each party should bear their own costs.