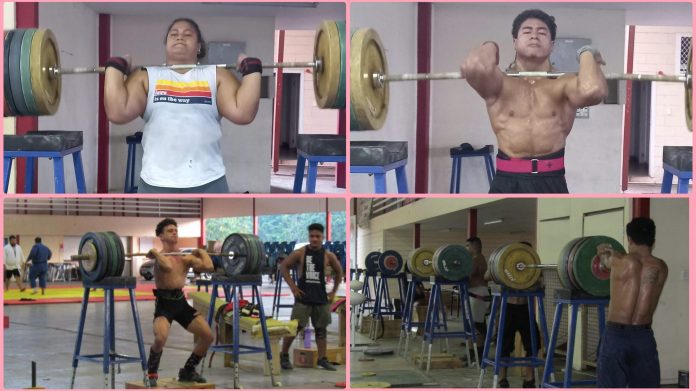 Samoa’s medal winning Weightlifting Team have succeeded in qualifying six lifters for the upcoming Commonwealth Games scheduled for Birmingham in the United Kingdom between 28 July and 8 August this year. 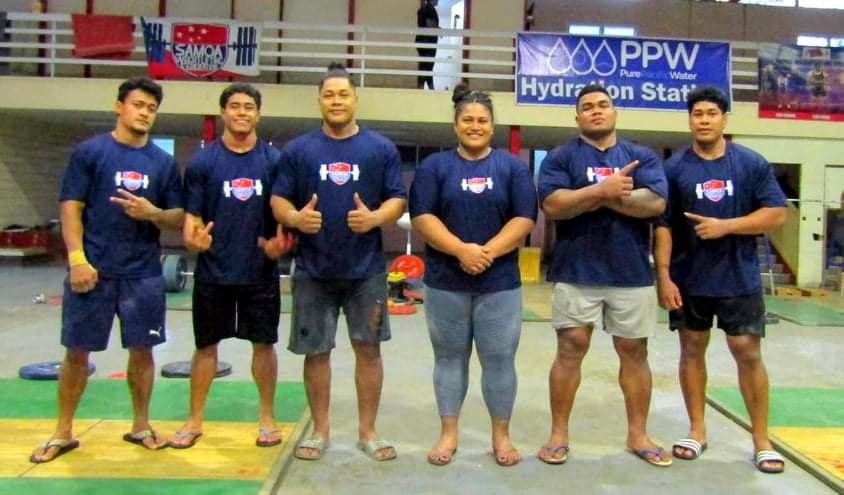 Championship Coach and President for Samoa’s Weightlifting Federation, Tuaopepe Asiata Jerry Wallwork said more lifters from Samoa would have qualified if Commonwealth Games rules had allowed more than one member into each division.

“The Commonwealth Games rules allows for just one team member per division, otherwise more of our lifters would have definitely been able to qualify,” said Tuaopepe when SGN visited their Tuanaimato training gym.

Gold Coast Commonwealth Games silver medalist for the 86kg division, Don Opeloge, has qualified for the 96kg division. In 2019 at just 20 years old, Don Opeloge wrote himself into the history books as the first ever medal winner for Samoa at an International Weightlifting Federation (IWF) World Championship with a gold medal. Don Opeloge set an Oceania Senior Record in the Men’s 96 kilogram division with a Snatch of 176 kilograms in May last year.

The famous weightlifting family continues to produce elite athletes with Jack Opeloge also qualifying for the 109kg division. There are seven Opeloge’s on the IWF results database and the two young men under the guidance of Coach Tuaopepe continue the legacy of weightlifting icons Ele, Mary and Niusila Opeloge.

Veteran Vaipava Nevo Ioane, who won a silver medal for Samoa in the 2014 Glasgow Commonwealth Games has qualified for the 67kg division. In 2019, Ioane won the 67kg division gold at the 2019 Pacific Games. Vaipava Nevo Ioane is a five-time Oceania Championship gold medalist, and three-time Commonwealth Championship gold medalist. The 33 year old veteran has been representing Samoa since his 2010 silver medal win at the Oceania Championships when he was just 22 years old.

John Tafi has qualified for the 73kg division. The 19 year old set a new world record for the Oceania region in the Junior and Seniors’ Men’s 73-kilogram division in May last year. Pacific Games medalist Petelo Lautusi is the sixth team member, having qualified for the 109+ division.

Crowned 2021 Oceania regional champions for both men’s and women’s divisions, Samoa’s record-breaking weightlifters hope to be able to travel to the UK in four months time for the Commonwealth Games. After four years of Olympic preparation, Covid-19 restrictions led to the heartbreaking withdrawal of three Olympic qualified weightlifters from the Tokyo Olympics. Vaipava Nevo Ioane – 67kg Men, Don Opeloge – 96kg Men and Iuniarra Sipaia – 87+kg Women could not travel and missed out on the Olympic dream.

The Samoa Weightlifting Team have been in a continuous camp in preparation for the Commonwealth Games, and have other competitions to focus on the lead-up to their preparations.

There is the Oceania Cup Online in March, the Youth Championship and the Junior Championship, as well as the Pacific Mini Games in June. “Our team will be competing in all those tournaments, as part of their preparation to the Commonwealth Games in July,” said Tuaopepe.

The training regime for Gold is no easy feat. The three daily sessions run from 5-7am, 11am to 1pm, and then 5-8pm. “We train three times a day, seven days a week including Sunday,” said Tuaopepe.

“To excel in a sport and be able to compete at the highest level of world class competition requires a high level of commitment,” said Samoa’s weightlifting coach.  “Players must be completely focused with no distractions, and have the right attitude towards training, nutrition, and maintaining themselves both physically and mentally for this level of competition,” he added.

Tuaopepe had spoken out on recent player issues in the Manu Samoa 7’s squad, who had received strength and conditioning training with Tuaopepe for the past year.  “What arose out of the 7’s squad must not be allowed to penetrate into other sports,” he had said. “to have players criticise coaches when they’re unable to cope with the training programme set down..”

SGN was able to speak with two Commonwealth Games medal hopefuls. Feagaiga Stowers and Don Opeloge both shared the same sentiments towards the disciplined approach taken by Tuaopepe.

“We have been camped for a long time,” they said. “We went for a break at Christmas and came back in January”.

“Our bodies are now conditioned to the training, and we are all used to it,” said Feagaiga. “We have rules to control the food we eat, we stay here in camp and don’t go out and about, and our phones are also removed until Sunday… those rules allow us to stay focused on our training and we don’t have to be distracted and spend wasted hours on social media that’s no use to our goals”.

Don Opeloge adds, “We can win medals because we train at the level of gold medal winners.. our coach has the winning formula and we trust him to take us through the right training to achieve our goals..

“Yes it is hard and very disciplined training,” says the Junior World Champion, “but that’s what it takes to compete with the best in the world,” he adds.

Samoa’s all time medal tally at the Commonwealth Games for weightlifting is two gold and two silver.  Sanele Mao (105 kg) is Samoa’s other gold medalist, and Lautiti Lui is Samoa’s other silver medalist.

Tuaopepe Asiata acknowledged the government of Samoa for its ongoing support for Weightlifting, as well as their sponsors. He called on the nation’s support and prayers as the six athletes prepare for the Commonwealth Games.