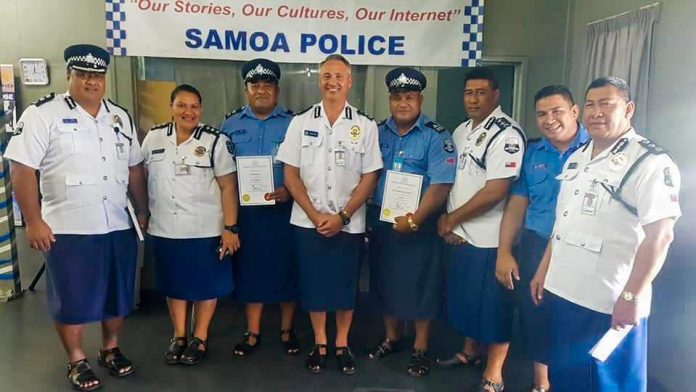 05 November 2020, Apia Samoa. The Samoa Police Service has been made stronger through the addition of 1 Inspector, 1 Sergeant, 1 Senior Sergeant, and 3 Corporals.

Certificates were presented at a small private ceremony held at the Samoa Police Headquarters yesterday morning to honor the promotion of six officers.

Police Commissioner Su’a Fuiavailiili Egon Keil says all six officers had to endure a vigorous process of testing in order to qualify for the promotions.

“These sworn members have taken and passed a written examination; and they have been thoroughly reviewed by an interview panel consisting of two police members of higher ranks and an independent;

Further to the stringent requirements, the Police Commissioner adds that the promoted officers are placed on a 2 year probationary period in their new roles.

“We are excited for them and expect them to be leaders whereever they will be assigned”.