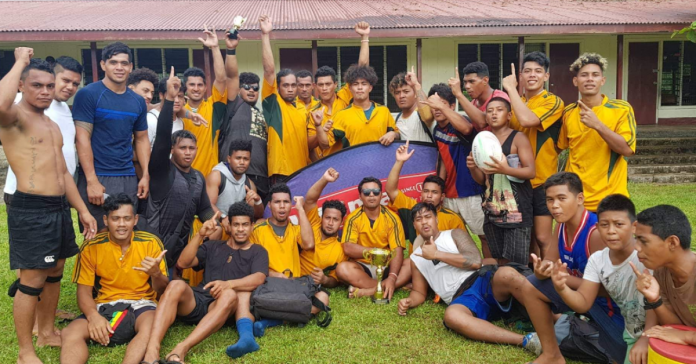 18 March 2019, Apia Samoa. Siumu has taken the trophy for the inaugural Vailima Falealili 7’s beating a developing Satalo side 28-0 at Poutasi over the weekend.

Siumu fielded 2 teams in the tournament, with both teams advancing to Cup Quarters, but ended up having to go head to head with each other in the Semi Finals. Tournament Champs Siumu 2 beat Siumu 1 comfortably 19-5 while Satalo scraped through their Cup Semi Final match against Salani 17-14.

The Plate was won by a strong Poutasi side who beat Malaemalu 15-0 in the plate final while the two teams from Saleilua took out the Bowl and the Spoon.

The team who stole the hearts of the spectators was the side from Siuniu, whose players seemed more suitable for the tight 5 positions in the 15’s game. Most of the Siuniu Tuna Fusi players were taking onto a rugby field for the first time in their lives, and despite conceding losses throughout the tournament, they maintained discipline and passion on the field against much more experienced sides.

The tournament’s success was the depth of talent displayed by players amongst the 8 villages who participated from Falealili, and the 2 teams from the Siumu district. With 12 teams, over 170 players, all from Falealili and Siumu were provided with a platform to showcase their talent.

Manu Samoa Sevens player Tofato Solia who had recently been named in the HSBC 7s dream team said that the players have long awaited this chance to play the sport that they love.

The organisers hope to bring together all of Faealili and Siumu to maximise the potential of fielding a competitive team for the Super 9 tournament where BSP Southern Tornadoes are due to play the Vikings from Savaii in the first round of the national tournament in less than 3 weeks on April 6th.