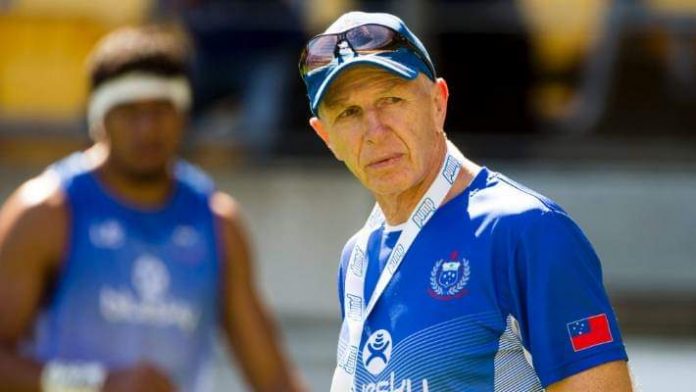 Sir Gordon Tietjens (SGT) has stepped down from his role as the Manu Samoa 7’s head coach after three and a half seasons, and Chairman Tuilaepa Sailele says this “augurs well for the future and the direction SRU want to take with its sevens team”.

A press release from the Samoa Rugby Union  (SRU) announced that Tietjens’ contract will not be renewed when it expires 31 August 2020.

“After discussions with the CEO Vincent Fepuleai, it was agreed at the completion of my contract which expires August 31 that I would no longer be accountable as the Head Coach of the Samoa 7’s team.” Tietjens said from his home in New Zealand.

The early release of the former All Balcks Rugby Sevens Coach comes as a result of HSBC World Rugby Sevens tournament cancellations due to COVID-19.

Four legs of the HSBC World Rugby Sevens series have been postponed until further notice, along with Olympic qualifiers and the Olympic Games itself.

Samoa has yet to qualify for the Tokyo Olympics which would have taken place 23 July to 8 August 2020.

Sir Gordon’s contract term would have have seen him take the Manu Samoa Sevens to the end of the Olympics.

SGT leaves the Samoa Sevens not yet qualified for the Olympics, having missed out at an Oceania Qualifier in Fiji In November 2019.

Sir Gordon took over from former head coach Damien McGrath at the start of the 2016/2017 season.

SGT failed to win a single HSBC Cup for Samoa during his term as head coach. In three and a half years Samoa Sevens made it to 11 Cup Quarter Finals, out of the 34 tournaments under Tietjens tenure as head coach.

The last time Samoa lifted an HSBC Cup trophy was in 2016 in France in a team captained by Falemiga Selesele and coached by Damien McGrath, with Assistant Coach Muliaga Brian Lima and Manager Talapusi Masunu.

According to the press releasen Samoa Rugby Union Chairman of the Board and Prime Minister Tuilaepa Sailele Malielegaoi says Tietjens decision, “augurs well for the future and the direction SRU want to take with its sevens team”.

The SRU advertised for its Manu Samoa 15s Head Coach this week and it is understood that both the Sevens Head Coach and Manager jobs will soon be up for grabs.