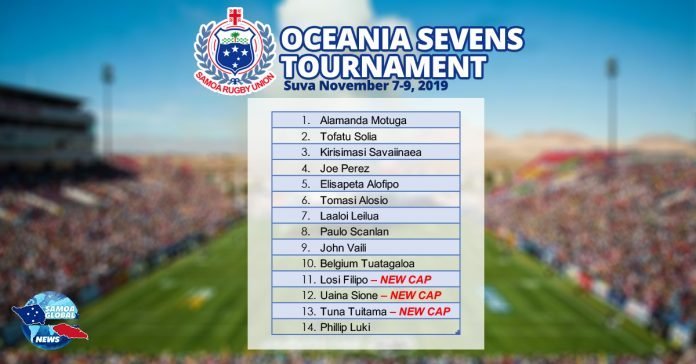 Sir Gordon Tietjens has named three new caps in the Manu Samoa Sevens squad to play at the Oceania Sevens Tournament in Suva November 7-9, 2019 which is also doubling as an Olympic Games qualifier.

Tuna Tuitama of A’ana Chiefs and Vaiala Rugby Club gets a chance to put his hand up and claim a place in the World Sevens Series squad to be named after Fiji.

Also selected for the first time is local player Uaina Sione of Tama Uli and Salelologa Rugby Club who will be hoping to solidify his position for the World Series.

The only new player from outside of Samoa is Losi Filipo who has been playing in the ITM Cup for Wellington Lions and Norths Rugby Club.

According to coach Sir Gordon, three players in Melani Matavao, Tila Mealoi and Va’a Apelu Maliko were unavailable due to injury.

He said this tournament doubles as an Olympic Qualifier for the next Olympic Games.

“So if we win this tournament, we will qualify for the Olympics, that’s what we will be aiming for,” he said.

He said the team is in it’s final week of preparations following a stint of training in Wanganui, New Zealand.

The team fly out for Suva on Saturday morning.