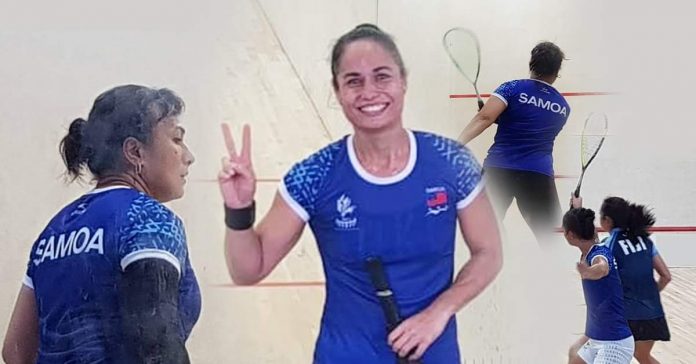 This is the first time Samoa has been able to field a Women’s Team since 2007.

“Yes I was in that team,” says squash veteran Samantha Marfleet-Manu with a smile.

Now 40 years of age, Samantha has been representing Samoa in Squash for over 10 years.

The Samoa team lost the gold medal match to a much younger New Caledonian side this afternoon but managed to upset squash powerhouse Papua New Guinea on the opening day of the tournament.

The Samoa Women’s team also beat strong teams from Tahiti and Fiji on their way to the finals.

When Samoa last hosted the Pacific Games in 2007, Samoa Squash had also won a silver medal for the Women’s team division.

Most squash followers will also never forget the excitement in Samoa Squash winning Gold for the Women’s Doubles of Alyson Sefo and Iokapeta Sialaoa.

More medals are expected from Squash with the Individuals event starting tomorrow and the Doubles event next week.