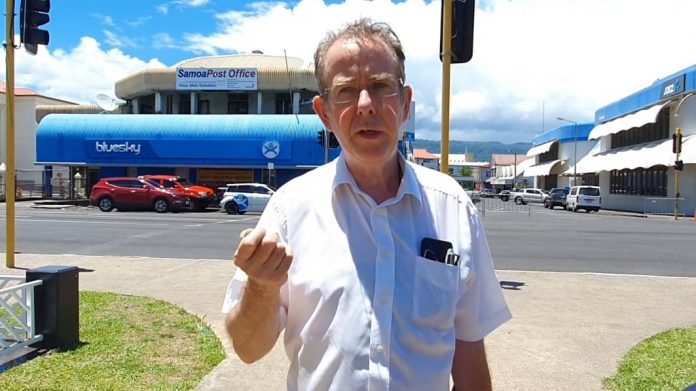 Dr Brian Deer of the UK Telegraph was stopped from questioning the Samoa Prime Minister at a press conference in Apia during the first day of a door-to-door mass immunisation campaign as the small island nation tries to combat a measles outbreak that has been exasperated by low vaccination coverage.

The British investigative reporter known for his reports on the MMR vaccine told Samoa Global News that he was trying to ask the Prime Minister why the blame for the crisis had been shifted to the people of Samoa. Deer says he wanted to ask if Tuilaepa would apologise for what he describes as “failures of Government”.

“I was trying to ask the Prime Minister a very basic question as to why it is that he is blaming his own people,” said Deer.

“He’s blaming his people for failing to bring their children to the hospital, he’s blaming parents for listening to healers, he even made it – almost as a joke, that somebody had put up a red flag when they lived metres from the hospital;

“He’s blaming parents for not bringing their children quckly enough to the hospital.”

Prime Minister Tuilaepa Dr. Sailele Malielegaoi strongly objected to Deer’s questions about blaming the Samoan people and reminded Deer that he was not Samoan and therefore could not understand.

“You’re wrong. We were not blaming them, we were educating them;

“You see, understanding the problem is a big thing, you do not know because you are not Samoan,” Tuilaepa said.

A heated debate between the Samoa Prime Minister and the British journalist followed, ending with Tuilaepa making reference to Brexit and telling Deer to “talk about your own problem before you talk about our problem”.

Dr. Brian Deer is a British investigative journalist best known for reporting on medical issues and inquiries into the pharmaceutical industry and social issues for the Sunday Times.

Winner of two British Press Awards for his Sunday Times investigations, Deer is in Samoa this week to cover the measles outbreak that has claimed over 60 lives.

“I think the Prime Minister needs to be asked and the question I would have asked if his minders hadn’t prevented me from asking my question, is whether he believed that he should say sorry for the failures of the Government.”

Deer says those responsible should have considered obvious known factors that have contributed to the tragic outbreak.

“They have known that throughout New Zealand there have been a whole series of measles epidemics;

“They know that in South Auckland particularly there is a very large community of Samoans;

“There’s daily flights in and out of Air New Zealand and other carriers into Apia, and yet they allowed this situation to develop;

“And I think the Prime Minister should be asked whether, he believes, that he should say sorry for the failures of the Government to protect it’s own people’.