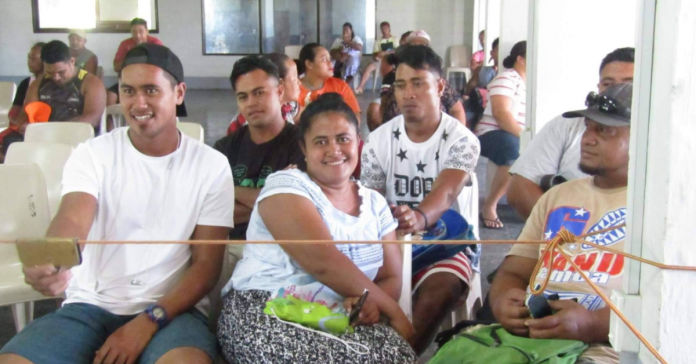 17 Setema, Apia, Samoa 2019  Tivoli Maee was one of many employed youth in Samoa who flooded the Nurse’s Hall at Motootua yesterday to submit applications for seasonal work in the United States of America and Canada as offered by the Beneficial Future of Samoa led by Faamanu Alo Vaai.

The Beneficial Future of Samoa is an organisation that coordinates short term employment in the USA, Canada and American Samoa. A representative of the firm, Enoka Sio told Samoa Global  News that they are coordinating the recruitment for 3 different companies. The Hilton Fort, Coca Cola, and a fishing boat in America Samoa called Long Line.

The registration of applicants attracted over a hundred youth to the Nurse’s Hall at Motootua yesterday morning.

Tivoli made the trip to Upolu from Vaipu’a Savaii in the hope for a future in formal employment.  He shared that he is the seventh of eight children, and he is desperate to secure formal employment for the development of his family in Savaii.

“I would like to renovate the home that we live in, and buy my parents a car, and also help with our village obligations,” he said.

Tivoli says that he used be employed by a business in Salelologa where he earned $150 tala per week, however, there was a period where he fell ill, and when he returned, his job was no longer available.

“My aunty who lives in Upolu told me about this program, she contacted me and that is why I am here today,” he said.

According to Enoka Sio, Hilton Fort and Coca Cola both offer seasonal employment terms of nine months, while a stint with the fishing boat would be for six months. He also added that the Hilton Fort hotels are seeking 600 staff while Coca Cola look to hire 350.

Hilton Fort is a 4-star international hotel chain affliated to the Hilton group.

The Beneficial Future of Samoa representative said that visa processing is handled by the requesting employer and that there are other other employers that their organisation is looking to contract in the future such as cruise ships.

“There was also a cruise ship that was interested but we hadn’t firmed up the contract with them,”

“Ten have already been dispatched to the shipping line, and we are currently preparing the first group to be sent to the Hilton Fort in the mainland USA.

Enoka Sio told Samoa Global News that the expected wages for a Cashier position would be USD$2,900 per month, not including benefits such as transport, accommodation and meals.

“The total package for that type of position would be around $5,000 USD,” he said.

Applicants are expected to submit their Curriculum Vitaes (CVs) and ensure they hold  current travel documents.  The age range for applicants is between 19 and 50.

Mr Sio said that there is collaboration between their organisation and the Governments of Samoa and American Samoa.