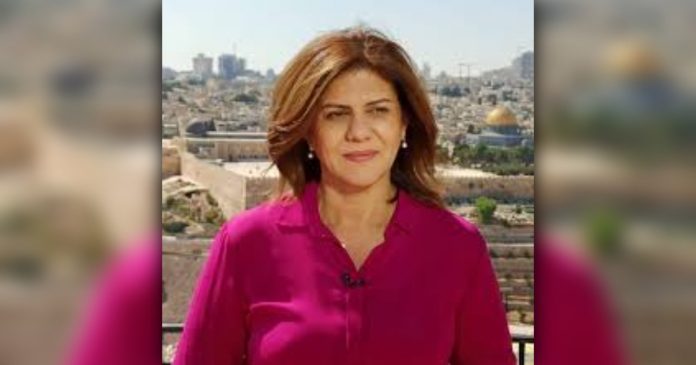 Shireen Abu Akleh, a longtime TV correspondent for Al Jazeera, was killed while covering Israeli army raids in the city of Jenin in the northern occupied West Bank. (The Palestinian territories consist of two distinct areas: the West Bank including East Jerusalem, and the Gaza Strip).

Al Jazeera producer, Ali al-Samoudi, was also wounded by a bullet but is now in stable condition.

“We were going to film the Israeli army operation and suddenly they shot us without asking us to leave or stop filming,” Al Jazeera cited Mr Samoudi as saying.

“The first bullet hit me and the second bullet hit Shireen…There was no Palestinian military resistance at all at the scene,” he added.

A video of the shooting showed Abu Akleh wearing a blue flak jacket/protective vest emblazoned with the word “PRESS” on it, as well as a protective helmet.

Al Jazeera is reporting that a long range Israeli sniper shot Shireen in the head through her ear, which was unprotected, alleging it was a precise assassination.

The Israeli President has said it was most likely Palestinian cross fire and has offered for a joint investigation into the incident. Palestinian authorities have rejected the offer.

Long range sniper shots from Israel forces are not unfamiliar to the locals and journalists covering news in the area. Also captured in the video is the sound of gun shots, while a courageous man is seen running towards where Shireen is lying and carrying the journalists body back.

According to health ministry and other Al Jazeera journalists, Akleh was rushed to a hospital in Jenin in critical condition, where she was declared dead shortly after arrival.

The head of medicine at al-Najah University in Nablus confirmed that Abu Akleh was shot in the head. He said her body was transferred for an autopsy based on an order from the public prosecution.

Abu Akleh’s body was carried out of the University coated in a Palestinian flag. She was given a State funeral by the Government today. 99è

The United Nations Secretary General António Guterres says he is “appalled” by the killing of the veteran journalist.

In a statement issued via his spokesperson Mr Guterres called on “the relevant authorities to carry out an independent and transparent investigation into this incident and ensure that those responsible are held accountable.”

“The secretary general condemns all attacks and killings of journalists and stresses that journalists must never be the target of violence,” the statement added.