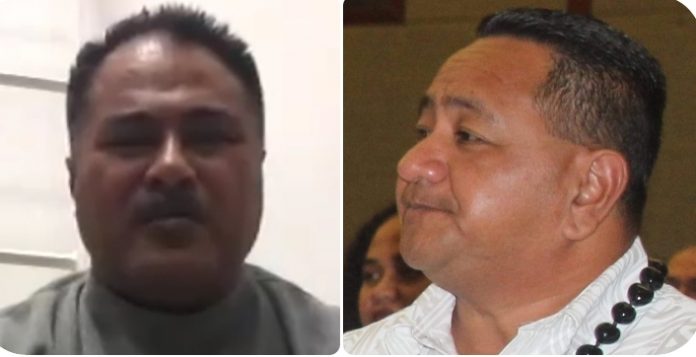 Puletiu Atoa Taulapapa Pa’õ Sa’ale Lauliliu says in a video that has been widely shared on social media, that the coronavirus pandemic has forced the closure of all cruise ship travel, leaving himself and other Samoan sailors around the world jobless and stranded with some facing symptoms of Post Traumatic Stress Disorder (PTSD).

Puletiu also claims that the Samoa Government has abandoned them and holds up a letter that he says contains a response from Samoa that they are unable to evacuate them.

He says he is docked near the Bahamas and wants more than anything to be home with his wife, children, parents and family.

He says there are around 400 Samoan Sailors on 17 cruise ships across the world, not including container ships.

“We have not worked in 3 months and we are no longer receiving pay from the MSC – Mediterranean Shipping Company,” he said.

In a TV1 Samoa interview with the General Manager Samoa Shipping Services, Lautimuia Afoa gave his assurance that SSS are in contact with the companies who employ the Samoan sailors on a daily basis, and all are safe and aware of the situation of closed international borders around the world.

“The issue with wages is only affecting those whose contract terms have ended. Those sailors should have made their way home, but got caught in the lockdowns;

“We then requested the shipping companies if they could wait out the lockdown periods on the cruise ships”, said Lautimuia Afoa.

“They are being taken care of by the shipping liners and the cruise ships are similar to staying in a hotel”, he added.

Lautimuia says they could now be stranded at unknown ports or in nations fighting to contain COVID-19, if they had been moved before the world closed its international borders.

On the issue of Samoan sailors being tested positive for CIVID-19 Lautimuia confirms that there are none at this stage. He says three were returned positive in preliminary testing, but re-testing have come up negative. Vaai says all three are well and have recovered.

The Samoa Shipping Services continues to make daily contact with the companies employing Samoan sailors and seafarers and says SSS has also explained them the reasons why they cannot be repatriated at this time.

Lautimuia said that all seafarers have been briefed on the current situation with border restrictions and the reason there are delays in bringing them home. He added that our sailors are not the only group of Samoans stranded, wanting to come home. He said any arrangements to bring them home would have to follow strict protocols to ensure that the rest of the country in not put in danger.

“There are hundreds of Samoan citizens around the world in different situations, also wanting to be home”.

Prime Minister Tuilaepa Sailele Malielegaoi also responded during his Saturday afternoon live interview, and reiterated the risks of repatriation on the national safety for Samoa.

He urged Samoa seafarers to be patient, learn to keep themselves busy, and await the opening of international borders.

He said if there were any issues with where they were staying, that they should contact SSS management who will bring matters forward to the NEOC and decisions can be made from there.

The Prime Minister said the safest place for our seafarers is on board the ships where they are being taken care of in all areas including wages. He said repartriation has many risks with the number of flights needed, so they are much safer being cared for on board the ships for now.

He urged Samoa seafarers to be patient, learn to keep themselves busy, talk with thier parents and families online and await the opening of international borders.

“We are watching the situation closely but for now they have to be patient”.