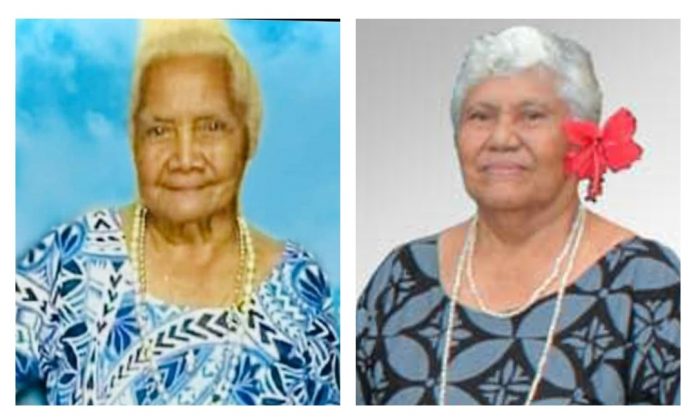 It was a dark Saturday for Lolomatauama when her 87 year old elderly cousin died in her arms during a village council meeting at Fasito’o-uta last Saturday.

Lolomatauama Eseta Fa’alata Mata’ituli is the FAST woman candidate bringing an election petition against elected HRPP candidate, Aiono Afaese Toleafoa and the case is currently underway in the Supreme Court.

In tears, Lolomatauama told Samoa Global News that her elderly cousin had walked over on Saturday morning to where she was seated inside a Village Council meeting.

She had just greeted her cousin with a hug when a matai spoke out to remind her that non matai could not be sitting there.

Lolomatauama said suddenly her elderly cousin’s head tilted and fell towards her.

“She sat down and slid over to sit right next to me and was just about to say something when we heard the matai’s warning..

“I think she may have gotten a shock when she heard the matai addressing her..

“I saw her body suddenly collapse and her head fell onto my shoulder..

“I could see that she was unconscious,” said Lolomatauama, unable to hold back her tears.

“I tried my best to perform first aid but I knew she was gone”.

Social media has been flooded with misinformation about what took place at Fasitoo-uta last Saturday, with some blaming village matai for the incident, however, Lolomatauama says that is not the case and she believes her elderly cousin may have had a heart attack.

“She must have been worried about me, and walked over to say something, but she died before we exchanged any words..”

Lolomatauama said the death of her dearest cousin, Faamao Maria Iefata Tuaautotoa, has given her the strength to continue with the Court case.

“I fight so that justice will prevail and this case is now for my dearest cousin who passed away trying to encourage to me to not give up,” she added.

Lolomatauama said the village of Fasito’o-uta has called several meetings to try and persuade her to withdraw her petition against Aiono, however, she is also insisting that the elected candidate steps down and formally resigns.

“I’ve told them so many times before that I have two conditions for Aiono to abide by and then I can withdraw, and that is for Aiono to resign from being a faipule and secondly to not run in our by-election;

“He can always wait to run in the next general election,” she says.

“This case is for you my dearest cousin and sister, you will be dearly missed”.

Lolomatauama took the opportunity to encourage the women of Samoa to step up and run for Parliament.

“All you brave women who are eligible to run in the election, please exercise your rights like I did,” she said.

Asked if there would be repercussions for her not following the request and tuualalo of the village, Lolomatauama says the Village Coucil of Fasito’o-uta has not yet reprimanded for not withdrawing her petition against Aiono.

“Whatever decision they will make against me, I’m not worried about it but this case will now proceed before the Supreme Court, because this is for my dearest sister who passed away in my hands. She will forever be in my heart.”