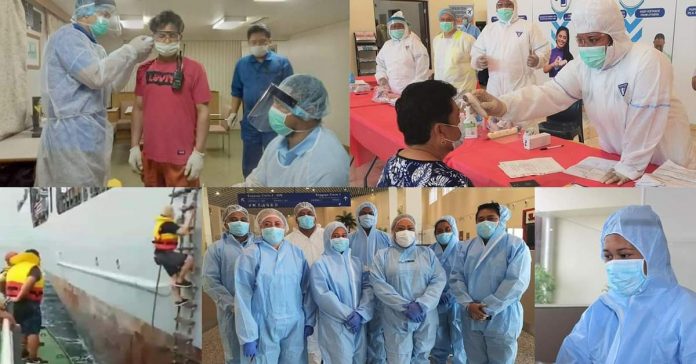 The Samoa Global News editorial team and staff have selected “Covid-19 Frontliners” as one of the groups to celebrate as ‘People of the Year’ for 2020 to acknowledge and thank.  As the year comes to a close, Samoa is one of the few countries in the world to be able to say, “We are covid19 free”.  We pause today, to truly appreciate this status, as we look across to nations still registering record numbers of cases, and where a new strain of the virus has forced even stricter limitations to movement and border shut-downs, with some countries even limiting the number of people in homes to 5 for New Years Eve gatherings!

Samoa on the other hand, has gone full circle with government announcing the lifting of public gathering restrictions, and extending trading hours for the festive season.

We pause today, to recognise the unsung heroes, the frontline workers: of doctors, nurses, police, staff of the airport, our sea port, officers of immigration, customs, quarantine, stevedoring, right down to drivers and cleaners, who have worked tirelessly behind the scenes to allow us the privileges and freedoms of movement we can still enjoy here in Samoa, as we head into 2021, Covid19 free.

We sought an interview with the Head of Samoa’s National Emergency Operations Centre (NEOC), Afioga Agafili Shem Leo, which ended up being quite an emotional session. Since taking over as interim head of the NEOC, Agafili’s leadership has been felt by the local media. The sacred Samoan tofa mamao, the utaga loloto, is evident in the way he addresses the nation, to articulate updates and explain the sometimes tough decisions that have been made.

We asked the man in charge of Covid19 frontliners to talk about the different teams; who they were, what it was like to don and doff PPE in preparation for flights or cargo ship arrivals, and what challenges they had faced as individuals, in the past 12 months.

We didn’t mean to, but our question made Agafili a little emotional, as he sat, and reflected way back to January 2020.

“It has been a very long year”, he says fighting back tears. “We went from the measles, straight into the covid.., amata mai lava ia Ianuari..”

He thanked us for considering Samoa’s fontline teams.

“Those in the frontline from the various Departments and Ministries are themselves mothers, fathers, some are grandmothers and grandfathers; sons and daughters of Samoa who have wholeheartedly dedicated their lives to serve our country with courage, and meticulousness at our borders, in the midst of our war against covid…

“They are at risk every time they’re called upon to process flights or shipments coming into Samoa..

“And not once, did we hear any murmuring of complaints from them”, said Agafili.

Samoa had just recovered from the measles epidemic which claimed over 80 lives, when world news emerged of the mysterious coronavirus shutting down China’s Wuhan province and spreading across Europe.

Government through the NEOC took swift and decisive action.

Samoa was the first country in the world to prohibit travellers to enter from a restrictive list of countries identified as ‘hot spots’ for the virus. Samoa was the first country to impose pre-departure protocols requiring a negative Covid19 test, and a doctor’s medical clearance. Indeed, Samoa was also the first Pacific nation to completely shut down, and close its borders to the world, despite the inherent risks and grave impacts this decision would prove to bring upon the economy.

“We received a lot of criticism for making some of those difficult decisions,” recalls Agafili.

With closed borders, Samoa then embarked on flight missions to bring home citizens, stranded in different parts of the world. For a small island country, Samoa could possibly be leading the world in the number of citizens repatriated per capita, with 17 flights to date, and plans for the US flight still in the pipeline. 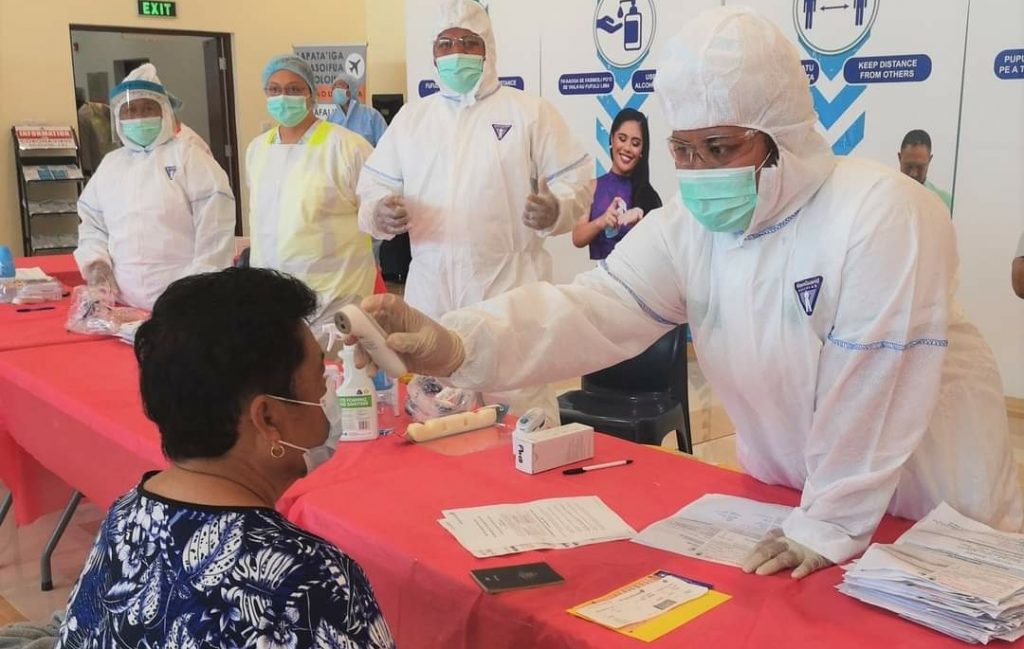 Also the Secretary for Cabinet, and Head of Samoa’s Immigration services; Agafili became emotional once again, when we asked about the operational side of border control protocols.

“When you represent your country in sports, you don your sporting equipment, you jersey, all your gear, and then you run out onto a field with thousands of spectators, clapping and cheering you on, but that is not the case in this work…

“When we go into the special donning room, and follow the strict step-by-step process of putting on personal protective equipment, it is a different feeling altogether. You know there are no excited spectators outside to cheer you on. And then all of a sudden it hits you. You start to think about the your loved ones and the people closest to you.. your children, your spouse, your parents..” 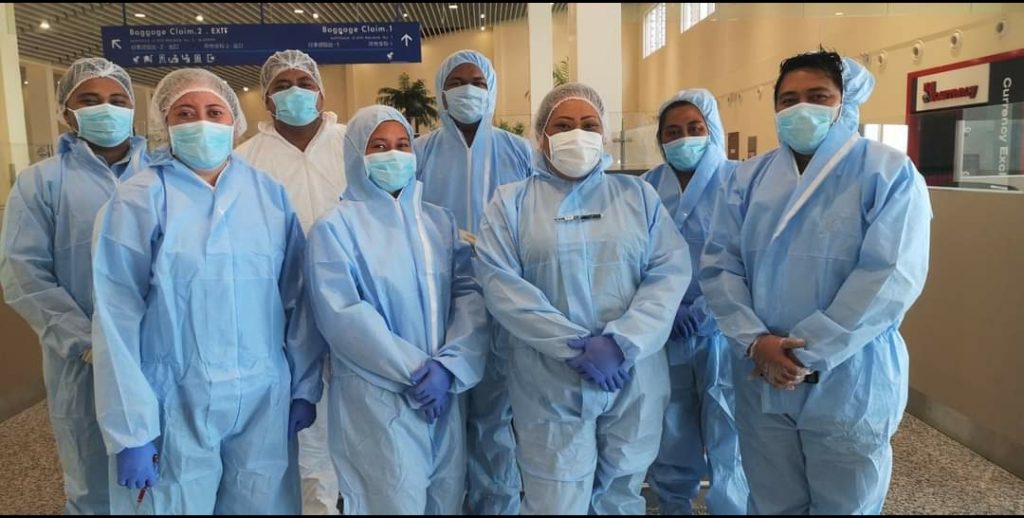 Agafili says the biggest challenge faced by frontliners was the mental strain, and thinking about the dangers they could possibly be exposing their children, their parents, their families to.

“There’s the donning, and then afterwards, there’s the doffing process. The people who arrived on the flights are probably resting in their hotel rooms for hours.. while the teams are still going through the meticulous process of donning, to ensure nothing is missed, and everything is followed to the tee”. 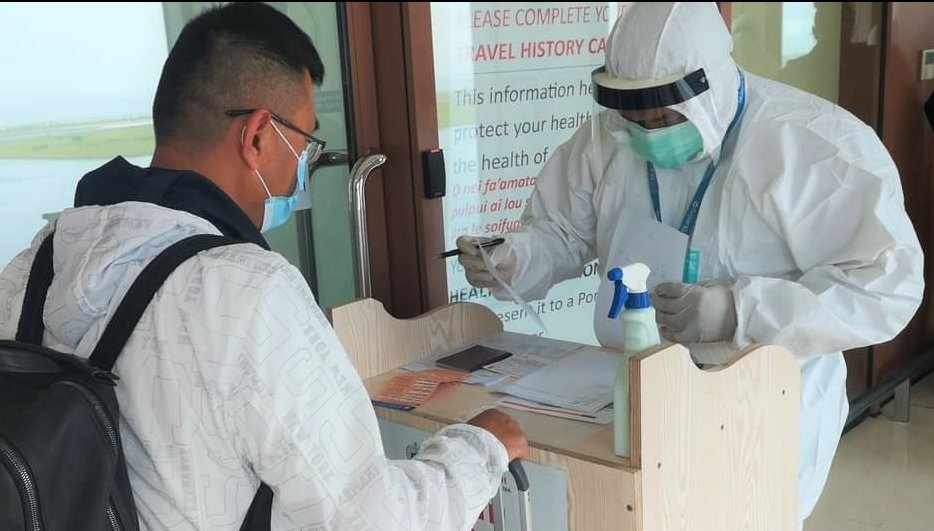 Agafili says another challenge faced by frontline doctors and nurses was the care needed by elderly who traveled alone.

“They (doctors and nurses) cared for and looked after the elderly as if they were their own parents, and some became very close after 2 and even a 3-week lockdown period for one group..”

Agafili shares that the only people who really understand the challenges faced by frontliners, are the husbands, wives, parents and children of our public servants. 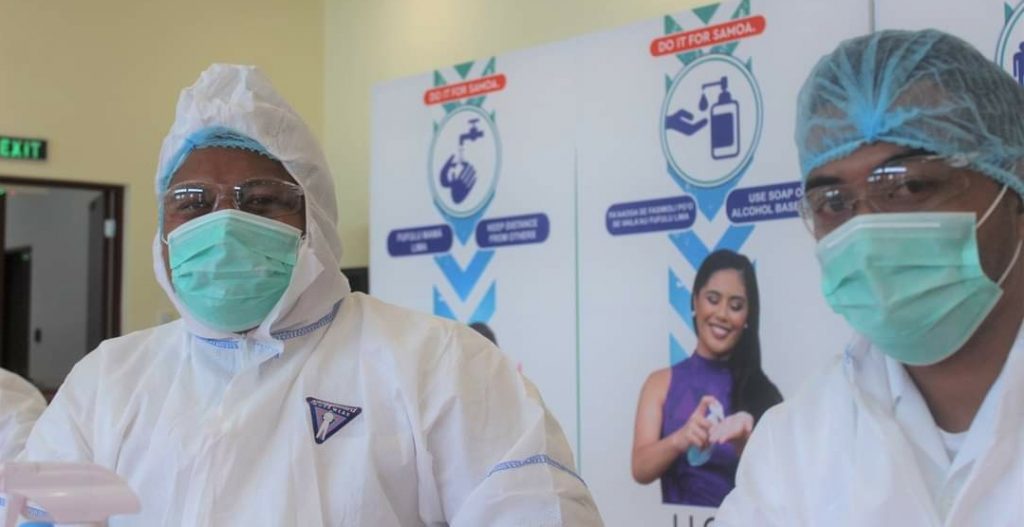 “Frontline work is sustained by knowing that your spouse, your mother and father, your children.., are cheering you on. And it is their prayers, and the prayers of the nation, that has brought us this far,” said Agafili. 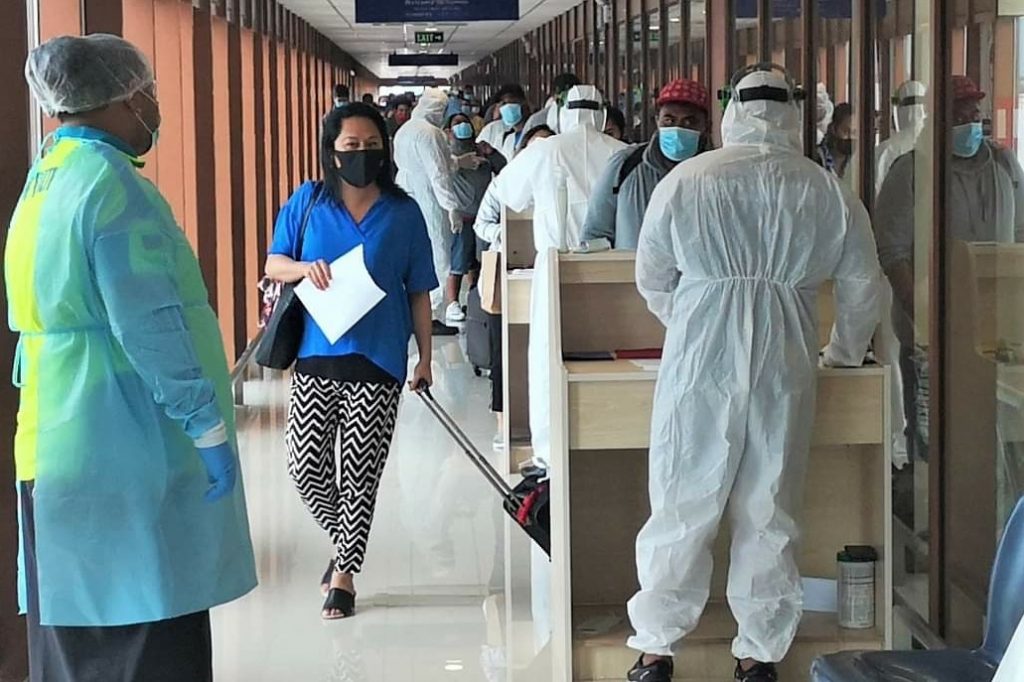 “But we also can’t help but feel that sometimes, we are putting them somewhat at risk.. when we come home.. that is why the donning and doffing process is so important..

“We thank God for giving his people the strength, because we would come to the end of a 2-week quarantine period, and then prep for the arrival of the next flight.. and at the same time, medical teams, police, quarantine, customs, stevedoring… are also being called to clear container loads of cargo shipments arriving at the wharf..

Agafili says doctors and nurses probably had it worse than others, because they were in the frontline of daily check-ups and testing of passengers.

“And at the end of the mandatory quarantine periods, they were responsible for final checks and clearances, to ensure everyone was ok to be safely released into the public..”

The Head of NEOC also acknowledged the CEO of Health, who Agafili says was always there to lead his health care workers during operations.

“And remember, for our medical teams, they still needed to uphold their roles as doctors and nurses at the hospital during all of this,” he reminds us.

Agafili ends by acknowledging God and the power of prayers by the nation.

“We acknowledge God Almighty, His hand in all of this, is the only reason we are sitting here today, covid free. We also thank the people of Samoa for their prayers, love and support throughout the year”, said Agafili.

So yes, it has been a difficult year, and yes, border restrictions continue to impact the economy, small businesses and formal employment. And yes, we are missing many of our family members who would be home for Christmas if they could. But as we head into 2021 Samoa, we have no shortage of fuel, our supermarkets are not short of daily grocery supplies, and our fireworks did arrive on time despite rumours to the contrary 🤗

So tonight, as we celebrate New Years Eve without any restrictions, as we fill our midnight church gatherings to maximum capacity, as youth groups across villages prepare their New Year concerts, as extended families gather in the tens over a cup of hot koko Samoa and panikeke falai, as fireworks displays shoot up into the sky, and as we hold our loved ones close – we spare a thought, and we offer a prayer of thanksgiving, and ask God to bless our Covid19 Frontliners.

Thank you. We wish we could publish each and every one of your names here today, and one day soon, we will. So that your great grandchildren can perhaps come across this article one day and say – hey, that’s my Papa, that’s my Mama, behind the PPE clothing, in the frontline of Samoa’s battle to protect itself from the coronavirus.