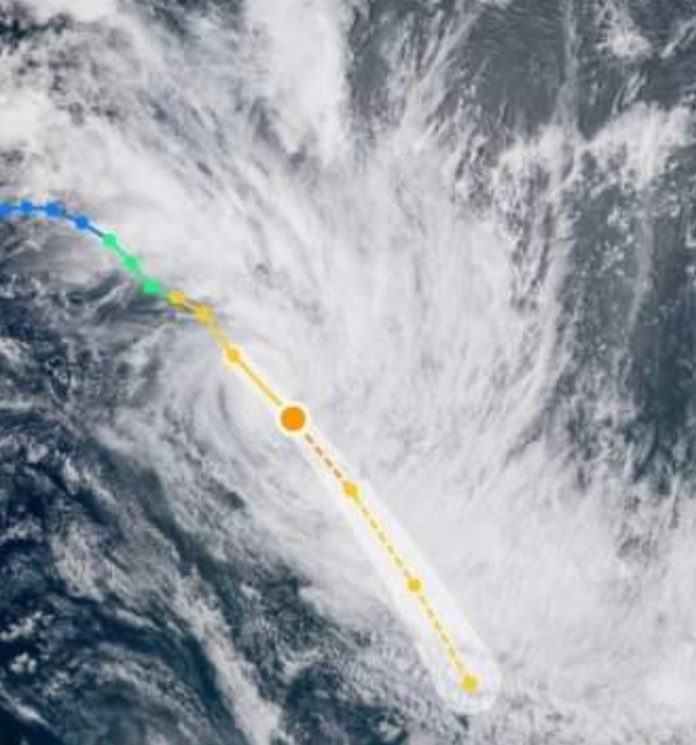 The Fiji Met Service reports that Tropical Cyclone Tino is now a ‘Severe’ Category 3 storm as it moves directly towards Tonga with “very destructive” winds up to 160km/h.

“The storm is expected to either cross directly over the island nation – or very nearby – later today/tonight with a potential direct hit from the centre”.

“Torrential rain, severe coastal flooding, damaging winds which can destroy weak buildings entirely plus dangerous seas and storm surge can all be expected across Saturday and tonight”.

Flooding has been reported in parts of Vanua Levu and Taveuni.

The storm a category 2 as it passed over Fiji but has further intensified to category 3 this morning with average winds up to 160km/h, described as “very destructive” by the Fiji Met Service.

Samoa has been spared as the storm trajectory shows it’s path moving away from Fiji towards the Kingdom of Tonga.

Two years ago in Feb 2018, Tonga was left devastated by severe Tropical Cyclone Gita categorised as a 5 with wind speeds of up to 230km/h. Gita was the most intense tropical cyclone to impact Tonga since reliable records began, causing damage of approximately $220.9 million USD.

WeatherWatch.co.nz says offshore storms will affect neighbouring Pacific Countries and Cyclone Tino is now moving in quickly from the North West and is stronger than originally forecasted.

Tino is the third tropical cyclone over the season – which runs from November to April – following Cyclone Sarai which struck both Tonga and the Lau Group in Fiji just a few weeks ago, and Cyclone Rita which formed at the end of November.

Normally about 10 tropical cyclones form in the Southwest Pacific Basin over the season.

Tropical cyclones are categorised in strength from 1 to 5, 5 being the most intense.

Tropical Disturbance 08F Tends to Move Further Away from Samoa

TC Tino No Longer Poses a Threat for Samoa

Phil Collins at Mission concert: Let it rain down!

Regional Director for WHO Supports the Health Sector Merge

Tropical Disturbance 08F Tends to Move Further Away from Samoa