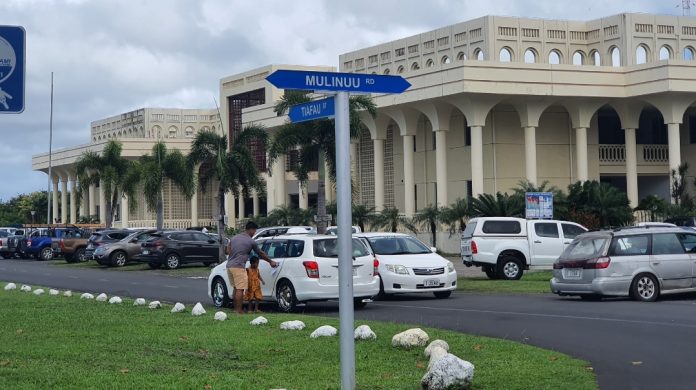 Two young men called before the Supreme Court of Samoa during criminal mentions this week have become regular offenders, with criminal activity becoming more serious each time they are caught.

Cousins Etimani Napoleone and Paino Napoleone Manuleleua are both under 21.

Prosecution, Ms Lucy Sio-Ofoia told the Court that the pair have a long list of previous convictions including endangering transport for throwing stones at police vehicles, robbery and actual bodily harm.

This week they faced charges almost identical to their previous convictions, with arson now included.

The youth were asked to enter pleas on nine charges of again endangering transport, robbery, actual bodily harm and this time, attempted arson and throwing stones were added to the list.

Justice Fepuleai Ameperosa Roma asked the two young men if they wanted a lawyer to represent them in Court. They both responded “no” and that they were ready to enter pleas to all nine charges.

According to the Police Summary of Facts, on the 14th of February this year, the two suspects allegedly threw a lit bottle of kerosene towards a house at Tulaele.

Etimani pleaded guilty to the charges of robbery and causing actual bodily harm and also attempted arson and pleaded not guilty to endangering transport (throwing stones at a police vehicle) and armed with dangerous weapons, namely stones.

Paino also pleaded guilty to attempted arson and robbery and pleaded not guilty to endangering transport and armed with dangerous weapons.

Ms Sio requested for the defendants to remain in custody due to the long list of the similar offences committed in past years.

Justice Fepuleai agreed with Prosecution and set an urgent hearing date next week on the 19th October for the two young men.

A study on “Urban Youth in the Pacific” identifies prevalent forms of youth crime in Samoa to include burglary, theft, narcotics and assaults.

According to that research endorsed by the Pacific Island Forum Secretariat, “Risk factors create an environment which increases the likelihood of young people becoming involved in criminal activity. The most commonly agreed upon risk factors during consultations include unemployment, break down of families, lack of good role models, and urban migration. Additional factors, such as globalization, urbanization, drugs and alcohol, might exacerbate young people’s likelihood of engaging in crime and/or violence. Nonetheless, young men and women have demonstrated they can be resilient against these
negative factors through the existence of good role models to give advice, strong family/
cultural ties and opportunities for employment and training”.