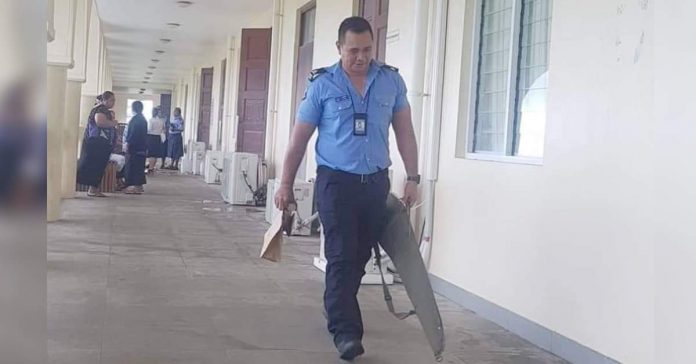 17 May 2019, Apia Samoa. The 12 gauge shotgun that allegedly caused horrific injuries to a woman’s face was unregistered according to the testimony of Senior Sergeant Tagaloasa Toddy Iosefa in the Supreme Court yesterday.

The head of the Tactical Operation Station responsible for the registration of firearms in Samoa gave evidence in the trial of Peter Tulaga accused of shooting 34 year old Frysna Rimoni in the face in January this year.

Tagaloasa told the Court that a firearm registered under Peter Tulaga’s name was transferred to Aiono Paepae in 2016.

“The shotgun recovered from the place of the incident was not registered.”

During cross examination defense counsel Lefau Harry Schuster produced a piece of paper from the Ministry of Police allegedly signed by Tagaloasa granting permission for Peter Tulaga to purchase ammunition for his 12 gage shotgun in 2018.

“That is a document that allows Peter Tulaaga to purchase ammunition for his weapon;

“How can he be issued this if he did not own a weapon?”

Senior Sergeant Tagaloasa told the Court that in order for them to allow the person to purchase ammunition the buyer must have a license.

Tagaloasa questioned the authenticity of the permission document adding that there should have also been a Ministry of Police stamp on the document to show the date of issuance.

Prosecution also presented evidence by a ballistic expert from New Zealand who testified that the 12 gauge shotgun recovered and submitted into evidence by police was the weapon used in the incident.

Peter Tulaga is facing charges of attempted murder, armed with a dangerous weapon, possession of an unregistered firearm and one alternative charge of causing grievous bodily harm with intent.

Tulaga has pleaded not guilty to all charges against him.

Yesterday Frysna Rimoni gave evidence via live video link from Manukau District Court in Auckland New Zealand where she had been evacuated in January  to receive medical treatment after the alleged incident.

Ms Rimoni’s evidence was given in closed Court by application request of Prosecution.

The trial continues in the Samoa Supreme Court before Justice Leilani Tuala-Warren.