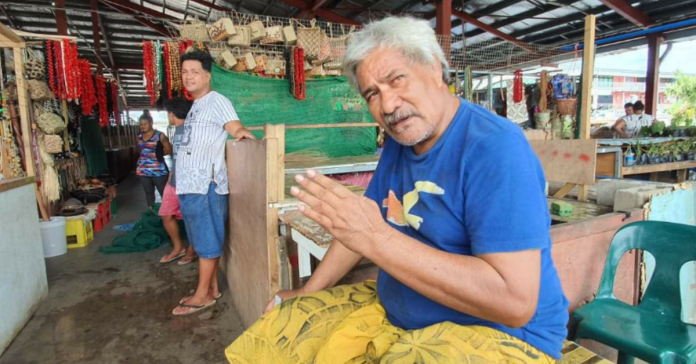 As the Government’s $66.3 million tala stimulus package was being debated and mostly praised in Parliament by various MPs, a handicraft stall owner at the Savalalo market in central Apia was counting the $5 tala he managed to earn in sales for the day.

“But now, it’s dead here at Savalalo, noone is buying,” he says.

Since the necessary lockdowns and border restrictions imposed to stop the coronavirus from entering Samoa, Mareko’s gross earnings have dropped by more than 97% – to an average of $20 tala per week says the father of five.

“For two days last week, my children and I went home with nothing! no sale for the entire day,” said Mareko.

When Samoa Global News visited the long-time market stall owner at about 3.30pm on Tuesday afternoon, his children were packing up the stall in line with the 4pm curphew imposed by Samoa’s coronavuris state of emergency orders.

Mareko sat grimly on a bench in an empty Savalalo marketplace and pulled out a $5 tala note to show us what he had earned that day.

The 59 year old has been operating a stall at the Savalalo market for over 30 years. He started when he was in his 20s, and says his clients have been tourists, visiting Samoans as well as locals.

Handicraft sales are high during times of festivals, conferences, sporting events and matai bestowals, and is generally steady throughout the year. The coronavirus shutdown has stopped all such events and activities, meaning no income for his small business.

Suppliers for Mareko’s stall include mothers working from home – all part of Samoa’s extensive informal sector.  He is now unable to buy any more from them.

“This is our livelihood, this is how I have been able to earn a living for my family, for my children, and for my church and village obligations,” he said.

Referring to his days’ earnings of $5 tala, the Vaitele-Uta resident says transport costs since the lockdown has also been a struggle.

“With no buses, we have no choice but to catch taxis to work. He sarcastically adds that taxis could be asked to take them for a certain amount and then drop them on the side of the road to walk the rest of the way.

Mareko says taxi drivers have been carrying the burden of their transport costs, because they allow IOUs, but says that is unfair to taxi owners who are aslo struggling at this time.

On the same day, Parliament held a special sitting to receive the second supplementary budget of this financial year; a stimulus package aimed to cushion the devastating effects of the coronavirus pandemic, likened to a Social and Economic Tsunami, says the Hon Minister of Finance in his address.

Sili Epa Tuioti in presenting the supplementary budget said, “The social welfare and prosperous future of any nation therefore relies heavily on the policy actions and decisions to be made by its leaders. It is our belief that the solutions to ensuring the future of this nation lies within our borders and we have at our fingers the necessary tools to ensure smooth sailing for our economy that will secure a quality of life for every citizen”.

But Mareko Mareko says the stimulus package is unfair and he feels that it does not distribute funds to families like his who are affected by the coronavirus shutdown.

He gives the NPF pensioners as an example, with the stimulus package offering a one-off $300 tala to be added to the usual $145 received by all those who are 65 years and above.

He said such discounts are of no use to him if he is unable to get money in the first place, to pay his bills.

“And what exactly am I going to pay the electricity and water bill with? when I don’t have any income?”, he says with a tinge of anger in his voice.

In his view, there are many areas that do not apply to a micro level business owner like him.

The benefits should be evenly distributed to help all citizens of Samoa.

Reminded that his small business would benefit from the Samoa Land Corporation offer of 2 months free rent for all tenants of Savalalo market, Mareko says 2 months is not enough and asked if that was backdated to March.

“Does that include March? Because it started to get very slow from the beginning of March. So if that starts in April, then the question is, how do I pay for March?”.

After 30 years as a ‘block owner’ Mareko is now unable to meet his daily payment of $10 tala per day to the Samoa Land Corporation.

Others with blocks at the market shared similar stories.

The government’s stimulus package sets aside $20.3 million for Samoa’s health sector response including the construction of ‘negative pressure rooms’, $12.5 million targeted to enable the private sector, and $27.5 million dedicated to secure the purchasing power of citizens of Samoa. There is also $3.5 million allocated to the Agriculture sector that includes support for SROS and $2.5 million to assist other response sectors of government.

Calming down a little, Mareko says he will remain faithful to God, and with Easter coming up, he looks forward to the celebration of the resurrection of his Lord and Saviour.

Adding the typical Samoan sense of humour, Mareko and others around started to poke a little fun at the bloopers and blunders during the parliamentary debates, where bible verses were misquoted several times by Members of Parliament.